I Will Tell You #79:
5 More Random Thoughts About Zombies and Other Stuff 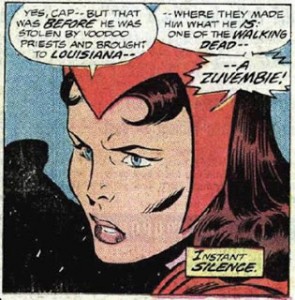 Zombie? You Can’t Say That!
Hard to believe by today’s standards, but true nonetheless; the now-moribund Comics Code Authority prohibited the use of the word “zombie” in comic books, a provision that persisted as far as the late 1970s. Which was kind of odd, as comics were getting away with dropping in some PG-rated profanity at the time, but not the Z-word. Although it was apparently OK to substitute another Z-word that far fewer people knew of, but meant the same thing: “zuvembie”. Say what? At least, that was my reaction, when the Scarlet Witch used the term in an issue of The Avengers back in the day, in reference to the just-resurrected Wonder Man. Who wasn’t really a zombie at all, but actually brought back to life. Well, this bass-ackwards logic was an early example, and only one of many, that showed the CCA was pretty stupid and useless. Zombie zombie zombie! Take that, CCA. 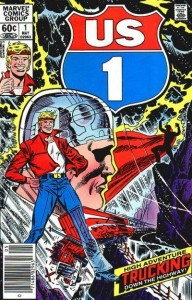 A Little Known Fact About Me
Around the same time, when I was 14, I went out as a zombie for trick-or-treating. At least, I tried to look like a zombie. My mother had bought me this way-cool make-up kit at Toys R Us that let you make up all of these gross-looking scars, cuts, welts, etc. by mixing up this compound that you would pour into a mold and let set; when it was done, you removed them from the mold, applied them to your face or wherever with spirit gum adhesive, and colored accordingly with the supplied make-up. So I did all this on that Halloween night prior to trick-or-treating, and I think it actually looked pretty good. Until, that is, when I stepped out the door on that freezing cold night, where the cold temperatures contracted the applied scars and whatnot, which started to peel and fall off my face before I even reached the end of the street. I went from looking halfways scary to totally comical within 15 minutes, even though, when you think about it, body parts do fall off zombies, right? So I could have argued that it was all planned and was actually more realistic, but I knew better. It was pretty humiliating, and to date was my only foray into zombiedom. For the full story, see my old Halloween column here. 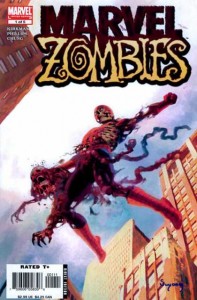 Marvel Zombies Re-Imagined
During the 1980s, to be called a Marvel Zombie was not a compliment. It was instead meant as a slam to fans who purportedly bought every Marvel comic, and only Marvel comics, no matter how good or bad they were, whether they read them or not, simply because they were Marvel comics. Of course, like a zombie, the term was resurrected a few years ago when Robert Kirkman took on the first Marvel Zombies mini-series, which expounded on the stories of the zombified Marvel characters first created by Mark Millar and seen in Ultimate Fantastic Four. And because of the popularity of this series, the phrase has been successfully rebooted and is now seen as a good thing. By most people, anyway; I have a long memory. And I hated Kirkman’s series. 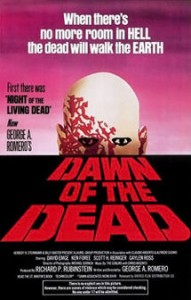 Another Little Known Fact About Me
I also hate George Romero’s Dawn of the Dead. Hate it hate it hate it. Why, you ask? I will tell you, although the full story is best told in its own column, which I’ll do at some point, if anyone’s interested. I was 17 and in high school when I saw this movie at a midnight theater showing. It was a time where every adult I knew was constantly telling me that hard work and diligence pays off, and a time where a few jerkwads in school who clearly didn’t think this way were trying to make my life miserable. Dawn of the Dead told the story, of these four responsible adults working hard to make a safe haven for themselves, only to have a bunch of jerkwads step in and take it all away. This bugged the crap out of me at the time, sending the exact opposite message that I really needed to hear. It isn’t fair to the movie itself, I realize, but nonetheless, I can’t watch without remembering how it made me feel back in the day. So I don’t. 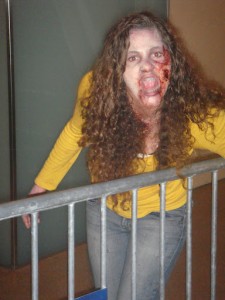 Will zombies always look like this? In this case, I’d be OK with that.

So What’s Next?
George Romero established the modern day template for zombies 45 years ago, and since then in pretty much every story, zombies are slow-moving flesh-eaters who can be put down only with massive head trauma. Nothing wrong with that; it works for me and just about everyone else. But, one has to ask: what’s next? Is it always going to be this way, or will someone else step forward with a new movie or TV show or comic that will revolutionize the genre once again? You listening, JJ Abrams? David Fincher? Quentin Tarantino?

OK, that’s five. But wait; I thought of one more! Time for a bonus round! So:

Yet Another Little Known Fact About Me
I fist-bumped Rob Zombie during San Diego Comic-Con last summer.

If you have any of your own random deep thoughts about zombies and all things related or not, I’d love to hear ‘em. Just add your comments below!