This week I’ve pulled out Phantom Stranger # 4, cover dated December 1969, from D C Comics.  The cover is by Neal Adams, but is not up to his usual standards, at least in my humble opinion!  The story is entitled; “There is Laughter In Hell This Day” and it is written by Robert Kanigher and is drawn by the afore mentioned Mr. Adams, who provides the pencils, and the inks are provided by Bill Draut. 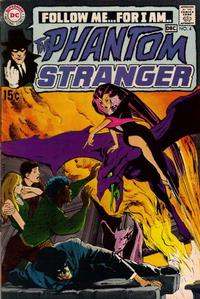 The story opens with the Phantom Stranger introducing the story, which features Dr. Terence Thirteen, with his wife, Maria, in Haiti, investigating a voodoo event one evening, though the comic doesn’t actually mention voodoo, due to the Comics Code rules that existed in 1969.  The “cultists” are chanting for Tala, and they witness an unknown tourist leap from high atop a waterfall.  Dr. Thirteen leaps in after him in an attempt to save him, but is unable to find the man beneath the falls!

The next day, Dr. Thirteen oversees the closing of an underground tunnel beneath the falls with explosives to prevent anyone else’s loss of life.  Though unobserved by anyone, rising wraith-like from the “bubbling black waters” is a creature of “unearthly evil and dazzling beauty!”  And if you haven’t guessed, it’s Tala, who should not to be mixed up with, Talia, from the Batman line of comic books!

Shortly thereafter, Dr. Thirteen and his wife fly back to New York, to explore a reported haunted house!  Tala seeks to crash the plane the Thirteens are abord, but the Phantom Stranger makes his appearance and prevents it from happening.  Tala has blacked-out New York City and the airport, but with the Stranger lighting the way, the plane manages to land safely!  Tala confronts the Stranger, but she chooses to flee.  Thirteen rushes to confront the Stranger, as well, but the Stranger simply fades into the mists and darkness.

The scene shifts to the next day, where we find four teenagers who acquire a book that is said to raise the dead!  They enter the very haunted house that Dr. Thirteen plans to check out and one that Tala has decided to occupy!  Over the next few pages we see the Phantom Stranger protect the teenagers and he then calls forth Tala.  She offers him the chance to rule at her side, as she can be his Helen of Troy, or Scheherazade, or Cleopatra, but he manages to to turn aside her offer, as well as, her kisses!

It’s at this moment that Dr. Thirteen arrives at the house and they both discover a woman walled up inside the walls of the house!  And somehow, she’s still alive!  Don’t ask how, Kanigher  simply states that she has been in a state of suspended animation, through Dr. Thirteen’s lips.   She tells her story, of coming to visit her fiance in the late 1860’s, to tell him that she has fallen in love with another, only to have him strike her down and wall her up inside the wall for a hundred years!

She then dies and the house falls apart around the all, in an inferno of destruction!  They all safely make it outside, but Tala is seen laughing atop the house, but was it an illusion or real?   The next evening the Phantom Stranger and Dr. Thirteen meet at the woman’s grave and the always doubting Dr. Thirteen is left alone as the Phantom Stranger disappears in a flash of lightning!

I personally feel that there was no real resolution to the whole Tala story and that the ancient woman in the haunted house story was almost a “bait and switch”!  I believe this was intended to create a new re-occurring villainess to face off against the Stranger in future issues.  Adams art was serviceable, but a far cry from his Batman and Deadman work for DC comics and miles away from the artwork he provided for his short stint doing the X-Men for Marvel Comics around the same time!  Therefore I only give this comic a rating of two (2) out of five (5) Legion Flight Rings!