First things first, Happy Birthday to Barry Windsor-Smith, born this day of May 25th!  And in honor of his birth, I’m reviewing the Conan the Barbarian story in Marvel Comics‘ magazines Savage Tales # 2 & 3.  The comic book story is an adaptation of the Robert E. Howard tale; “Red Nails”, which was first published in the pulp, Weird Tales, in the July, August, September and October 1936 issues. 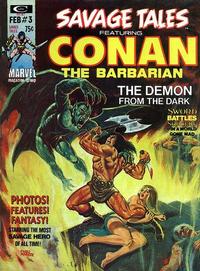 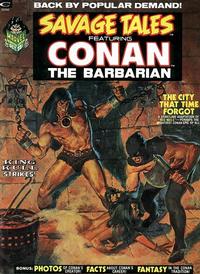 The cover to Savage Tales number two, is a painting done by John Buscema, featuring a chained Conan in a dungeon, while an executioner threatens a naked woman, as you can see on the cover on the left.  The magazine is cover dated October 1973.

The cover to Savage Tales number three, is drawn by Pablo Marcos and John Romita and features Conan fighting off a winged demon, in defense of another cowering female, seen above right.  The magazine is cover dated February 1974.

The adaptation is written by Roy Thomas and drawn by Barry Smith, prior to changing his name to Windsor-Smith.  From what I have been able to determine, Smith inked all but two pages of the forty-six page story.  Marcos only inked the last two pages of the story in Savage Tales number two!

The lengthy story begin with the swordswoman, Valeria of the Red Brotherhood.  She seems to be lost in a forest and she climbs up onto a mesa to see if she can determine where she is.  See spies a mysterious walled city about a mile away.

As she descends to retrieve her horse, Conan surprises her.  He has followed her from the city of Sukmet and wants to know why she has not taken up his offer of “mutual admiration”.  She pulls her sword on him and it’s at that momnent that they here the screams of their horses!  They investigate only to be set upon by a dragon!  Smith draws the dragon like a Stegosaurus actually!  Thre dragon drives them back upon the rock outcropping.

Using his wits, Conan makes a spear, with his sword and a branch, and dips it into some handy poison apples and disposes of the dragon.  Actually it has only caused blindness in the dragon, as they soon find out, when they set off for the walled city!  Of course the dragon has other senses and blindly crashes after them.  Conan is forced to go one and one against the dragon and comes out on top!

Valeria and Conan make their way to the city and enter, hoping to find treasure.  Once inside they find the city is seemingly made of Jade!  As they explore the empty city they split up for a time.  During Conan’s absence, Valeria spots another person in a great hall and watches him find a dead companion.  She continues to watch as the person is threatened by a glowing skeleton.  She engages and kills the apparition, only to discover it’s only a man in a “glow in the dark: costume of some sort, with a weird glowing skull.

The skull has some kind of weird mental powers and Valeria is almost overcome by the power of the skull, but she manages to smash it to pieces ending it’s spell.  The man she rescues wants her to go with him, but she convinces him to look for Conan.  Thus ends the first past of “Red Nails”!

The story continues in the next issue and it opens with Conan finding Valeria, and her new friend, battling against four foes.  He joins the fray and the foes are quickly dispatched.  Techotl, the man Valeria saved from the skeleton costumed foe is thrilled by the death of the others and takes them to what remains of the city of Tecuhltli remaining inhabitants!  There they find the Prince Olmec and the Princess Tascela.  They tell our heroes the history of their city and how it was divided and the outcome of the civil war that has raged for centuries.

But all is still not right in Tecuhltli, as Valeria and Conan discover!  They are forced to defend their new friends in a battle against their age old foes and Conan agrees to take the battle to the other side.  Meanwhile the Prince comes on to Valeria and Valeria is captured by the Princess, who has designs of her own!  Apparently she wants to sacrifice Valeria so that she can maintain her own youth.

Conan makes his way back in time to interrupt the sacrifice and at that moment, a madman thought long dead makes his appearance looking for vengeance on Prince Olmec and Princess Tascela.  He has some sort of power-ray scepter that fires fiery bolts that end in contact with metal.  Conan is forced to battle this madman and eventually wins, only to find himself between the Princess, who has the scepter and a metal door.  But before she can use it against the wounded Conan, she is struck down from behind by Valeria!

The last panel has Conan and Valeria walking off into the sunrise, empty handed of any treasure, but still alive and together!

A great long tale that Thomas and Smith did a great job delivering to a comic reading public!  Smith’s art is gorgeous and Thomas script true to Robert E. Howard’s original tale!  I give it four (4) out of five (5) Legion Flight Rings!