Greetings and salutations all, and welcome back to another edition of my RETRO REVIEW column!  This week I’ve pulled out a little known comic from Charlton Comics.  It’s Space: 1999 # 1, cover dated November 1975.  It features a pretty nice painted cover by artist, Joe Staton.  Take a look: 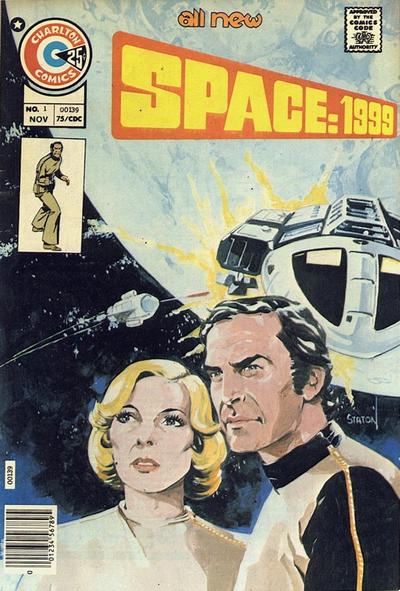 The comic itself is based on the British television show, also entitled; Space: 1999.  The television show was aired in America  for two season back in 1975 and 1976 and featured American actors, and real life husband and wife, Martin Landau and Barbara Bain.  Landau played Commander John Koenig and Bain played Dr. Helena Russell.  They were joined by fellow cast members, Barry Morse, who played Science Advisor, Professor Victor Bergman and Nick Tate, who played Chief Pilot, Alan Carter.  Here is a picture of the cast from the first season; 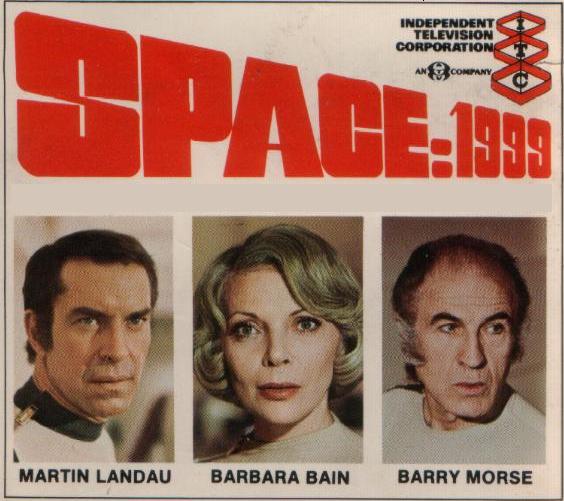 These were the characters in the Charlton comic book, as well.  The first issue was written by Nicola Cuti and was both pencilled and inked by Joe Staton.  The story in the first issue was entitled; “Moonless Night” and basically adapted the origin section of the first episode of the television show.  The comic also included a two page text story entitled; “The Kammerer Effect”, which was written by Cuti and illustrated by Tom Sutton.

This issue opens by setting the scene with a caption that basically says; it’s September 13, 1999 and John Koenig has just taken command of Moonbase Alpha, which has a population of 311 people.  His mission is to determine why crew members of Alpha were dying of radiation, when there was no radiation present!  The story goes on to reveal that the Earth has been sending it’s Nuclear waste to be disposed of, i.e. stored, on the moon!

The moonbase and it’s ships are being affected by mysterious magnetic forces, which also cause the Nuclear waste to explode, sending the moon itself hurtling through space!  Without any real reason being given, Koenig says; rather than evacuating and trying to return to the Earth, they must look for a new home in space.

So their mission is now to look for a habitable planet, as the moon wanders through space as a free body, or as a giant star ship, as the comic puts it!  Quickly they come across a planet apparently named Pearl.  Koenig, Russell, Bergman and Carter travel down to the planet to explore and determine if it will support human life.

They are attacked by giant slugs and Dr. Russell is captured and taken below the surface of the planet.  The three men follow and after battling a couple more giant slugs, reach a city beneath the planet.  Carter is separated from the other two, who continue on.  Koenig and Bergman are set upon by other humanoid creatures and Bergman is felled.  Koenig tracks Dr. Russell and is himself, again attacked by multiple slugs.  Before he can kill any more, Dr. Russell appears and explains that the slugs are intelligent and that she and Professor Bergman are fine.  Explanations are given and the reader finds out that each slug is an entire city of minds and the slugs offer to turn the 311 remaining humans into a slug, so that they can live with them on their planet!

Koenig and company don’t think this is a very good idea and leave the planet with the lesson learned that they may run across the most bizarre creatures in their travels, but they should first learn if they are intelligent species before assuming the worst!  I guess that’s a lesson we all can take to heart!

Joe Staton drew the first two issues, then John Byrne, drew issues three through six, which was some of his earliest professional comic book artwork, then Staton returned to draw issue number seven, which sadly, was the final issue.

At the same time for the regular comic book series, Charlton also published an eight issue Space:1999 magazine.  I only own the first issue of this run, so I’m not really qualified to review that series.  That first issue was written by Nicola Cuti and Joe Gill and was drawn by Gray Morrow.  The comic book series ran from November 1975 through November 1976 and the magazine series ran from November 1975 through October 1976.  So neither series lasted as long as the actual television series they was based on.

And one other thing of note was that Power Records also issued a Space: 1999 record and read-a-long comic.  It’s number PR-29.  Here’s that package: 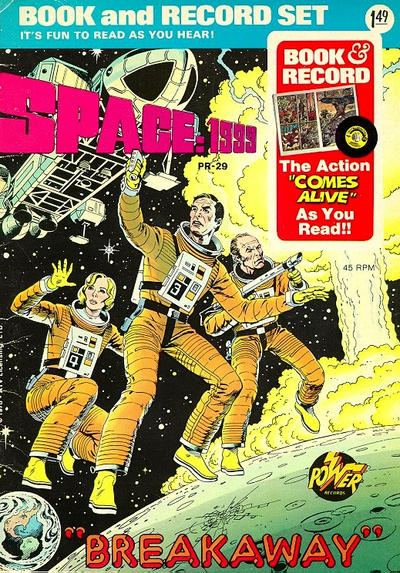 Please come back next week for another Fabulous Find!  See ya then!