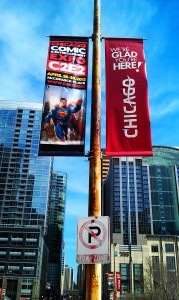 The show features its usual mix of retailers selling comics, trade paperbacks, toys, and other pop culture items, but the emphasis remains on back issue comics, as is the show’s tradition. This year, a seemingly expanded exhibitors floor included a new location for Artists’ Alley, in a large dedicated area on the left hand side of the exhibit hall, as seen from the show’s entrance location.

Traffic in Artists’ Alley was healthy, as artists such as Greg Horn, Art Baltazar, and Billy Tucci saw their usual stream of fans crowding around their tables. Horn had no less than five new con-exclusive prints available for sale, and Baltazar’s new Aw Yeah Comics! Publishing venture drew additional interest.

Crowds overall were also healthy, quickly filling the hall once it opened, but not crowding it to the point where passage was difficult. Fans seized upon retailers steeply discounting trade paperbacks and graphic novels, and comics retailers displaying recent back issues also showed brisk traffic.

The recent Boston Marathon bombing was clearly on staff organizers’ minds, as for the first time, attendees had to allow any bags or backpacks to be searched upon entering the hall. Signs at the front of the hall also urged observant fans to report any suspicious activity to convention security. 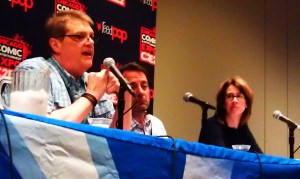 There was also the usual array of programming from various comics publishers, including both Marvel and DC Comics. Although DC did not formally exhibit at the show for the first time, one of their panels included the slightly different DC Comics 101, which was helmed by DC’s Vice President of Marketing John Cunningham, Editor-in-Chief Bob Harras, and Editorial Director Bobbie Chase. Cunningham stated that the intended audience for the panel was new fans and readers, giving a more broad-view look at DC Comics and related media. One of the related media that was discussed was the new CW TV Series Arrow, which Harras said he liked for the same reason he liked DC’s current New 52 version of Green Arrow; because both are intended to attract a new audience to the character. Cunningham also made mention of the new Injustice videogame, which he stated was a game that actually told a real story, and one that could be enhanced by reading the digital-only comic of the same name that ties into it.

During the panel, a brief teaser clip was shown for the upcoming Beware the Batman animated series, which didn’t show the character but featured a brief dialogue snippet that preceded an abrupt ending to the clip, leaving an awkward silence in the room rather than the anticipated cheers. Cunningham mentioned that the series is going to feature some of Batman’s more recent villains from the comic, such as Grant Morrison’s Professor Pig, to try and introduce audiences to characters beyond the usual rogues gallery used in various adaptations into other media. This also met with an atypical silence from the crowd.

Once again, it was a strong opening for this weekend’s show. Check back for an update tomorrow evening. 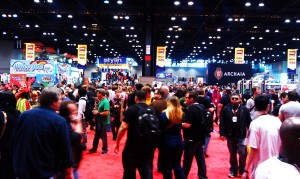 Much larger crowds on Saturday.

Convention organizers were caught somewhat unaware upon the opening of the show’s second and anticipated busiest day, as hundreds of fans massed outside of the exhibit hall entrance before being hastily organized to a line that stretched through McCormick Place’s west building concourse. And once organized, the line moved slowly due to security undertaking brief inspections of every bag brought inside by attendees.

By early afternoon, the huge crowd moved slowly through the congested the hall. Traffic was slowed further at the rear of the exhibit hall, choked off by narrower aisles to pass through in this area. Large crowds also jammed the panel rooms in the floor above. A staging area was required for fans wishing to attend DC’s New 52 panel, and the room was filled to capacity, with attendees standing in the back and along the sides of the room.

Notable in the above panel, was Vibe writer Sterling Gates noting Batman’s guest appearance in Vibe #4, stating that “Batman is not who you think he is” in that issue. Editor-in-Chief  Bob Harras also noted that Scott Snyder and Jim Lee’s upcoming Superman Unchained will feature a four-page gatefold by Lee. He also noted that Jonah Hex’s character will end up in present day Gotham in All-Star Western #22. 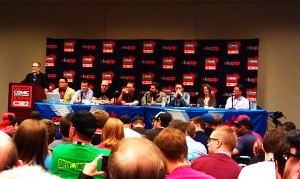 Marvel also staged an Age of Ultron panel that discussed the latest Marvel event. During an aside in the panel, Communications director Arune Singh asked the crowd whether or not they liked Peter Parker’s “absence” in Superior Spider-Man, and whether they wanted Parker to return. Reaction was mixed, but when one fan asked if Marvel was seriously considering not bringing Parker back, Singh replied “Dead is dead in comics, sir!” Also, another fan asked the panel about the status of Peter David and his recent stroke, and Executive Editor Tom Brevoort answered that David was doing fine, and in fact put in an appearance at the Marvel offices last week. Brevoort also mentioned that David had recorded a video for playback during the convention, at Marvel’s X-Men panel on Sunday.

The convention program states that the show will be back next year, on April 25 – 27, 2014, in McCormick Place’s south building, making it the first time the con will be held in that particular building and will mean that the con has occupied all four building in the complex since its inception in 2010.