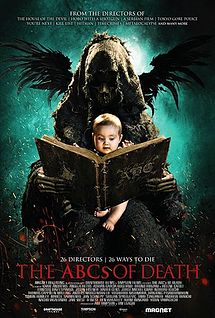 The ABCs of Death is not OK. I typically dig anthology horror films, but this one is liked a rigged carnival game. You spend a crap ton of time on it and walk away with a small prize that you didn’t really want. To be fair though, just like a rigged carnival game I kind of knew what to expect going into it.

The ABCs of Death is made up of 26 segments by 26 different directors. Each director was assigned a letter of the alphabet and pretty much given free rein to come up with a story involving death based on a word they chose that started with the letter they were given. Trust me, it sounds a lot cooler than it turned out.

I was not a fan of this movie. Of the 26 segments, I thought N and Q were legitimately good (Q being the best by far), and 2 or 3 others were decent. That’s 5 out of 26 that I would watch again. In all honesty, it took me quite some time to even remember what N was about even after looking up the word that was used. That’s because all of the other letters were so bad that they temporarily purged N from my memory banks.

If I had to review this movie in 5 words or less, it would be: What the @#$%, Japan!? There were I believe 4 Japanese directors and each one of their segments was totally off the wall. L even caused 2 of the 3 people watching it (me being one of the 2) to audibly say, “I’m not OK with this”.

Sure, there were some laughs shared and genuinely creepy moments sprinkled conservatively throughout the film, but this was not a good movie. I saw it once, won’t see it again and won’t recommend that anyone else see it. That’s pretty much all I have to say about this one.