Howdy and welcome to Black Friday!  Not that Black Friday has anything to do with this week’s RETRO REVIEW, but it just seems appropriate that the comic book I’m reviewing this week is a “black” or “dark” character and it’s also Black Friday!  And that character?  It’s The Spectre, from D C C0mics  and the comic book is The Spectre # 5, cover dated August 1968.  It’s got a great cover drawn by one of my favorite artists; Neal Adams, featuring the Spectre towering over fleeing people, running in apparent fear of him, with a cover title of “Fugitive From Justice”! 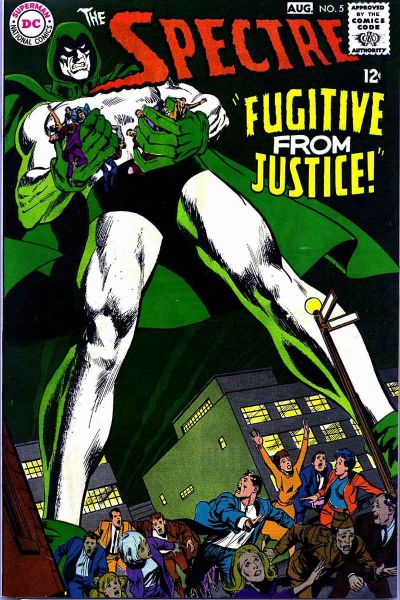 The story inside does not retain that title, but uses; “The Spectre Means Death?”  It is written, pencilled and inked by cover artist, Neal Adams and is twenty-three (23) pages of slightly confusing story and beautiful artwork!  The book begins with a prologue, following a masked man scaling a snow-covered mountain in Northern India.  In a mountain top temple he discovers a source of power, a glowing globe, which he steals.  The globe shows him a man, a drifter, who takes a bullet out of a gun, and then the bullet is absorbed into the man’s hand!

This ends the prologue and we move to chapter one, where we see a giant running rampant in a department store!  The police are summoned to the store where Jim Corrigan and the Spectre take action.  But upon the Spectre’s appearance all of the shoppers run in terror at the sight of the Spectre!  He is forced to save them from trampling each other and the giant escapes.  The Spectre tracks him outside the mall and they battle.  Again gathering crowds react in terror to the Spectre’s presence!  Again the Spectre must halt his battle with the giant to save the bystanders.

This time  shifts a group of citizens to another “time-cycle” so they are not crushed by a falling tower.  When he returns them to the proper time three of the people are missing!  The Spectre then has to track them through time.  The first he finds in Colonial America, about to be ridden down by attacking Indians on horseback!  Needless to say, he saves him, returning him back to his proper place in time.  He then seeks and finds the other two people at the very dawn of history!  The Spectre saves them and returns them also to their proper place in time.

But when he does so, a Tyrannosaurus Rex tags along for the ride.  The Spectre fights and defeats the Tyrannosaurus Rex, but once again the people that he has saved react in terror at the sight of him, saying; “It’s Death, come to get us!”  It’s at this point that the story cuts back to the man in the prologue, who has been observing all that’s been going on.  Jim Corrigan finds the Spectre hiding in an alley, so that he doesn’t set off another panic in the streets.  When the Spectre attempts to rejoin Jim to rest and charge his powers, he is prevented from doing so and Corrigan attempts to arrest the Spectre!  Bet you didn’t see that coming!

The Spectre flies off, once more tracking the enraged giant.  He finds him and once again they engage.  Spectre defeats the giant but is overcome and powerless at the outcome.  It’s at that moment that the masked man from the prologue is revealed as the Psycho Pirate, who had been defeated by Doctor Fate and imprisoned in a magic mask so that he was powerless, back in Showcase # 56.  The now shrunken giant awakens and reveals that he is the man who originally shot and killed Jim Corrigan twenty years ago!  Wow, talk about tying up lose ends!  It’s now up to Jim Corrigan to fight, and with the unwitting help of Gat Benson, the man who killed him, defeat the Psycho Pirate!

A pretty cool story, with, as I said earlier, wonderful Adams artwork!  Plus Adams ties it into the Golden Age origin of the Spectre, as well as, Showcase # 56, from June of 1965.  The story also references Showcase # 60, cover dated February 1966, a Spectre story.  So all in all a pretty special issue!  Adams only drew four issues of the Spectre, issues two (2) through five (5), all worth owing, but he also only wrote two issues, numbers four (4) and five (5)!  I highly recommend that you check them out! 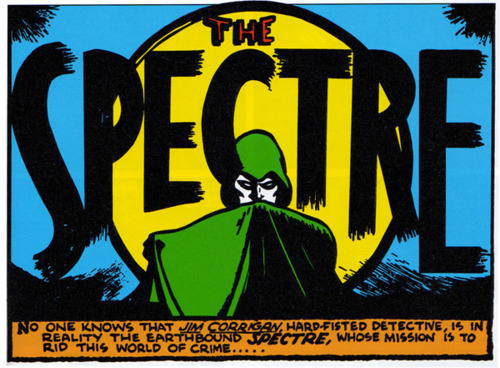 Now go make yourself a turkey sandwich with that leftover bird from yesterday!  And if you’ve got enough energy left, how about leaving a comment, so I know you’re out there!