Hola amigos!  It’s time for another RETRO REVIEW!  And this week I’ve dug into the D C Comics section of my man cave, and pulled out Teen Titans # 20, cover dated April 1969!  It’s got a nice moody cover pencilled and inked by Nick Cardy.  And here it is for your viewing pleasure: 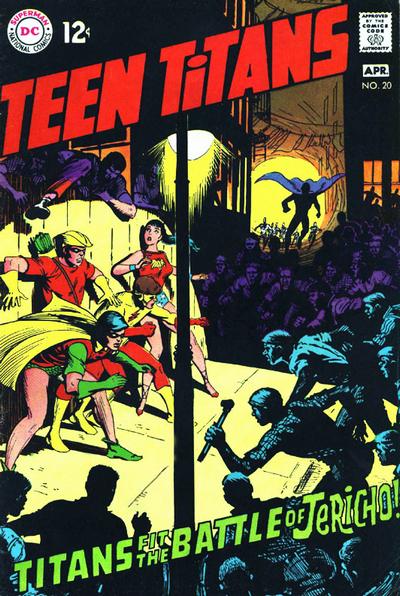 The story this issue begins a three issue arc that is both written and pencilled by Neal Adams!  The inks are provided by cover artist, Nick Cardy.  The story is entitled; “Titans Fit The Battle Of Jericho” and it begins with a mysterious figure breaking into the Teen Titans headquarters.  He leaves a mysterious box, but in so doing so, sets off an alarm that the Titans respond by racing to the site of the alarm.

As the Titans rush off, the mysterious figure is revealed to be Joshua, who appears in the meeting room that the Titans have just left!  It turns out that the box was simply a Jack in the Box and nothing dangerous.  The Titans hear something and race back into the meeting room, where Joshua is waiting for them.  Speedy attempts to grab Joshua and receives a shock.  As he staggers away, Kid Flash rushes in and meets the same fate!

And before Wonder Girl can strike, Joshua electrifies her bracelets!  Before Robin leaps into battle, Joshua explains that he needs their help!  He’s been trying to keep a group of nice kids out of trouble, but they’ve fallen in with a bunch of ex-cons and now won’t listen to him or take his advice.

The Titans aren’t sure why they should help this group if kids until Joshua tells them that the ex-cons have supplied the kids with guns.  With that simply explanation, the Teen Titans agree to help!  Joshua rushes out and the Titans follow.  They arrive at the location of the kids, who seem happy to see the Titans!  Thus ends part one.

Part two begins on page seven, where we see Joshua listening in on a broadcast about a secret operation named; Jericho!  Joshua doesn’t know who, what, where or when Jericho is.  The scene switches back to the Teen Titans and the kids they’ve come to help.  It turns out their guns are actually just water pistols, as Robin finds out by taking a shot to the face!

The Titans and the teens tussle and the kids miss the rally they were suppose to attend.  They report to a guy known as; Fat Cat. He reports to s shadowy figure in Europe, who declares; “the Teen Titans must die!”  The Titans are ambushed shortly there after and Joshua comes to their rescue, and together they take out Fat Cat!

They discover a bomb plot and the Teen Titans and Joshua rush to clear the area, but one of the “bad guys” manages to press the button, but rather than a bomb it sets off a glowing and growing gelatin mass and within a monstrous figure that is growing and growing!  But suddenly, as it attempts to leave it’s gelatinous tower it stops and collapses in pain and is destroyed.  It seems that the siren that Joshua rigged to warn the people caused the creature to die without any other explanation.  The story then ends with three panels showing green aliens from another dimension, as well as, the shadowy figure in Europe.  The aliens had appeared earlier in Teen Titans # 16, and are now back vowing vengeance against the Teen Titans!  And the man over in Europe also vows to crush the Teen Titans, as well.

Note, as far as I know, this issue was the only time that the hero, Joshua, was ever used.  He turns out to be the older brother of one of the kids who were about to get into trouble, as is revealed in the story.  But I do not think he’s even been used again within the DC universe!

As many of you already know, I’m a big Neal Adams fan, but I also really appreciate Nick Cardy’s artwork, but together, I’m just not so sure!  I think on paper, it should be a great combination, but somehow I do not like the results.  Cardy alone is great!  Adams alone is great!  But together, each of their individual styles are lost and the results are just not up to either alone!  That’s a shame, really!

Please come back next week for a new Fabulous Find and be back in two weeks for another new RETRO REVIEW!  Til then, stay safe and enjoy a comic book or two!