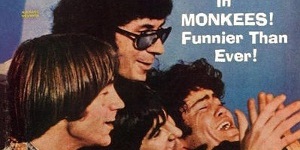 Welcome back for a new RETRO REVIEW.  This week it’s time to look at a comic, from someone other than Marvel or DC Comics, so I’ve dug out a nice little gem from Dell Comics, it’s cover dated May 1968 and it’s … The Monkees # 11.  It features a nice photo cover of the band,  which was made up of (from left to right); Peter Tork, Michael Nesmith, David Jones and Mickey Dolenz.  Here’s the cover: 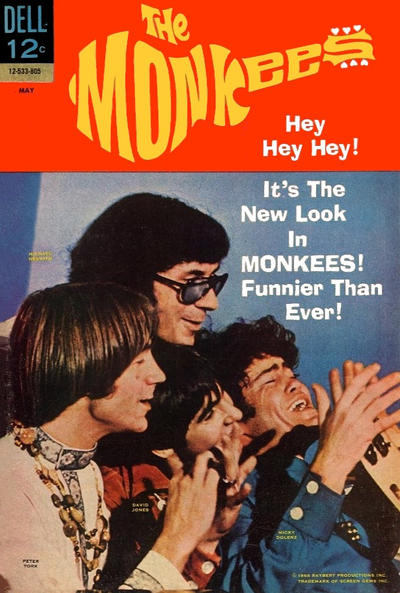 Dell Comics published The Monkees comic for seventeen issues, from March 1967 through October 1969.  Though the seventeenth issue was a reprint of the first issue, even to using the same cover as was used on issue number one.

Issue number eleven (#11) has three separate stories, which was pretty typical of their comic book series.  I have been unable to fine out the writer of the comics, but the art, both pencils and inks, were supplied by Jose Delbo.

This issues stories were; “The Good Olde Days”, where the Monkees get struck over their heads by a falling Drink Coca-Cola sign, and dream that they are in the past.  And like in their television show, Davy falls instantly in love with an inventors daughter.  They decide to play detectives to find the men who have stolen the inventor’s clock, which just happens to be a time machine, as well.

They eventually track down the thieves and change into their “Super Monkees” identities to recover the clock/time machine.  They then utilize the invention to return from the past, as they all wake in the hospital with identical bumps on their heads.

The second story is entitled; “Monster Combo” and had the Monkees hiking to a “haunted house” on a hill where they are to play at the Monster Rally.  Of course, they are met by the butler who looks like Frankenstein.  They are brought to the lab, where a typical mad scientist rules over body shrouded tables.  Needless to say, the Monkees fear the worse, but eventually find that the bodies are robots.

The last story is entitled; “The Great Disc-O-Chase”.  In this story we find that the Monkees have made a demo record in a sidewalk recording booth.  (Hey, I and a couple of my friends made one of these at Ceder Point years ago).  Of course, the record rolls away from them as it’s spit from the booth.  The Monkees then spend the rest of the story chasing the rolling record.  Down the street, through a sewer, and finally in a pie delivery truck.

The record eventually finds itself in the hands of a couple of record people who want to use the record in a pie commercial.  Of course they are only offered to be paid in pies, not money, so the Monkees turn down the offer abd walk into the sunset with their theme song; Hey, Hey, We’re the Monkees playing.

None of the stories are earth shaking, but all are fun in their own way and nicely drawn by Jose Delbo,  Not essential to your collection, but if you’re a child of the sixties and have a fond spot for the Monkees you ought to pick up a couple of these, at least in my opinion!

That’s all, folks, see ya again next week for a new Fabulous Find and be back in two weeks for another RETRO REVIEW.