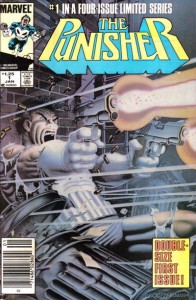 And here is the cover to the Punisher’s first appearance in Spider-Man, from 1974, it’s drawn by Gil Kane, with inks by John Romita Senior, though the story inside was written by Gerry Conway and drawn by Ross Andru, with the inks provided by Frank Giacoia and Dave Hunt: 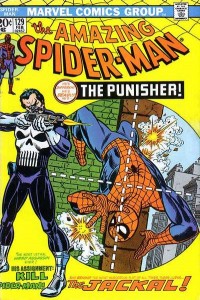 There is one interesting oddball thing about this mini-series!  It was advertised as a four issue limited series, but, in fact, Marvel writer, Steven Grant and artists Mike Zeck and John Beatty couldn’t finish their story in just four issues, so there was actually five issues instead of four in this mini-series!  Issue four said # 4 in a four issue limited series and the very next month # 5 appeared, saying # 5 in a five issue limited series!  I find that pretty darn funny!  I mean, really, the writer, Grant and the editor, Carl Potts, couldn’t figure out the story was running long before they reached the end of issue four?  In their defense, I have heard that it was planned as a five issue mini-series all along, but that someone made the mistake on the first issue listing it as only four issues.  But if that was true, why didn’t they correct it on the second issue?

But now to the fist issue itself.  First off the title of the story is: “Circle Of Blood!” and the art is absolutely beautiful!  Mike Zeck and John Beatty really give it their all, at least in my opinion!  The story takes place in Ryker’s Prison, out on Ryker’s Island, and begins on day forty-five of Frank Castle’s imprisonment!  Castle has just returned to Ryker’s after being drugged and almost dying.  Grant gives us a quick recap of Castle’s military background in the Marines and reminds the reader that his family was gunned down by a mob hitman!  With that simple information, we, the readers, have all the knowledge that we need to progress into the story.

The whole story takes place within the prison and involves Castle dealing with his former foe, Jigsaw, and a mob boss by the name of Carlo Cervello, aka, The Brain, who is also imprisoned on Ryker’s Island.  Throughout the story Castle has to fight a large number of his fellow prisoners, but after taking down Jigsaw, he agrees to join Cervello in a planned prison break.

The night of the break arrives and another prisoner, by the name of Gregaio, at the direction of Cervello, attempts to murder Castle, with a guard’s pistol and a prison made silencer!  Castle survives the attack and decides to stop Cervello and the other escapees!  A number of guards are killed by the escaping prisoners, but Castle manages to save a couple of them and the prison break is stopped.  Castle personally stops Cervello and Jigsaw and before he is sent back to his cell, the warden makes him an offer he can’t refuse!

He is given the chance to work for a group of people known collectively as The Trust, his mission to wipe out organized crime!  Frank agrees to work for The Trust and is given his uniform back, and he dons it finally on page thirty-eight of a forty page story.  Besides the cover, it’s the only time he is seen in his “fighting togs”.  As you can tell by the page count, this first issue was actually a double-sized first issue, so the mini-series could be said to have been six issues, if you would like to count it that way!

Not a bad little first story and it sets up The Punisher’s story-line for the rest of the mini-series!  All in all, a pretty good opening solo story for a character that was originally introduced as a foe for Spider-Man, who prior to this had only appeared as a foe, or as a guest star in other Marvel comic books.  I give this issue four (4) out of five (5) flaming 45s!