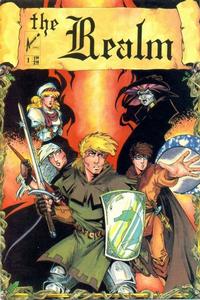 What’s that?  You’ve never heard of The Realm?  Or Arrow Comics?  Well, I guess its good that its back to school time!  And consider this your first lesson in Local Comics History 101!

Arrow Comics was founded in 1985 by Ralph Griffith and Stuart Kerr and was the publisher of black and white comics.  They were located in Ypsilanti, MI and originally they published a fanzine by the title of Fantastic Fanzine.  Then they discovered the first issue of Teenage Mutant Ninja Turtles and decided to gather some friends and other local comic creators and start publishing.  And that’s exactly what they did, until unfortunately, they ended up caught up in the black and white bust/implosion and they were gone by 1989, with The Realm being  moved over to Caliber Comics!

Okay, thus ends your local comic history lesson.  And now its on to to The Realm # 1.  It was published in March 1986 and its first run lasted twelve  (12) issues, or until March 1988.  A thirteenth  (13) issue was published by WeeBee Comics and was cover dated June 1988, before the run continued published by Caliber Comics with issues fourteen (14) through twenty-one (21).

But this first issue from Arrow Comics sported a cover pencilled by newcomer, and local Detroit guy (pun intended), Guy Davis.  The cover inks were supplied by Sandy Schreiber.  The story is entitled; Time Slip and is plotted by Ralph Griffith with a script by Stu Kerr.  Interior artwork was done by Jim Miller, who provided layouts and with finished pencils by Guy Davis and inks by Tim Dzon.

The story begins at a Bloomfield Hills mansion, where Sandra Beach lives with her parents.  She is being joined on a road trip by University of Michigan college friends, Alex Stonewell, Marjorie “Marge” Duncan and Dominic “Dom”Wagner.  They are driving to the U.P. to stay at a cottage/cabin that Alex has recently inherited from an uncle, during their spring break.  The friends make the trip and for a couple of pages we get a flashback, setting up the relationships between the four friends.  Dom and Sandra are an item, though Dom is not sure what the rich girl sees in himself, the football star, but is happy to live in the moment.  Alex is the shy one and he’s attracted to Marge and she seems to reciprocate, but they are not yet anything more than friends!

They spend the first night uneventfully and the boys slip off to do some fishing the next morning, before the girls wake up.  At the water’s edge Dom trips over a chest buried in the weeds and ends up drenched in the lake.  He pulls Alex in with him when he tries to help him up.  This is a very normal thing that I could easily relate to based on my own relationship with friends!   Then both boys celebrate the finding of a “treasure chest”!  Dom lugs it back to the cabin, where they find the girls up and about.  The chest has a padlock on it and Dom grabs an axe and “brings the full force of his powerful arms to bear” on the lock/chest.  And that’s where the titular “time slip” happens,bringing them all darkness!

They all wake to find themselves in another place and possibly another time.  Their car is gone, and the cottage is now an abandoned hut.  Then the four are immediately set upon by three armored horsemen.  The boys are unable to stand up to the masked men and are quickly knocked out and the girls are captured by the riders.  The guys awaken to find the girls gone and that they are being confronted by a hooded archer.  Of course, it turns out the bowman is really a bow woman, or actually a female elf, by the name of Serene Silverfawn!

She agrees to help the boys rescue the girls and she provides them, and use the comic book reader, a bit of background on the Province of Drohm, which is on the continent of Azoth.  She also provided her own background/past when she was sold in slavery and eventually escaped and that she is sure that this same fate is what the missing girls will be facing!

The three companions make the two day trek to the City of Drakhol, the slave capitol of  Drohm.  They arrive in time to witness Sandra being sold to the Lord Darkoth for one thousand gold pieces.  And thus ends the introductory issue of The Realm!  A pretty good first issue all in all.  Guy Davis’ art is pretty well done, but far from being polished.  The comic is black and white, with the only color being on the covers.  The story is interesting and you can tell that its based on the game dungeons and dragons to some extent.  But it’s nicely set up and the first issue makes you want to pick up the second issues, so it succeeds in that manner.

I give it three (3) out of five (5) Legion Flight Rings.  If you only like your comics in color, you can subtract one Legion Flight Ring, but I don’t hold that against it personally, thus my rating!  And the series is basically by Detroit guys, so its well worth searching out back issues to add to your collection.  I suspect you’ll be able to find them cheap, if you can indeed find them!

Til next week, this is Greg Turner signing off.