Welcome back to another RETRO REVIEW and happy Friday!  This week I’ve dug out The Trouble With Girls # 1.  It’s from Malibu Comics and is cover dated August 1987.  The comic is black and white with a cover cover drawn by Tim Hamilton.  The story is entitled; “Meeting Girls” and it is created and written by Will Jacobs and Gerald Jones.  Artwork is provided by the above mentioned Tim Hamilton, with inks by Dave Garcia.  And if you care about things like this, the logo was designed by Jim Chadwick the creator of Concrete!

Before I jump into a recap of this first issue, I thought you might like to see the cover, from the summer of 1987, a cool twenty-five years ago! Here it is: 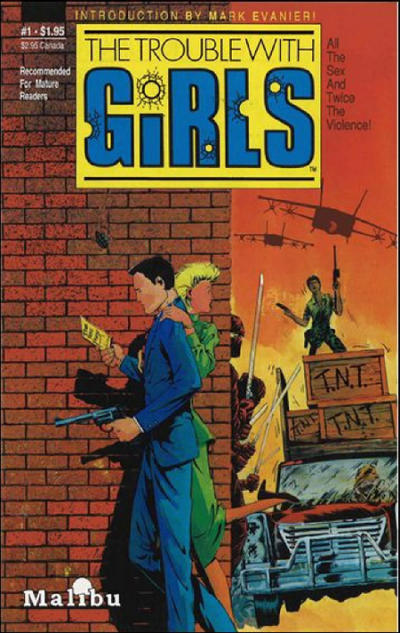 The Trouble With Girls # 1

I’m not sure what I was expecting when I picked up this comic twenty-five years ago, but I wasn’t expecting the splash page to be of the hero of the book to be sitting on the toilet, with his pants around his ankles, reading John Steinbeck‘s The Red Pony!  But seconds later, as I turned the page, a truck full of explosives is driven into Lester Girls home and explodes!  Now that’s starting a book with a bang, eh?

Girls survives, but loses his book in the burning building.  He rushes out,grabs a cab, then cuts through the park, the Hyatt Regency in Chinatown and into another cab, which takes him to his penthouse on Russian Hill.  He enters, giving his pursuers the slip, but finds a curvaceous redhead waiting for him there.  She comes on to him, but he leaves her to continue reading a new copy of The Red Pony.  Eventually, distracted from reading by an attack by foreign espionage agents, he returns to the redhead in the other room.

It’s at this moment when the comic shifts it’s focus across the globe to China for three pages, where we find a man in bed with two women!  Hey, I never said this was a comic for the kids, did I?  We don’t find out exactly who this character is, but he’s got some mad fighting skills, and he’s got a certain way with the ladies! All we know is that he went to China for the final ingredient for his five-spice chicken recipe and he’s having to fight off the Red Army!  Then it’s back to Girls, who is dealing with the redhead’s attempt to seduce him.

Then once again the writers switch gears for three pages and introduce a couple of reporters, who want to true story about Lester Girls.  Then it’s back to Girls and the redhead, who, while in the midst of lovemaking manages to satisfy the girl and shoot and kill three attacking ninja (well actually, they are chefs, the Sashimi Blade, members of the ancient order of Sushi chefs!)  And why are they after Girls?  Well, who isn’t after Girls!

It appears that the man we met in the earlier scene in China, is Apache Dick, Girls’ blood brother!  Now as Girls tries to let the redhead down easy, explaining that he can’t “just settle for luscious, glamorous, vivacious, super-mammarian (is that even a real word?) Hollywood sex goddesses”, the foreign espionage agents let loose with mortars, destroying Girls’ penthouse and killing the redhead (sorry but we never did learn her name).

As the comic ends, we see Les Girls grabbing a rocket pack and flying off into the night.  Wow, that’s quite a beginning to a new comic book series!  And it certainly lived up to the blurb on the cover proclaiming; “All the sex and twice the violence!”  I don’t know about you, but I was hooked!  A really great opening story and decent, though not great, art!  The original series ran fourteen issues and then returned later for a couple of more runs from Malibu and other companies.  Marvel Comics even published a four issue mini-series in 1993.  This is tongue in cheek fun, think Austin Powers, though that came later!  It’s worth the look if you can pick up cheap copies!

Till next time, this is Greg Turner, at Back To The Past Pop Culture TV.