As Comic-Con International San Diego, as it’s officially known, or SDCC, as it’s known to Twitter sitters, concludes, it’s clear that the con is unwilling to let something as absolute as physical space deter or stunt its growth. On the contrary, a trip outside any of the exits of the cavernous San Diego Convention Center shows that whatever the official confines of the center cannot hold, the city that lies outside of it stands ready and all too able to accommodate everything else. 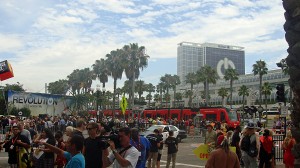 NBC Revolution ads dominated the landscape on the east end of the convention center.

As it has the past few years, the area in front of the convention center adjacent to the city’s trolley tracks that run along Harbor Drive provided a zone for opportunists ranging from small software companies pushing their latest pop-culture related smart phone apps to television networks promoting current and upcoming TV series. A large exhibit advertising this fall’s new NBC show Revolution was prominent in this location, and the nearby Hilton Bayside hotel also boldly promoted the series with a large banner affixed to the building’s front face. This newer hotel east of the convention center also served as an annex for Comic-Con programming with several events hosted in its large Indigo Ballroom. 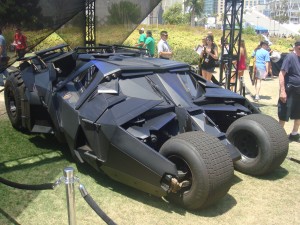 The Tumbler from Batman, The Dark Knight, in a rare daytime sighting.

The adjoining Marriott Marina hotel to the west of the convention center continued its tradition of housing the con’s hospitality suite for attendees as well serving as a pickup location for fans lucky enough to score exclusive convention purchases.  The eastern face of the Marriott was also draped in a gigantic ad, this time for SyFy’s Defiance. And for the first time, the open real estate between the Hilton and the convention center was put to use by hosting an exhibit for Warner Bros, which included a stage featuring appearances by various WB celebrities, as well as a display of past and present versions of the Batmobile, ranging from the original Adam West incarnation up through different versions of the Tumbler to be featured in the upcoming The Dark Knight Rises film. 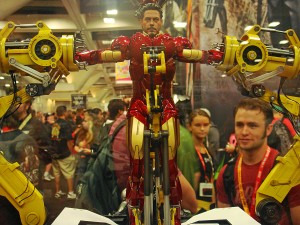 Sideshow Collectibles Statue from the Iron Man and Avengers movies.

Nonetheless, the heart of the con was logically within the walls of the building where it resided. But it can be focused down no further than the 500,000 square feet of the exhibit hall, because the array of art, video games, celebrities, toys, movie and TV studios, and yes, comics, was as always a diverse assortment that drew its estimated 150,000 attendees to all corners within once they arrived. One particular mainstay exhibitor located near the center of these offerings was statue and bust manufacturer Sideshow Collectibles, whose assortment of statues bearing the likenesses of movie and comic book characters tempted just about every movie and comic fan who passed by, and strained the budgets of many of them when they succumbed to making a purchase. 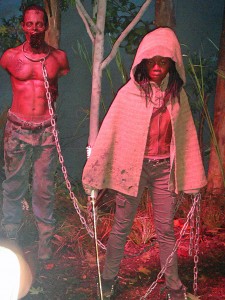 Other exhibitors drew plenty of attention, as well. As it has the past two years, AMC’s The Walking Dead had a full size recreation of a scene from the series, this time featuring upcoming new character Michonne, complete with her leashed zombie pets. Fans flocked to the Warner Bros display to check out the new Superman costume from the pending Man of Steel film, and did the same to the Total Recall display featuring the futuristic vehicle from that upcoming movie. And Artists’ Alley was well populated with veteran comic artists such as Trevor Von Eeden and Herb Trimpe, as well as newer creators such as Mouse Guard’s David Petersen. And Marvel Comics’ own booth had a large display promoting next year’s Iron Man 3, featuring seven different full size mockups of Iron Man’s armor. On Saturday, Robert Downey Jr. himself put in a brief appearance at the booth and chatted with several dozen youngsters, all decked out in their own homemade Iron Man costumes. 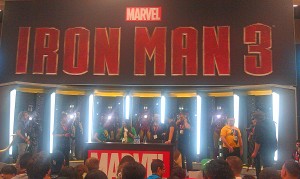 But most of the celebrity sightings take place elsewhere in the convention center, namely in the program rooms. Downey not only appeared at the Iron Man 3 panel but presided over the first screening of footage from the film, along with Marvel President Kevin Feige. Feige also confirmed rumors that there would be Guardians of the Galaxy film, and director Edgar Wright also appeared on the panel officially announcing the oft-rumored and already-maligned Ant-Man film. 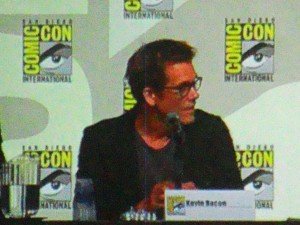 Kevin Bacon appears after a screening of The Following.

While making no new announcements, Man of Steel director Zach Snyder and star Henry Cavill both appeared at the Warner Bros panel.  Sylvester Stallone and Arnold Schwarzenegger appeared together on a panel promoting Expendables 2. Director Peter Jackson showed extensive footage from the upcoming The Hobbit films. And on a smaller scale, and screen, actor Kevin Bacon and other cast members from this fall’s The Following appeared after a screening of the show’s premiere episode. 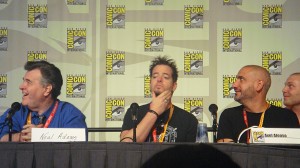 Among the comic-related announcements, Marvel announced that New Mutants would be ending with issue #50 in October, and that Red She-Hulk would be taking over the Red Hulk title, also in October. Deadpool writer Daniel Way also announced that he would soon be leaving the title. In one of DC’s panels, some comedy ensued as co-publisher Dan DiDio jokingly asked fans if any DC readers from before the New 52 relaunch were still reading the company’s titles. When met with applause, DiDio responded, “Good, I thought you were mad at me.” To which marketing head Bob Wayne added, “Oh, they are.”

And, Shi creator Billy Tucci handed out posters of his character to attendees who visited his booth. The poster had no other information other than the words “A Patrick Tatopoulous film” at the bottom. Tucci offered no further details. 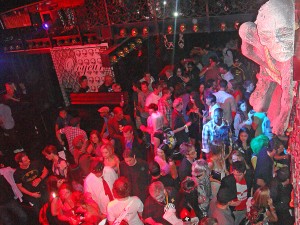 Friday’s FEARnet Con of the Dead party, where zombies and survivors rub elbows.

Of course, the above happenings were only a tiny percentage of the goings-on within Comic-Con and have undoubtedly already been covered more extensively elsewhere. But just as there was plenty happening both inside and outside the convention center, so too was there after the convention center closed its doors each day. And as darkness approached, Comic-Con’s nightlife awakened, and a long day of convention going could be punctuated by countless nighttime events that lie ready to placate those still looking for more fun even after the day the day was over. 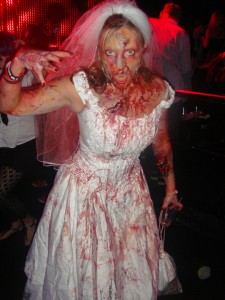 Among the most coveted events was a pair of invitation-only parties on Friday night that kicked off the actual weekend. Roddenberry.com hosted its party at a nightclub in the heart of the Gaslamp District, while a couple of blocks away FEARnet sponsored the Con of the Dead, a zombie themed bash that kicked off at the conclusion of this year’s Zombie Walk: San Diego. The zombie walk has been an annual event at Comic-Con for the past few years, and 300 lucky zombies were able to win passes to the exclusive event in addition to a similarly large number of others who knew their horror trivia or just happened to be in the right place at the right time when passes were given away. 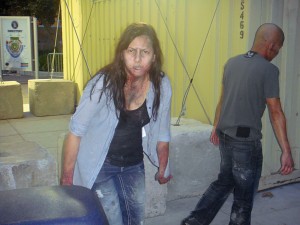 But the zombie madness didn’t end there; another highly-anticipated event was The Walking Dead Escape: San Diego, a mock-zombie apocalypse put on by The Walking Dead creator Robert Kirkman’s publishing company that was staged at the nearby Petco Park, normally home to the San Diego Padres. Three levels of tickets were available; those fortunate enough to ante up and purchase Walker tickets early enough were paying for the privilege of being made up as walkers from AMC’s The Walking Dead Series, by the same special effects company that provides the makeup for the actors on the show. Others could participate by being Survivors, and navigating an obstacle course set up within the ballpark’s concourse while evading the aforementioned walkers. And those not brave enough to do either could buy a ticket as a Spectator. The event was spoken of highly around Comic-Con by those who attended, and enviously by those who did not. 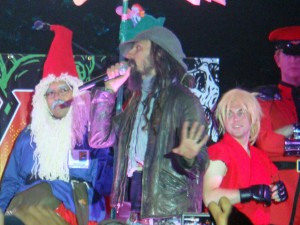 Rob Zombie hosts a costume contest during Dawn of the Con at Petco Park.

As if Petco Park didn’t have enough zombies, VH1 Classic’s Dawn of the Con Party was held on Thursday night as a separate event within PetCo’s Park at the Park beyond the ballpark’s outfield seats. And the event showcased an appearance by none other than friend-of-all-things-horror Rob Zombie, who presided over a pseudo-costume contest and premiered a trailer of his upcoming film, Lords of Salem. Custom made tee-shirts could be bought on-site, and underground-style posters commemorating the event were given away. 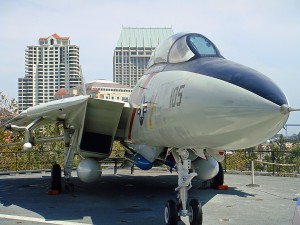 An F-14 Tomcat fighter jet on the deck of the USS Midway.

So there was no shortage of things to do at Comic-Con 2012. For all of the complaints that Comic-Con is too big, too hectic, and too overwhelming, there were plenty who didn’t forget that outside of Comic-Con’s reach; yes, there were parts of San Diego that it didn’t touch, though not many; revelers could take a break and hit the beach on Coronado Island or Ocean Beach. Or visit the nearby Midway Museum. Or nearby historic Old Town. Or closer-still and always beautiful Balboa Park, or that kind of world famous zoo that resides within it.

A trip to Comic-Con will yield something for everybody, and it if doesn’t, check your pulse; you yourself might be a zombie.