I WILL TELL YOU #47: Snickers or Spider-Man?

Have any of you ever had a momentary brain burp and thought that buying multiple copies of, say, Marvel’s Siege: Homefront would be a wise investment? Or that DC’s current relaunch of O.M.A.C. would be the next hot thing? Or that you just had to keep buying Spawn from Image Comics because, well, you’ve always bought Spawn? How many of us have countless comic books in our collections that seemed like a good idea to buy for one reason or another at the time, but now sit in a box gathering dust and taking up space, never to be looked at again? How many of us bought a comic that we read but hated? Or liked, but really don’t see a reason to keep? Or perhaps never even got around to reading at all, and probably never will? 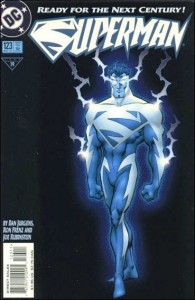 Just what were we all thinking when we actually bought this?

We all have a stack of comics like these in the backs of our closets somewhere; comics we don’t want, yet we hold on to them, even though we know they’ll be worthless for the next fifty years. Why? I will tell you: because not only are we readers, we’re collectors, and the idea of throwing away a comic book with this morning’s coffee grounds just seems, well, unthinkable.

Actually, it doesn’t just seem unthinkable; it is unthinkable. Not because that unwanted, slightly tattered issue of Star Brand #5 is part of the same species as our precious Uncanny X-Men #94 or Showcase #4; it’s because that every comic that goes in the garbage is one comic that will never be experienced by anyone else. It’s like throwing away that old jacket instead of donating it to Salvation Army.

We could try and sell these comics. Emphasis on “try.” Anyone ever try dumping a run of Thunderstrike or The Fly on the counter of a comic shop or used book store and ask how much they could get for it? The store owner’s laughter is still reverberating throughout the cosmos from the last time I tried that. Of course, there’s eBay, but most forgotten and fossilized comics out there won’t even make back the listing fee.

So. We can’t bring ourselves to chuck ‘em. We can’t sell ‘em. It’d be tough to even give these comics away.

Actually, no; it wouldn’t. 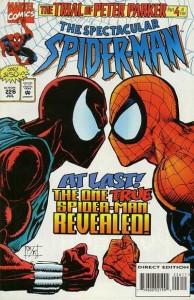 We might not have thought much of the Clone Saga, but the kids who ended up with these sure did.

In a couple of weeks, most of us will be encountering dozen of kids knocking on our front doors as they go trick-or-treating on Halloween night. They’ll say the magic words, and we’ll drop a piece of candy or two into their bags. Or, we could try to do something a little different this time, and drop in a comic book instead. Hey, it makes sense to me. Over here are a bunch of kids we don’t know begging for us to give them stuff, and over there is a stack of comic books that we’re itching to get rid of. Connect the Dots. Or Smarties. Or Sweet-Tarts.

For the past ten years, I have given every kid who’s come trick-or-treating the choice between candy or a comic book. Licorice or Legion?  Whoppers or Wonder Woman? Snickers or Spider-Man? Faced with a readily-to-be-pruned collection that was outgrowing its space and a mountain of review comics from various publishers, and with an ongoing awareness that today’s kids weren’t being exposed to comic books, I’ve opted to get rid of unwanted comics while promoting the medium at the same time.

And with roughly half of the kids opting for a comic, I would have to say that this has been a successful and worthwhile idea. I’ve become the cool house in the neighborhood on Halloween night, I’ve cleared out a lot of comics that I couldn’t have otherwise, and it’s left more candy for me to eat.

Not all of the kids show interest, of course. Some of the very young ones are in it solely for the sweets, and that’s fine. But among the ones who do show interest, most of them show decisive interest. Some have never seen a comic book before, and experience the same sense of wonder that we all did when we first experienced them. Some are repeat customers, whose joyful exclamations of “this is the comic book house” can be heard from up the street as they approach. Some have even asked where they could find more comic books. Besides my house, that is. 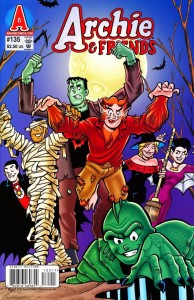 The experience of turning youngsters onto comics is one of the most gratifying experiences I’ve ever had. Everyone likes to think that kids can only be entertained by videogames and social media, but it’s just not so; kids still do like comics, but sadly most will never be exposed to them.

So how about it, gang? Got any age-appropriate comics you’re looking to unload? Now’s your chance. There’s no reason not to. You’ll clear out some space, you’ll surprise a few youngsters, you’ll feel good about yourself, and you just might bring some much-needed new readership into our hobby. And, if you’ve already bought your Halloween candy, then you’ll have that much more left for yourself.

Trust me. You’ll be the cool house in your neighborhood. You’ll be buying some insurance against your windows keeping soaped next year. And you’ll be doing a service to the industry that has provided you so much enjoyment. The industry needs new readers, and most importantly, it needs young new readers. And many of us are in a position to help.

Because the idea of our hobby further retreating from the mainstream due to declining readership isn’t just a shame. It’s scary.