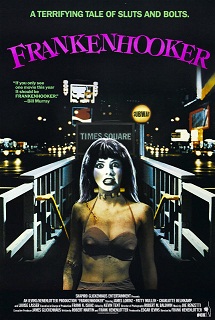 A lot of big things happened in 1990. Mr. Bean debuted on television, Nelson Mandela was released from prison, the Ultimate Warrior defeated Hulk Hogan for the WWF Heavyweight Championship at Wrestlemania VI, Germany reunified, Rangers F.C. won their 2nd consecutive league title in their historic “9 in a Row” run and Frankenhooker was released.

Frankenhooker is every bit as awesome as it sounds and the best part is that it’s intentionally bizarre, over the top and funny. A lot of the movies I watch are completely ridiculous and “good bad”. This movie in my opinion is legitimately good. Frankenhooker is a black comedy/horror film that was written by Robert Martin and Frank Henenlotter and directed by Henenlotter. It’s about an aspiring mad scientist named Jeffrey Franken (played by James Lorinz) that loses his fiancée, Elizabeth Shelley (played by Patty Mullen) in a bizarre lawnmower accident and is determined to bring her back to life. Between that brief synopsis and the title, you should be sold on this movie already.

I recently watched this movie twice and I like it more every time I see it. It’s just so off color, funny and creative. James Lorinz and Patty Mullen both do an amazing job in this movie. Both of them are hysterical and deliver in different ways. Lorinz is more of a snappy, subtle type of funny while Mullen embraces the over the top and goofy aspect of comedy. The story doesn’t drag at any point and it actually moves quicker than expected. The first time I saw Frankenhooker there was one element of the movie I didn’t like, and it actually hurt my opinion of it. From the second viewing on I’ve come to realize that I was being way too critical and I wasn’t just enjoying the movie for what it was. It’s quickly becoming one of my favorite movies.

This movie is campy, funny and creative. It even has a brief cameo by the legendary Zacherley! It’s one of those rare films that had the balls to try something ambitious and it absolutely nailed it. It’s definitely one to watch long after the kids have been put to sleep for the night, but the important part is that you see it at least once.

Frankenhooker (R) is available on blu-ray or through a Netflix DVD subscription.