So, over the past few weeks, I’ve been showing Marvel plenty of love, by gushing over not only what’s happening with Spider-Man, but also in their five best titles. And then, I kind of saw DC sitting over there, looking all jealous-like, so I also danced with them and their top five. Of course, everyone knows how these things go; once you start showering attention on some of the kids, you have to acknowledge them all.

So, that’s what I’m going to do. There are plenty of other comics out there deserving of attention that don’t have continuity reboots or creative shuffles to draw it. Therefore, after kissing the popular girls, I’m going to give a little smooch to:

The Top 5 Comics That Aren’t By Marvel or DC 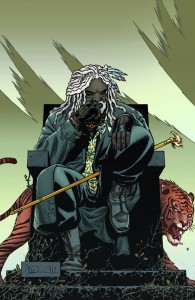 5. The Walking Dead (Kirkman / Adlard, Image Comics)
OK, The Walking Dead is pretty popular, so let’s get this obvious one out of the way. For over 100 issues, writer Robert Kirkman has been doing what so many others have done before, and since: telling his take on the zombie apocalypse. But unlike most others, it’s not all about shooting zombies in the head and making sure you don’t get bit. While there’s plenty of that, it’s really about the living, not the dead, and the dangerous landscape is really nothing more than a backdrop. And unlike any others who have tried to tell a story like this, successfully or otherwise, Kirkman’s been able to build on his success, developing the central characters in a format that a comic mini-series or two-hour movie won’t allow. Able to move his story along, keep it exciting, and knowing when to throw a shock our way just when it might seem that things are getting stagnant, Kirkman knows exactly how to turn what many have long thought to be a limited premise into an ongoing one. It remains so entertaining that it’s easy to forget that it’s already been around for nearly a decade. 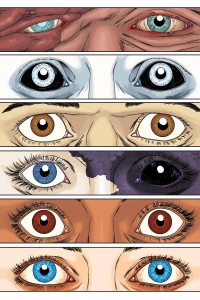 4. Nowhere Men (Stephenson / Bellegarde, Image Comics)
Another Image comic? OK, let’s get the obvious publisher out of the way. After over twenty years of of making comics, a lot of people might not realize just how diverse Image Comics’ line has become. And Nowhere Men is the best example of that; no superheroes, bouncy babes, or zombies here. Instead, writer Eric Stephenson tells the story of a different kind of Fab Four; these guys aren’t musicians, but scientists that have gained celebrity-like status because of their revolutionary inventions. But while one could argue as to whether music can change the world, it’s pretty clear that something that came from the minds of this group has changed it, sometime in the future, and not for the better. Stephenson relies on jumping between past, current, and future events to keep the origin of this disaster a mystery, but does it a lot better than most writers. And artist Nate Bellegarde carries it well with some nice layouts. Please listen; you don’t know what you’re missing. 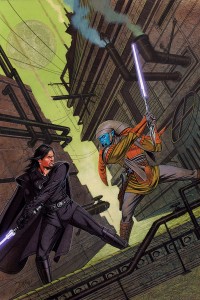 Star Wars Dawn of the Jedi – The Prisoner of Bogan #4

3. Star Wars: Dawn of the Jedi (Ostrander / Duursema, Dark Horse Comics)
Dark Horse has been publishing Star Wars comics for over two decades, and most of it has been with little fanfare. Writer John Ostrander and artist Jan Duursema have probably been not only the most prolific during that time, but also have consistently told some of the best stories. and, both have been given the unique privilege of chronologically bookending the Star Wars expanded universe; their excellent Star Wars: Legacy told the story of Luke Skywalker’s descendant over a century in the future, and now this series goes, um, back to the past; way in the past; like, millennia. And he makes the dawn of the Jedi a fascinating time; it was a time long before hyperspace travel, before lightsabers, and before the precursors to the Jedi even fully understood The Force. Even in unexplored territory, Ostrander treats the franchise with reverence, staying true to the concept without straying. He’s a veteran who understands exactly what should or shouldn’t be done, and Duursema is no less a veteran herself, whose clean and beautiful art only seems to get better over time. Since it appears that the Star Wars license will soon move back to Marvel, fans should check out the current Dawn of the Jedi mini-series, The Prisoner of Bogan, as it’s uncertain as to whether these creators will move with the franchise to its new home. 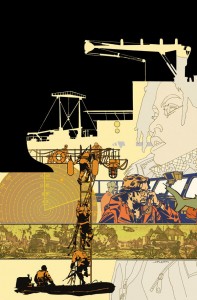 2. The Massive (Wood / Brown, Dark Horse Comics)
There have been plenty of stories about how the world could end; nuclear holocaust, alien invasions, zombie infestations, etc. But writer Brian Wood knows how it’s going to really end; not with a singular event, but with a series of smaller ones that might not seem too apocalypse-worthy individually, but eventually add up. In Wood’s world, it’s death by a thousand cuts, and many of them have already happened. Changing weather patterns flood major coastal towns; government insurrections have a worldwide domino effect, and basic supplies become all but impossible to get ahold. And one day, Wood’s characters realize that the world they knew not all that long ago is already gone. In Wood’s story, The Kapital is a scientific ship roaming the seas looking for its lost sister ship, The Massive. And in its travels, its crew comes across a very dangerous world full of pirates, opportunists, and thieves. And that’s a far scarier thing, because it’s a scenario that’s far more plausible than a zombie apocalypse and one that Wood makes all the more convincing. It’s disturbing and compelling at the same time, and hard not to read with a bit of uneasiness. 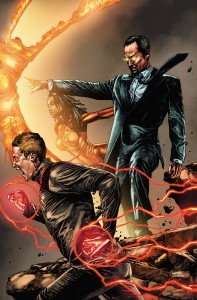 1. Harbinger (Dysart / Evans, Valiant Comics)
You did know Valiant was back, right? Well, you do now. And Harbinger led the way and remains the best of the lot. And it’s an incredibly faithful re-imagining by writer Joshua Dysart; there’s still Peter Stanchek and his mind-controlling powers, and Toyo Harada as the evil corporate leader who hides powers of his own. And other familiar characters are currently being reintroduced. Where this comic excels is in Dysart’s perfect pacing; he takes his time and doesn’t rush things just because we’ve seen incarnations of these characters before, and doesn’t slow things down with a write-for-the-trade mentality. He balances action, drama, and surprise. And, he is without a doubt the best at knowing how to write teenagers, a task most writers struggle with. And artist Khari Evans adds a cinematic quality to big explosions and quiet moments alike. Overall, it’s a superb example of comic art that’s strongly written and drawn, and one that’s not afraid to take a pre-existing concept and try to make it better, all while remaining true to it. Dysart and Evans do exactly that, and yeah; as fondly remembered as the original Harbinger series was, this one is even better.

That’s my Top 5, but I will tell you, it was a shame to leave out so many other wonderful comics off this list. Like Paul Jenkins’ new Deathmatch from BOOM! Studios. Or Planet of the Apes: Cataclysm, also from BOOM. Or the slew of graphic novels from even smaller publishers. But as usual, I throw it back to you: what are some of your favorites; don’t be bashful; discuss!