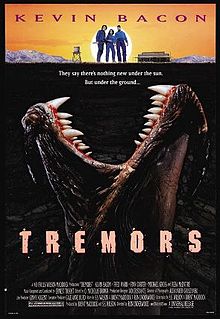 AUTHOR’S NOTE: I would like to start this edition of Spook Show Cinema by letting you all know that it was very hard not to play “6 Degrees of Kevin Bacon” with every actor I mention (I would exclude Tremors, of course).

Tremors is a science fiction/horror/comedy film from 1990 that stars Kevin Bacon, Fred Ward, Michael Gross and even Reba frickin’ McEntire. It’s about a couple of handymen from a very small town in the middle of nowhere named Perfection. They have big dreams of getting out of Perfection and living the American Dream. They’re on their way out but their journey is cut short when mysterious subterranean creatures nicknamed “Graboids” start to attack the area surrounding Perfection. It’s up to the handymen, a seismologist and the townspeople of Perfection to survive and destroy the creatures.

As a kid I relentlessly rented Tremors 2: Aftershocks from my local video store, but I had never seen the original. After a brief talk with my personal advisor and friend, Anni, I made Tremors my weekend viewing project. That was a damn good decision because this movie is bad ass. This movie has it all. It’s funny, action packed, creative and original. The creature design was awesome and the characters were fantastic. I had an absolute blast watching this movie. The character of Burt Gummer is an absolute riot. He and his wife are stockpiling supplies, weapons and food due to what they believe is the impending third world war. Naturally, only cinema gold comes from this character. The beautiful part is most of the characters carry their weight in one way or another.

The main thing I like about Tremors is the creatures, a.k.a. the Graboids. It’s such a cool concept that was very fresh at the time. It’s like the Graboids are desert versions of “Bruce” from Jaws. You know the Graboids are under there somewhere and it’s creepy as hell. They have a huge advantage over the humans, but they aren’t unbeatable. It is a huge victory for Tremors that they establish that, too. There’s nothing worse than watching a movie with a big bad guy or creature that is seemingly unbeatable, and then the smallest thing kills them.

Tremors is an awesome movie that every fan of campy horror needs to see. It’s very well written, it looks great and the creatures are original. If you haven’t seen it, do so.