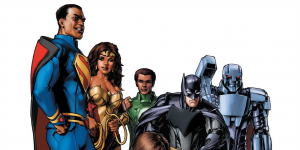 Welcome back to Strange Times & Places, where we’re not looking at a specific story but a world of DC’s sprawling Multiverse – Earth 23, home of President Superman!

This would be, like most worlds of the Multiverse, a Royale With Cheese – differences pile up until you have a DC Universe that’s at once recognizable and unique. In this case, do you remember back when Barack Obama made a joke about being sent to Earth from the planet Krypton back in 2008? Well, Grant Morrison remembered it when writing Final Crisis #7 and introduced President Calvin Ellis AKA Kalel of Krypton AKA the Superman of Earth 23!

Rocketing from the island of Vathlo on the doomed planet Krypton, the baby Kalel landed on Earth and was adopted by the kindly Ellis family. Named Calvin Ellis, he fights for justice both in the superpowered guise of Superman and as the President of the United States!