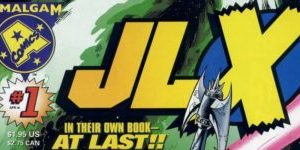 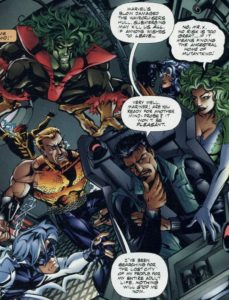 Welcome back to Strange Times & Places, where the familiar meets the unfamiliar. There are few occasions that will be truer than today, when we look at the post Marvel vs. DC soup known as the Amalgam Universe! Specifically, we’re reading JLX #1 and JLX Unleashed #1. 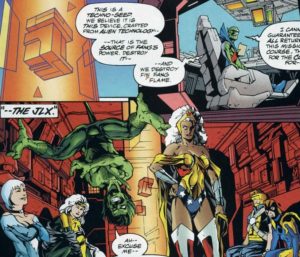 In JLX #1, the metamutant members of Judgment League Avengers have banded together and gone outlaw as the Justice League X-Men! They’ve broken Mariner, the metamutant King of Atlantis, out of prison in order to track down his lost city – birthplace of metamutant kind. They’ll have to contend with their former teammates and an army of murderous sentinels to fulfill their quest – do these young heroes have what it takes to succeed?

In JLX Unleashed #1, the Hellfire League of Injustice has summoned the unstoppable Fing Fang Flame to purge Earth of Metamutants! Unfortunately, he’s more interested in exterminating humanity in general. Her team all but defeated, the Judgement Leaguer known as Amazon takes a drastic measure – breaking the JLX out of prison to fight the beast. Will the metamutants succeed where Earth’s Mightiest Heroes have failed? And is a world that legalizes the sentinels even worth saving? 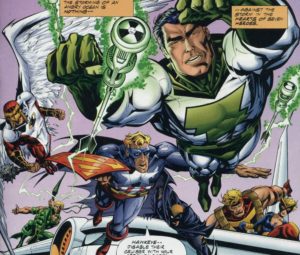 It’s hard to pinpoint specific differenaces, but the first one-shot deserves kudos for reviving Martian Manhunter’s obscure secret identity as mysterious Marco Xavier for the first one-shot. Having the telepathic Marco “Mr. X” Xavier, mysterious benefactor of the JLX, turn out to be The Skrullian Manhunter was a perfect twist for a series blending the X-Men with the Justice League Detroit and the Justice League Task Force 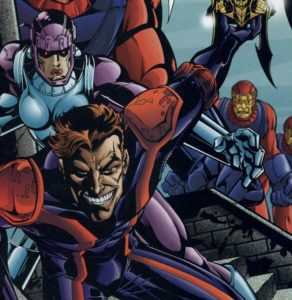 Will Magnus, Creator of the Sentinels/Brother of Magneto

Not specific to these issues per se, but the Amalgam Universe is somewhat muddled by not being a straight one-to-one mixture of characters and concepts. Take for example the Judgement Leaguers Hawkeye and Goliath, who appear in the opening of JLX #1. They are both mergers of Green Arrows, Conner Hawke and Oliver Queen respectively, with Marvel’s Hawkeye. Conner gets his name and keeps their mutual “super archer” shtick while Ollie inherits his time as Goliath and retains their relationship with a female teammate (Canary, a merger of Black Canary and Mockingbird).

And I might be the only person bothered by that, but I want my alternate continuity to follow its own rules, dagnabit!

NEXT WEEK: Tokusatsu Gesundheit will watch The Mysterians! No, not the Bay City-based rock band – the movie they named themselves for!

APPENDIX: Who’s Merged With Who