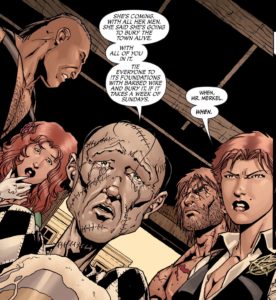 Welcome back to Strange Times & Places, where we’re talking about one of the stranger issues to ever cross my desk – Secret Six #24.

It’s an imaginary story setting the Secret Six, spiritual successor to the Suicide Squad, in the old west. It was sandwiched between a one-off story by Suicide Squad maestro John Ostrander and an issue that whittled down the team’s membership (which had ballooned to something like twelve). This run of one-off stories came just after a really gruesome arc…but the Elseworlds tale in #24 is still a left fielder. 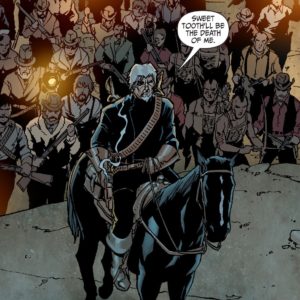 Bounty hunter Floyd “Deadshot” Lawton rides into a small town on precisely the wrong day: the robber baron known as “Junior” is set to ride into town with her army of mercenaries and burn it to the ground. Sheriff Scandal Savage, her deputy Bane, and girlfriend Knockout aim to stand in her way alongside local brothel proprietor Jeanette, Wildman fur trapper Cat-Man and street performer Ragdoll. Just once, can these deviants and outlaws be heroes or will it all end in fire? 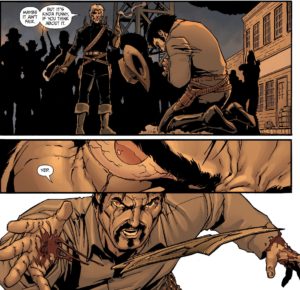 Twenty-two pages of story doesn’t leave a whole lot of time to set up new circumstances, so characters are mostly transposed whole from the main DCU, less any superhuman abilities. Where this story really excels is in foreshadowing, as The Secret Six’s final stand at the end of series ends little better than the one in this issue – they may have a sense of decency and honor, but they’re still the bad guys.