“I’m out of it for a little while and everbody gets delusions of grandeur.”

Welcome back to Strange Times & Places, where we’re celebrating the release of the surprisingly good Solo: A Star Wars Story with a Han-centric alternate take on the original trilogy, Star Wars Infinities – The Empire Strikes Back.

Like the previous installment, this one is a For Want of a Nail story. On the planet Hoth, Han Solo’s tauntaun dies before he can find Luke Skywalker out in the snow. The time that this costs him costs Luke his life, and sets Han on a very different path.

Han misinterprets Luke’s dying words as instructions for Han, a man who didn’t believe in the force until very recently, should go to Dagobah and train as a Jedi. Evacuating the besieged Rebel base on Hoth alongside Leia, Chewbacca, and the droids, Han makes his way to Master Yoda’s home…only to find that Leia’s the more suitable apprentice. Han & Chewie set off to square things with Jabba The Hutt while Leia trains to be a Jedi, and the seeds of a greater conflict are sown… 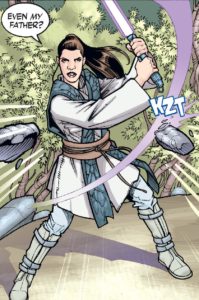 Come Back Next Week for Your Regularly Scheduled Tokusatsu Gesundheit!