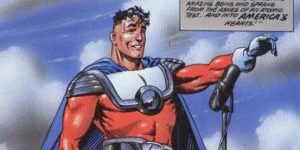 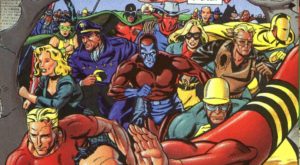 Welcome back to Strange Times & Places, where we’ll be taking two weeks to examine two DC Comics stories that tackle similar themes with similar characters while being very different tales. First up is 1993’s The Golden Age!

Hmmm….I’d say Royale With Cheese, though honestly it barely counts as an Elseworlds tale. Though there are a few major departures from established canon, it honestly wouldn’t have been out of place as a retcon-laden in-continuity tale.

Taking place from 1947 to 1950, this four issue mini-series chronicles the fall of the Golden Age superheroes into the distrust and paranoia of the 1950s. Tex Thompson, AKA Mr. America AKA The Americommando, has returned from World War II a hero for ha 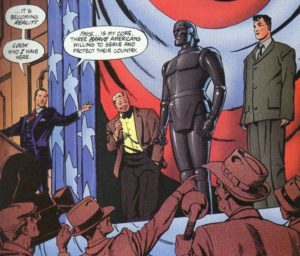 ving killed Hitler! As other masked mystery men fade into anonymous retirement, Thompson uses his hero status to begin a career in politics, crusading against the Red Menace and assembles a team of true patriots to protect America…but all is not as it seems.