The History of Dogs Playing Poker 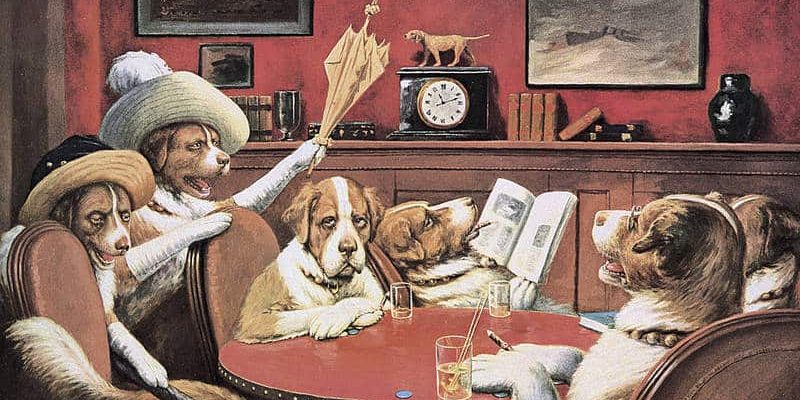 Welcome back to Consigned, Cool, & Collected! Every Monday, Back to the Past stops to dote on a particular piece we’re selling. This could mean going into its individual history, the history of where it comes from, its place in pop culture, or even how we came to posses it. This week’s entry is not about our pitch for a sixth Air Bud movie (Chair Bud: Sixes Wild) but about what inspired it: a hand-painted reproduction of the famous painting “A Friend In Need”! 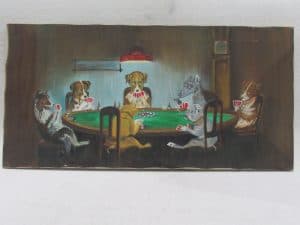 The original dogs playing poker painting, entitled simply “Poker Game”, as painted by artist Cassius Coolidge in 1894. Koolidge, who often signed his work as Kash Koolidge, was a great contributor to what would later be labelled “kitsch” art. His greatest innovation was the “Comic Foreground”. Kash would paint a comedic caricature scene  on a large canvas that would end at the neck of the figure involved. By standing behind the figure, a person’s head ended up on the cartoon’s shoulders and they were in the scene. Kash held the patent on this particular artistic method, though the better known photo stand-ins had already been in use for some time by then.

That said, Kash’s patent on one method and marketing of both saw him credited as the inventor of the whole concept! We gather that this was a great source of income for Koolidge, as scenes like these are ubiquitous at tourist attractions to this day. This let him pursue his other artistic muse: slightly anthropomorphized animals doing human things. This includes the original “Poker Game” piece as well as “Kelly Pool”, featuring dogs playing that game. But the best thing is, he managed to get paid to create these paintings. 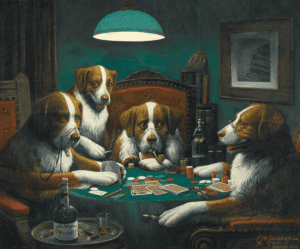 Brown & Bigelow is a marketing company that specializes in the creation of branded items like calendars and apparel. They’re still around today, but way back in 1903 they commissioned Kash Koolidge to create more paintings of dogs doing human stuff for use on calendars. This partnership lasted until 1910 and resulted in sixteen paintings. About half of them featured dogs playing poker, with the rest depicting everything from Masonic initiations to courtroom testimony.

The most famous of these paintings, the one most people picture when they hear “dogs playing poker”, is the 1903 creating known as “A Friend in Need”. It features a bulldog passing his friend the ace of clubs under the table in the foreground, where only the viewer of the painting can see it. It, or more accurately a parody thereof, is the painting that drives Homer Simpsons mad in Treehouse of Horror IV. 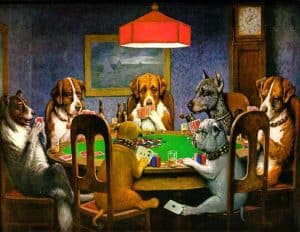 Like a great many “tacky” elements of the early 20th century, the dogs playing poker series was rediscovered by baby boomers. Alternately mocked and appreciated, the paintings became a shorthand for low class art. Prints and reproductions hung in the Conner home on Roseanne, in the bar on Cheers, and as an embarrassing old purchase hidden in the garage on Boy Meets World. Cartoons like Courage The Cowardly Dog, Family Guy, and Looney Tunes: Back In Action recreate the more famous paintings with their characters as a standalone punchline. Long after their painter died, these works became instantly recognizable pieces of pop culture.

Despite famously being a short hand for low class art tastes, the Cassius Coolidge originals are highly valued pieces these days. The original “Poker Game” painting sold at auction for $658,000 back in 2015, and other works in the series have sold for $200,000+ a piece. As we said, ours is a reproduction that was hand painted with oil on canvas. While not a Coolidge piece, it has decidedly more kitsch panache than a simple print.

This is the kind of stuff that got us into this business: art created for cheap giveaway calendars that have become iconic pieces of Americana. If you have a collection of stuff in this vein that you’re ready to part with, we’re always ready to bring it to market for you. And until you’re ready sell, we’ll be sharing out love for the stuff we handle right here, every Monday.