“The hammer of the gods will drive our ships to new lands;
To fight The Hulk, singing and crying: Valhalla, I am coming!”
The Immigrant Song, from Led Zeppelin’s Led Zeppelin III, © 1970. Lyrics by Robert Plant, misinterpreted by Jim Johnson

Clearly, the ancient Norse had more respect for Thor thousands of years ago than Americans have had in the last half century. 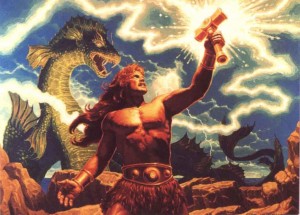 The Norse Version of Thor, God of Thunder, Healing, and Fertility, and Protector of Mankind.

The hammer-wielding deity known as Thor, or Þórr as it was spelled by the Norse, commanded the thunder and lightning and was revered as the protector of mankind. And this was essentially the basis for the Thor that we all know, as comic book fans; the version created by Stan Lee and Jack Kirby back in 1962. But Þórr, the deity, was also known for his metallic gauntlets, which he used to wield his hammer, Mjölnir, as well as a belt he donned which gave him additional strength. He rode around the heavens in a chariot pulled by his two goats, Tanngrisni and Tanngnost. And he wasn’t known only as the God of Thunder; he was also the God of Healing, as well as the God of Fertility.

Thor, the superhero, however, was not quite as grandiose. In Marvel mythology, mighty but brash Thor was banished to Earth, or Midgard, by his father Odin to learn the ways of humility, and part of this sentence was to live part of his life as a crippled mortal that we all know as Donald Blake, a slight and reserved physician who had to walk with a cane. Definitely cruel punishment for an able-bodied god who used to tool around Asgard in a chariot. 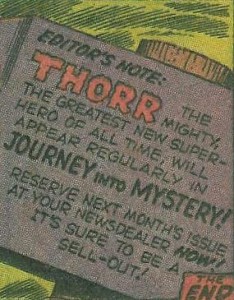 Thorr, as spelled on his own hammer.

That Odin; what a guy. Talk about tough love. As if banishing his only son from the heavens to live as a shy and crippled mortal wasn’t enough, he had to go and spell Thor’s name wrong on his enchanted hammer, when he finally reappeared.

While the notion of Odin banishing Thor to Earth, or Midgard, isn’t really associated with the commonly held Norse legend, one has to wonder if maybe Stan was on to something. Did he come up with the idea himself, or did he perhaps unearth, or unmidgard, a lost tome or scroll somewhere that spoke of Thor facing a life of humility here on the mortal plane? After all, in the early 1960s, comic books were still widely seen as a children’s medium; what worse kind of humiliation could a Norse deity face than being relegated to the status a comic book character? And one who would face the terrifying Stone Men of Saturn on his first adventure, no less?

Actually, there were a few more humiliating incarnations. We’ve all tried to forget them, and some of us probably have, but they were there, nonetheless. What kind of humiliations do I speak of you ask, and where did they occur?

I will tell thee. 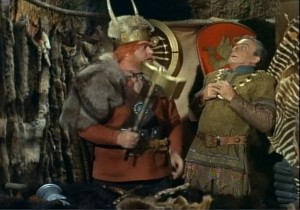 One notorious example that comes to mind was only five years after Thor was introduced in the comics. In 1967, television viewers were first forced to endure an absolutely wretched episode of a show that’s nonetheless fondly recalled nowadays, for the most part, at least by comic book and pop culture fans. That show was Irwin Allen’s Lost in Space, and the episode in question was entitled Space Vikings. Yep, Space Vikings, so you can probably see where this is going. In that episode, the always bumbling Dr Smith inadvertently conjures up the gauntlets and hammer of none other than, that’s right; Thor himself. And eventually, Thor himself shows up confronting Dr Smith, looking for his lost weapons. That is, this guy who looks like a cross between a member of Bachman Turner Overdrive, a caveman, and some drunk guy tailgating at a Minnesota Vikings game is calling himself Thor. Talk about humiliating.

A personal side note: I absolutely loved Lost in Space as a kid, and still do for the most part, but I absolutely hated that episode. That was the first time I ever heard of anyone named Thor, and when I found out about the legend of the Norse gods, this episode made me embarrassed to admit that I had Scandinavian heritage. 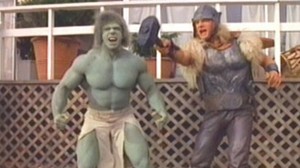 The Incredible (?) Hulk and the Mighty (??) Thor. Just what were they doing here, anyway?

As horrible and ridiculous as this episode was, something eventually came along that was actually worse. And comic fans probably do remember this one: it was a made-for-TV movie in 1988 called The Incredible Hulk Returns, the first of three absolutely terrible TV movies that aired years after the cancellation of the weekly series. And this particular one featured a version of Thor that was loosely based on Marvel’s version of the character. And when I say loosely, I mean barely recognizable. When the character first appeared onscreen, I wasn’t sure if that was supposed to be Thor or the bouncer who tossed me out of a GWAR concert once. I’ve seen better costumes at comic conventions. Hell, I’ve seen better costumes on the clearance rack at Toys R Us. Figures that this piece of lawn sausage had to be the first live action encounter between Thor and The Hulk. 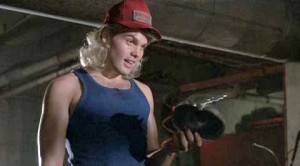 And, let’s not forget that almost-appearance of Thor that we got on the big screen back in 1986, in a very fun movie called Adventures in Babysitting starring Elizabeth Shue. In this film, the little girl Shue’s character babysits for is a big fan of Thor, to the extent that she wears a winged hat not unlike Thor’s during most of the film. And during these babysitting adventures, the child encounters a tall, chiseled auto mechanic with long blond hair who she believes is actually Thor. Except, with this guy’s clean-shaven looks and curly locks, he looked more like a life size Mego Thor action figure. Now that’s humiliatin’.

Thor’s sentence seems to over now, though; at long last, the character has gotten a deserving live action treatment. At long last, he be worthy.

Makes me wonder what Þórr did that was so bad; did he do donuts in the clouds in that chariot of his? Whatever he did up in Asgard millennia ago, it must have cheesed ol’ Odin off pretty good for him to condemn his son to the above kinds of humiliation. And he’s the favored son.

Makes me feel really bad for Loki all of a sudden.