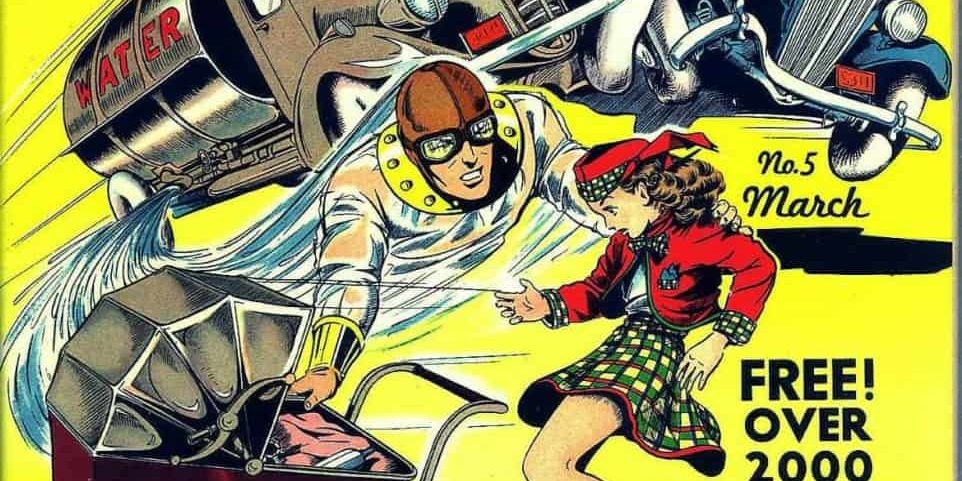 Welcome back to My Hero! Each week, Back to the Past uses this column to tell you why the obscure characters from our custom action figure collection are great! Years ago, we purchased the life’s work of an artist and comic fan whose chosen medium was granting forgotten comic characters the action figure immortality denied to them by major toymakers. We’re still sorting through it all, and we’re making new finds every week! This week’s find, who will soon be available on ebay, is Hydroman! No, not the Spider-Man villain with outsized importance in the Fox Kids cartoon, the Golden Age superhero. 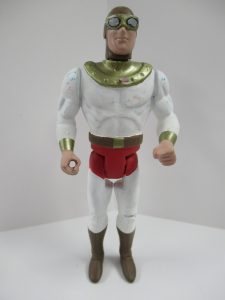 Hydroman as he appears in our custom action figure collection!

The Benefits of Acid Baths

Bob “Hydroman” Blake has what is easily one of the most unsettling superhero origins of all time, right up there with Plastic Man getting acid in open wounds. His friend and fellow chemical engineer Harry Thurston was working in his lab one day when an unknown chemical concoction converted his whole hand into a solid puddle of water. Calling Bob to the lab for assistance, a hapless assistant trips while bringing over the rest of the flesh-to-water concoction. Bob Blake is utterly doused in it, transformed immediately into a sentient puddle.

Luckily, his pal has the antidote to this poorly understood chemical laying around and quickly cures him. They then decide to experiment with injecting the chemical directly into the bloodstream, which just seems wildly irresponsible. This allows Bob (Harry, despite suggesting the experiment, is conspicuously not its subject…) to control the transformation into water. Donning a pair of tights, an aviator’s helmet and goggles, and an old gunbelt, the heroic Hydroman was born! 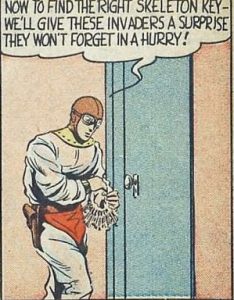 Hydroman’s first adventure saw him battle Imperial Japanese saboteurs. He nearly gets shot in solid form, so his girlfriend works with Harry to make him a bulletproof suit. It’s made a of clear polymer that ends up making him look not unlike he’s wearing a one of those vacuum-pack bags. As the featured continued, that look was de-emphasized and altered to look like a white bodysuit. Interestingly, the internal art would drop the aviator helmet after issue four but the cover never would. It made it’s return when creator Bill Everett left the strip after issue twelve, hence he was wearing it when he met Rainbow Boy in issue fifteen.

Bill Everett had already created Namor The Sub-Mariner for Marvel AND Amazing Man for Centaur Comics by the time he worked on Hydroman. He would go on to co-create Daredevil with Stan Lee in the 60s. Amazing Man, notably, would go on to be the inspiration for Marvel’s Iron Fist, DC’s Amazing-Man, and his own revival as one of Malibu Comics’ Protectors. What we’re getting at here is that many of Everett’s characters had significant influence over the years.

Hydroman is not one of them. He pretty much disappeared in the 40s and didn’t reappear until Project: Superpowers #4 in 2008, winning a mention on the cover of the next issue. Like most all heroes from Project: Superpowers, anyone who wants a physical memento of them needs to hit up our Custom Action Figure collection. And if you’ve got collection like our custom figures, be it more customs, original art, garage kits, convention sketches, whatever – and are looking to sell it, get in touch!