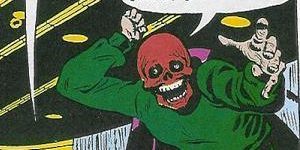 Welcome back to My Hero, where I tell you the story behind the weird and wonderful characters in our Custom Action Figure Collection. Today, we’re looking at a Marvel villain who only exists thanks to retcons, a version of the Red Skull whose main enemies are an outright fascist in a Captain America suit and Spider-Man. That’s right, it’s the Communist Red Skull!

Captain America has been one of Marvel’s top superheroes ever since his debut back in 1941, which means that his original Golden Age series persisted until superheroes fell out of fashion in 1950 AND he was included in Atlas Comics’ abortive efforts to revive superhero comics in 1953-54. Those mid 1950s adventures changed Cap’s focus from Axis Spies to Soviet Agents (the book’s tagline was even “Captain America…Commie Smasher!”) . His arch-enemy, The Red Skull, had his allegiances changed to reflect this.

All of Cap’s post-war adventures were written out of continuity when Stan Lee and Captain America co-creator Jack Kirby revived the character in the pages of 1964’s Avengers #4. Neither was particularly enamored with Captain America’s 1946-1954 portrayal, so his Silver Age history included the now iconic multi-decade dip in arctic ice in the final days of the War in Europe.

That state of affairs lasted until 1972, when young writer and bleeding-heart liberal Steve Englehart reintroduced the very right wing 1950s Cap and his adventures to continuity. Now, the Captain America, Bucky, and Red Skull of that era were all imposters placed in the recognizable costumed identities by their respective governments. Retroactively given the secret identity “Albert Malik”, the sinister soviet spymaster would pop-up here and there to hassle the likes of Hawkeye and Spider-Man (more on that later) in the modern day before unceremoniously being killed off by agents of the “real” Red Skull in Captain America #347.

I would have first encountered this Red Skull when reading up on Spider-Man lore in the mid-90s. The recent fake-out resurrection of Richard and Mary Parker had thrust Spidey’s super-spy parents back into the spotlight, making their lethal final investigation of the Red Skull’s spy ring from 1968’s Spider-Man Annual #5 back to prominence. You see, when Stan Lee wrote that story he probably intended it star the Nazi version of the Skull…but the timeline on that didn’t even work then! Johann Schmidt would have been in suspended animation when Peter Parker was a kid, and he didn’t exactly have a government to spy for after 1945.

Luckily, there was another version of the Red Skull bopping around during the original’s long sleep AND he was already a spymaster. So, retroactively, Spider-Man Annual #6 became the Communist Skull’s 1st modern appearance AND he gained a brand new major accomplishment – killing Spider-Man’s parents. Albert Malik will never match the toyetic notoriety of his predecessor, but he has an unassailable spot in Spider-Lore and a spot in my heart as My …errr, My Villain.