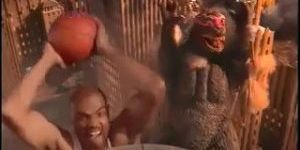 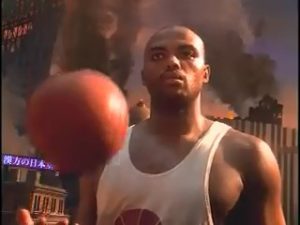 The most fearsome Kaiju that Godzilla ever faced.

Welcome to Tokusatsu Gesundheit, where this week we’re talking about a TV commercial and the comic book it inspired, the most ridiculous piece of Godzilla media to date, Godzilla Vs. Barkley!

Well, Godzilla plays a game of basketball against Charles Barkley. The comic adds a framing plot about a little kid with a magic silver dollar and Charles Barkley being Earth’s greatest warrior, but that’s just an excuse plot for a B-Ball game between Sir Charles and the King of Monsters.

Advertising agency Wieden & Kennedy had what may in fact be the most batcrap insane idea for a Nike ad ever devised. The ad was intended for Japanese audiences and would see basketball superstar Charles Barkley face off against Godzilla in the streets of Tokyo. Why is Charles the size of a Kaiju? Why does Godzilla know how to play basketball? Who cares? The commercial was produced in association with Industrial Light & Magic, quite possibly the most respected special effects company in the film industry, and the results were so good that Nike approved it for U.S. release. It first aired during the MTV Video Music Awards on September 9, 1992. 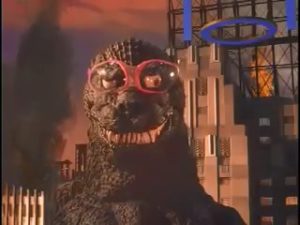 About a year later, Dark Horse Comics (the kings of licensed comics at the time) released a one-shot based on the commercial. Writer Mike Barron (creator of Badger and Nexus) teamed with artists Jeff Butler and Keith Aiken and just leaned right into ridiculousness.

While not ascending to the Silver Screen heights that Michael Jordan’s commercials with Bugs Bunny did, the commercial and comic are a fun entry into Godzilla’s lore. Can we can get a Sir Charles cameo in the Warner Bros. Monsterverse, please?