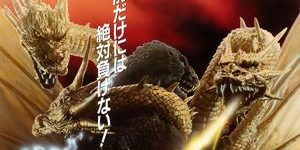 Welcome to Tokusatsu Gesundheit, where today we’re continuing our trek through the films of the Heisei Godzilla series by watching 1991’s Godzilla vs. King Ghidorah.

A UFO arrives in Japan arrying a crew of time-travelers from the year 2204. They warn that industrialization and the rise of nuclear power is fated to bring Godzila back to destroy the country in the future, and the Futurians are here to stop it. Recruiting a team of Godzilla experts, they go back to 1944 and move the young Godzillasaurus to a new home out of the path of nuclear testing. But the Futurians plans aren’t what they appear, as evidenced by them leaving their genetically engineered pets The Dorats in Godzillasaurus’ place…

Yet another creatively risky flick in the series, a risk that perhaps didn’t pay off – this film was released in America until 1998 (see below) and, since each succeeding film references it in some way, may have held up the rest of them too. Amusingly, this means that monsters like Spacegodzilla and Mech-King Ghiidorah made their first American appearance in the Trendmasters toyline.

Where can I sell movie posters and memorabilia?

This movie is all right by me. On the one hand, I love it when the humans have a plot conflict beyond “survive the monster fights” and “foreign terrorists from two centuries in the future” is a cooler idea than the somewhat genetic alien invaders. On the other hand, the time travel mechanics are spotty at best and King Ghidorah is a step-down form the planet-destroying physical god he began as in the Showa series. Your mileage may vary.