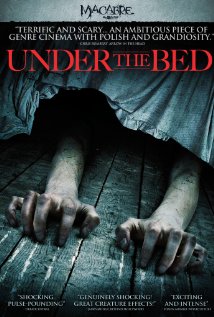 Under the Bed is a 2012 horror film directed by Steven C. Miller and written by Eric Stolze. It stars Jonny Weston, Gattlin Griffith, Peter Holden and Musetta Vander. It has an approximate running time of 87 minutes.

Under the Bed centers on Neal Hausman (Weston), a young man returning home after being sent away to stay with his aunt. He has some tension with his father (Holden) and couldn’t care less about meeting his new step mother (Vander). It seems the only thing Neal cares about is his brother Paulie (Gattlin). It seems Neal’s past has been plagued by restless nights due to a creature coming after him when he sleeps in his bed. Neal comes home to discover that his brother Paulie has been tormented by the same creature in his absence.

Under the Bed was pitched to me with a single sentence. I was told that Under the Bed is “about two brothers that have to fight a monster under their bed”. That movie seemed awesome in my head! I’m picturing an R rated Little Monsters with a bad ass Maurice trying to kill Ben and Fred Savage. Who wouldn’t want to see that movie!? I grabbed a copy from my local video store, picked up a pizza and sat down for what was to be a rad adventure battling the thing that lurks in the shadows of the bedroom.

What I got was far from what I imagined. Normally, I’d say it was my fault for building expectations. This is not a normal case, however. This movie was 87 minutes of a teen moping around scene after scene…after scene. Under the Bed felt like a bad Italian horror film from the 60’s at times by extending scenes in an attempt to build tension, only to leave me wondering what the point of that scene was. It teases many times that it’s going to pick up the pace and actually become a horror movie, but spends most of its time immediately back-tracking and giving us another scene of Neal and/or Paulie getting scolded by their father. The worst part is that when we did get to some good stuff, it was ruined by an abysmal ending that made absolutely no sense.

The premise of Under the Bed isn’t a bad concept for a movie by any means. It sounds awesome. The problem is that the story written isn’t enough to make it an interesting feature film. With some heavy editing this would make a killer 30 minute stand-alone short or part of an anthology. Unfortunately, this movie feels like it bit off more than it could chew and I was left wanting. Under the Bed sounds great on paper, but falls flat on screen.