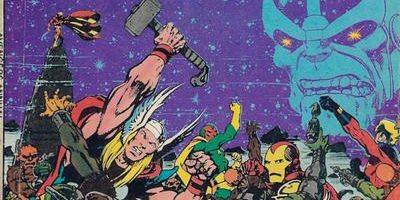 Welcome back!  For this week’s RETRO REVIEW, it’s time to pull out a comic book from the Marvel Comics vault!  So what am I feeling this week?  How about an Avengers book, featuring our heroes battling the villain, Thanos?  Sounds good to me, or should that be sounds bad?  Anyway, this week’s book is Avengers King-Size Annual # 7, from the summer of 1977!

The cover is both pencilled and inked by Jim Starlin!  It’s a little busy, well actually, very, very busy!  Here’s that cover in all it’s glory: 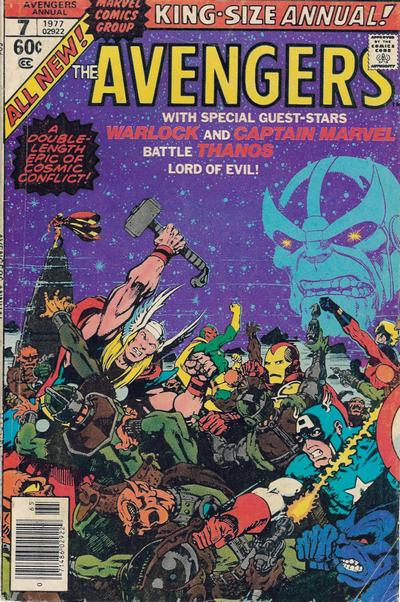 As you can see from the cover copy, the book proclaims that it’s The Avengers, with special guest-stars, Warlock and Captain Marvel, in battle with Thanos, Lord of Evil!  Wow, that certainly says it all, doesn’t it?  And if you don’t look closely, at the figure standing on the tall rock on the left side of the cover, you might miss Warlock completely.  He seems to be standing above it all, while Captain Marvel joins the Avengers battling Thanos’ hordes!  And above it all, Thanos’ ghostly head surveys the battle!

The story inside is entitled; “The Final Threat” and it is written by Jim Starlin, the pencil layouts are provided by Jim Starlin, with finishes and inks done by Joe Rubinstein!  This is the first part of the double-length epic of cosmic conflict between the Avengers and Thanos!  It is a complete story, but for the full story, you also need to pick up the Marvel Two-In-One King-Size Annual # 2, which also came out during the summer of 1977!  This double-length story brings the Thing, from the Fantastic Four, together with Spider-Man and adds them to the fray, as they must come to the Avengers rescue! Plus we, the reader, get to see Spider-Man and the Thing battle Thanos!  But that’s another Retro Review!

Back to the Avengers Annual # 7, the story opens with Adam Warlock discovering a dying Gamora, who has gone up against Thanos and lost!  Warlock takes her soul into his soul gem and then comes to Earth looking for the Avengers.  The Avengers are gathered in Avengers Mansion and are soon joined by Moondragon and Captain Marvel, they all seem to sense something big, and bad, is about to happen!

Then we get a long flashback to Warlock and the Avenger’s last battle against Thanos, when he laid his hands on a cosmic cube!  Then, with Captain Marvel’s help the Avengers were victorious against Thanos!  The Avengers are alerted to an impending invasion from the stars and go out to meet the large fleet heading towards Earth!

After many pages of the battle in space, we see the Avengers make it to Thanos’ command ship, where Captain Marvel and Warlock find a mindless, Pip! Possibly Adam’s only true friend.  Warlock takes Pip’s soul into his soul gem, as well.  Warlock then engages Thanos, with the help of Captain Marvel, but they are defeated easily.  Captain Marvel is knocked unconscious and Thanos kills Warlock!  Now it’s up to Iron Man and Thor to destroy Thanos’ synthetic Star Gem, which contained the essence of all the gems that eventually make up the Infinity Gauntlet!   Thanos threatens the two Avengers and teleports away!

Meanwhile we see what Captain Marvel witnesses, that there are somehow two separate Adam Warlocks???  Remember that previously Warlock had battled his own evil self, the Magnus, so we know that two versions can exist at the same time!  And one absorbs the dying one’s soul into his own soul gem, where we, the reader, find Adam reunited with Gamora, Pip and everyone else who he’s absorbed into the soul gem over his existence!

So it looks like we’ve witnessed Warlock’s demise and that he’s been given a “happy ever after”!  But we’re told that there is more to the story to be found in the aforementioned Marvel Two-In-One Annual # 2.  So I guess I better say that this RETRO REVIEW is to be continued!  So come back in two weeks for my next RETRO REVIEW of that Annual!

How Do I Divide My Collection Fairly?
November 1, 2022
Recent Posts
Categories
Events
January 2023 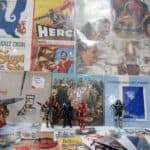