“Lord of Darkness” Gives Me Something to Chew On 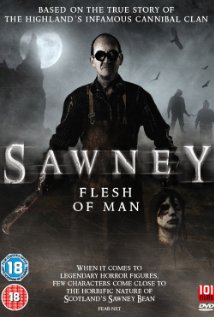 Sawney: Flesh of Man is a horror film from 2012. It was written and directed by Rick Wood and has an approximate running time of 90 minutes. It was retitled Lord of Darkness in the United States.

Sawney: Flesh of Man is a modernized telling of the centuries old story of Alexander “Sawney” Bean and his cannibalistic Scottish clan. The movie takes place in modern day Scotland and centers around a young reporter who is looking into the disappearances of young girls and calls the competence of the police into question. His investigation leads to the discovery of Sawney (David Hayman) and his screwed up family.

I really wanted this movie to be awesome since we don’t seem to get a lot of horror flicks from the mother land. Unfortunately, it falls right into the middle of the pack. For every awesome thing about this movie there’s an equally bogus thing that cancels it out, and that’s a damn shame. I could be a little more forgiving if this movie hit a few home runs, but it doesn’t. The only real highlight for me was the unsettling performance of Hayman. This dude had moments where I thought I was watching Robert Englund’s Scottish brother. There were definitely some similarities between Hayman’s Sawney and Englund’s early Freddy Krueger performances.

The main problem with this movie is that it goes back and forth from being plausible to completely over the top, and that ruined the flow for me. Just when I was getting caught up in this legit horror movie, something ridiculous happens that sucked me right out of the moment. Technically, this movie is aces. The acting was fine, the effects and prosthetics looked good and there is some beautiful Scottish scenery to be seen. The problem was in the details.

By no means was this a bad movie. I don’t want it to come off this way because I most certainly enjoyed it. It just wasn’t what I had hoped for. If you’re looking for a movie with a plot you haven’t seen one hundred times before, check out Lord of Darkness. There’s a really good chance that what bugged me won’t bug you.