What is Thanos’ First Appearance? 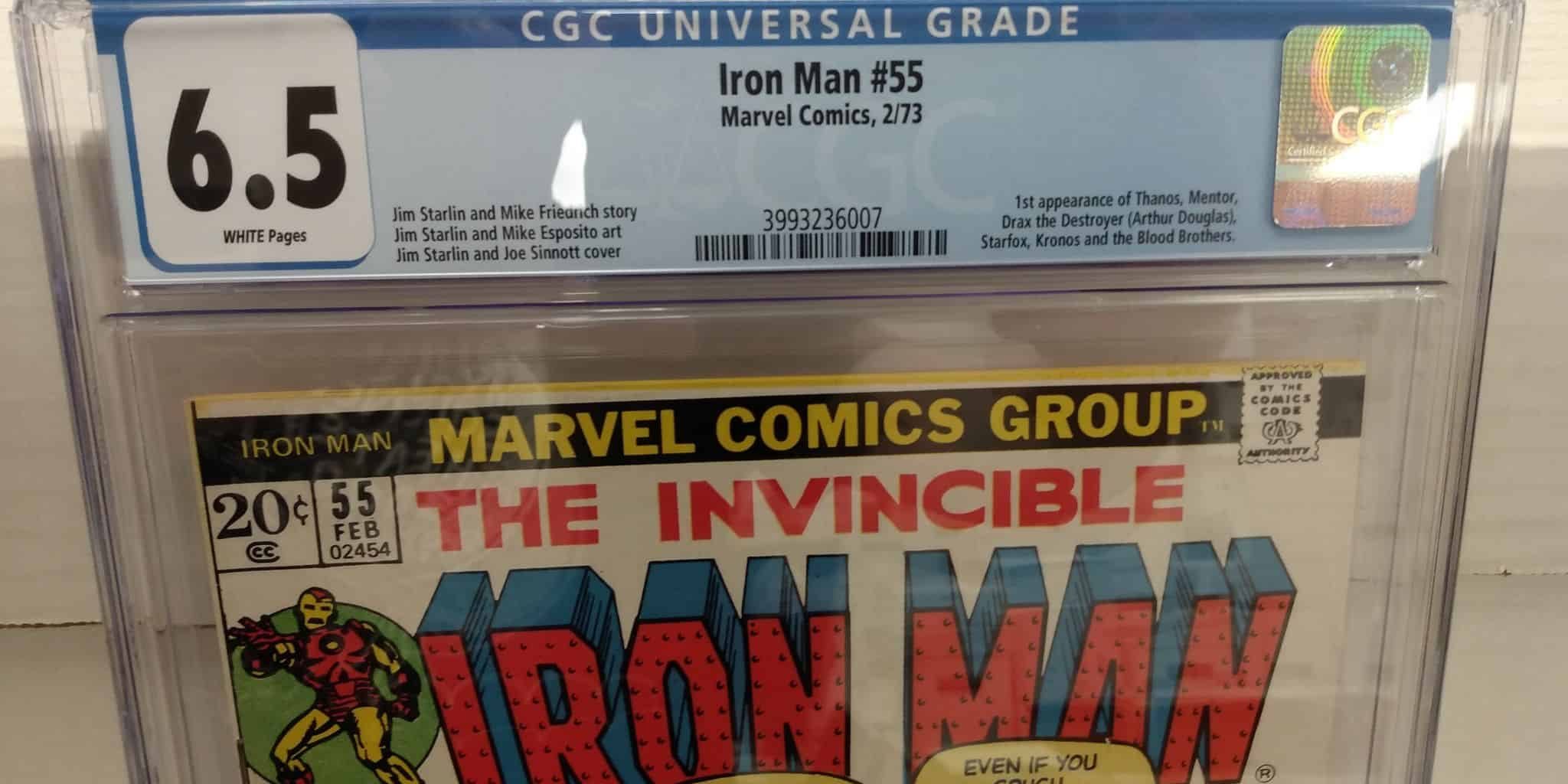 Welcome back to Consigned, Cool, & Collected! Each week, we here at Back to the Past pause to give you some insight into the cool stuff we handle each day. We’re working with a boffo Silver and Bronze Age Comic collection right now, so that’s what we’re focusing on. If these weekly teases are tantalizing you, mark May 21st on your calendar right now – that’ll be the live, in-room session featuring this collection. But for now, let’s talk about Iron Man #55 – seen here CGC graded at a respectable 6.5. 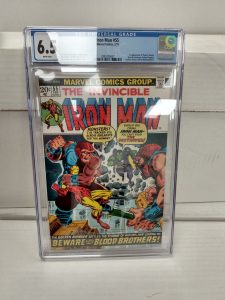 Iron Man #55, 1st appearance of Thanos. Coming to Auction in Late May!

How Comic Book Story-Telling Has Changed

To grock what we’re about to talk about, you first must understand how the comic industry has changed in the last thirty to forty years. Modern comics tells multi-part stories that read well in collected editions, and basically everything gets put out in book form. Twenty years ago, that shift was still in its early stages. Twenty years before that, collected editions were a truly rare thing.

Since newsstands, with constantly rotating stock, were still the primary distributor for comics, each issue had to be pretty self-contained. Whether it was telling a longer-form story or one-off tale, it had to be friendly to someone who had no way of easily picking up prior issues. Thus, it was much more common for there to be steady churn of writers or artists doing one or two issues on any given title.

Twenty-three-year-old Jim Starlin, fresh off a tour of duty in the U.S. Navy, started at Marvel Comics in 1972. One of his earliest assignments was drawing a few issues of Iron Man, specifically #53, #55, and #56. #53 was drawn alongside experienced artist George Tuska, meaning that #55 was his true first solo outing. And in true Marvel fashion, he plotted it as well, with the modestly more experienced Mike Friedrich handling scripting.

It was an unusually cosmic tale for shellhead. The issue opens with Iron Man receiving a telepathic message from the alien warrior Drax the Destroyer – “Beware the Blood Brothers!” Unfortunately, said alien brutes are already beating the tar out of Iron Man. They incapacitate the Armored Avenger and take him to their master’s base in the southwestern desert. There, the already captive Drax is being tortured and taunted by the cruel Thanos.

Marvelites’ 1st look at Thanos! He wouldn’t gain the power of pants until his second appearance.

Given a moment’s respite, Drax reflects on how he and Iron Man came to be in this predicament. Thanos is a native of Titan, moon of Saturn, and the son of its wise and peaceful ruler Mentor. Thanos was a twisted individual, using his race’s godlike power and advanced technology for war. He is exiled for these crimes but returns with an army of the worst brigands in the galaxy to conquer his homeworld. Mentor creates Drax the Destroyer, a seemingly artificial being of amazing power, to defeat his wayward son. On an uninhabited alien planet, Drax finds Thanos and challenges him to world-shaking battle. Unfortunately, Thanos is the winner and captures Drax.  Thus, we are brought back to where the story began.

Luckily, Iron Man is able to slip his captors and free Drax. The pair team up to battle Thanos and his henchmen, only to find out that the Thanos holding them captive is a robotic double. They narrowly escape the base before it self-destructs, and part ways. Drax heads back into space to hunt his mortal foe, while Iron Man returns to Stark Industries…at least until his next adventure begins.

Captain Mar-Vell Vs. The Mad Titan

That little try-out on Iron Man landed Starlin a steady gig as the writer/artist on Captain Marvel. Issues #25-33 of that title saw the Kree warrior battle it out with Thanos and his henchmen, who counted established villains like The Controller and the Super-Skrull among their number. It was an epic tale that featured Mar-Vell teaming up with The Avengers, Thanos’ brother Eros, Drax the Destroyer, and cosmic being Eon (who dubbed Captain Marvel “Protector of the Universe”, complete with new costume and hair color) to foil Thanos’ ambitions.

Starlin would leave the title soon after the story wrapped up, moving on to the equally cosmic Adam Warlock in the pages of Strange Tales. Thanos came with him, and his daughter/chief enforcer Gamora was introduced in Strange Tales #108. Warlock’s powerset included wielding the mighty Soul Gem, which Starlin would expand into the Infinity Gem mythos in the 90s. 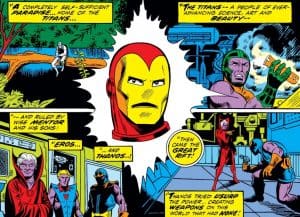 Iron Man gets an infodump on Thanos, including the 1st cameo appearance of his brother Eros AKA Starfox!

All of which would become the basis for the Marvel Cinematic Universe’s epic first decade of stories. A single fill-in issue, drawn and plotted by a newcomer to the industry, is ultimately the foundation for a multi-billion-dollar film franchise. Whatever Starlin’s been paid by Marvel over the years, there is no way it’s enough.

And that’s the terrific fun of old comics – a random issue, one that could have been easily forgotten, can become a key issue that will make people who’ve never read a comic in their life stand up and take notice. If you’ve got a comic collection you’re looking to bring to market, we’re here to help you using our decades of experiences tracking down IDing key issues like this. And if you’re just in the mood to read about cool stuff, Consigned, Cool, & Collected will be here for you every Monday.