Who The Heck Are Yank & Doodle? 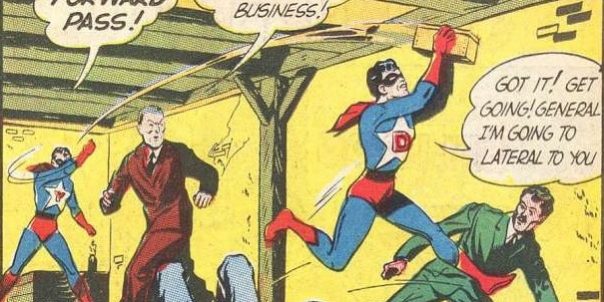 Welcome back to My Hero! Each week, Back to the Past uses this column to tell you why the obscure characters from our custom action figure collection are great! Years ago, we purchased the life’s work of an artist and comic fan whose chosen medium was granting forgotten comic characters the action figure immortality denied to them by major toymakers. We’re still sorting through it all, and we’re making new finds every week! This week’s find, who will soon be available on eBay, is the duo of Yank and Doodle! A patriotic duo, just in time for tax day! 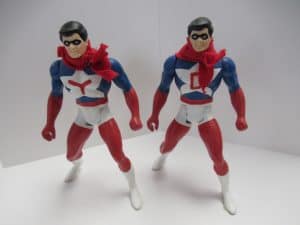 Yank and Doodle as they appear in our custom action figure collection!

Debuting in Prize Comics #13, twin brothers Rick & Dick Walter were the big men on campus at Mid-Town High! They were dominated every sport they tried their hands at AND they were the proud sons of a U.S. Army weapons designer. As American involvement in World War II loomed on the horizon, the boys tried to enlist in just about any branch of the service they could talk to. They were told the same thing by each: you are sixteen, come back in two years. Dejected, they returned home to find a note from Nazi sympathizers threatening their old man’s life.

An undeterred Walt Walters set out to deliver his new dive bomber plans to his superiors without requesting any security. His sons took it upon themselves to don patriotic costumes and follow him in secret. This proved fortuitous, as a German spy ring kidnaps him en route. As Yank & Doodle, his sons rescue him and take down the spy ring. Despite his sons only wearing domino masks to conceal their identities, he is left with no idea who Yank & Doodle really are.

At least until Prize Comics #34, when he finds their costumes in their room. He’s proud, but a bit upset they didn’t let him in on their secret. He gets a second shock that same evening when his old school pal Doug Danville asks to meet him. It turns out that Doug’s been the masked crimefighter The Black Owl for a few years, with an upcoming enlistment in the Army ending his career. He asks Walt to take up the costume in his stead. Walt agrees, and fights crime alongside his sons until Prize Comics was cancelled at #68. 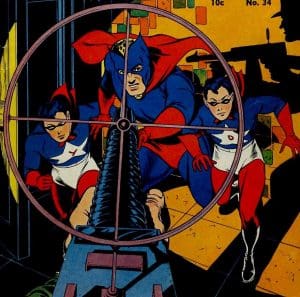 Yank & Doodle with their dad, The Black Owl.

Yank & Doodle are pretty much the perfect example of campiness in comics. First, their superhero names are Yank and Doodle. Grown adult crooks get their butt kicked by a teenager calling himself Doodle. Second, their origin is accurately summarized as “Too young for the military? Try vigilantism!” And finally, their old man joins in on the act when he finds out about their activities. If kids are fighting criminals armed with tommy guns using their bare hands, don’t encourage that behavior. It is hilarious stuff.

Sadly, Yank & Doodle’s inherent high camp and strong wartime premise consigned them to the ashcan of history. While they made it to 1948, most of the usual suspects in adopting old Golden Age characters skipped over them. Until Project: Superpowers came along, that is. The Walters Twins are prominent members of the younger generation in that universe, joining up with other teenage solo acts to buck their elders influence.

That said, Project: Superpowers hasn’t exactly been a font of action figures. Well, not mass produced ones at any rate. Its heroes are very well represented in our custom action figure collection. And if you’ve got collection like ours, be it custom figures, original art, garage kits, convention sketches, whatever – and are looking to sell it, get in touch!