What’s Important About The Election of 1972? 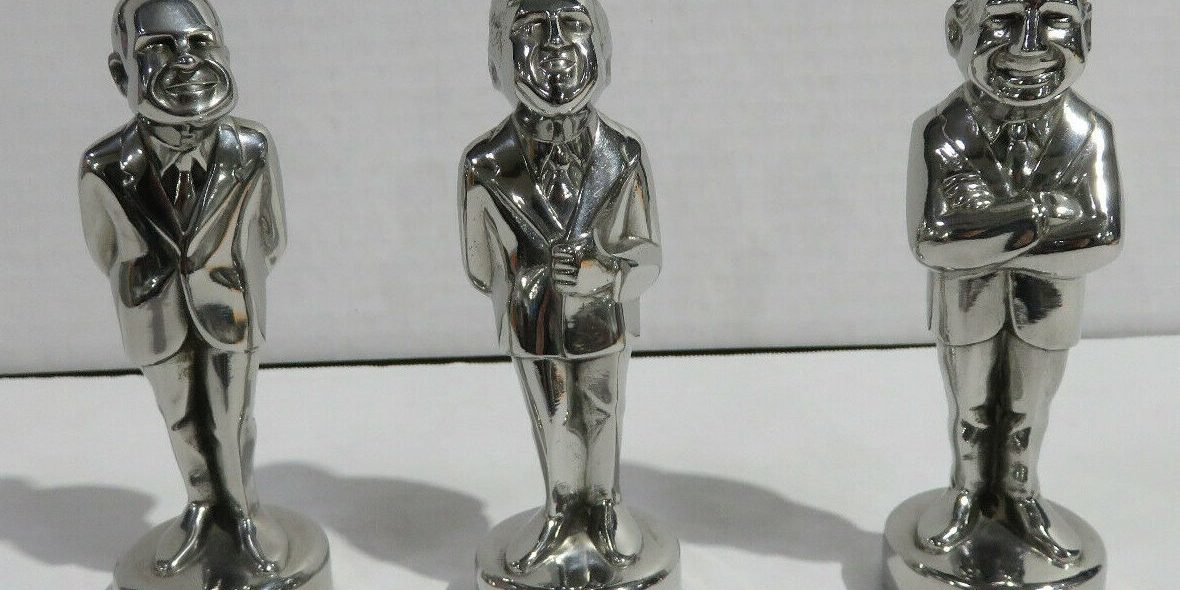 Welcome back to Consigned, Cool, & Collected! Every Monday, Back to the Past pauses to enjoy the cool stuff we’re handling every week, and today is no different. This week’s subject is a group of three metal statuettes currently available in our eBay store. They date to the early 1970s and depict then President Richard Nixon, his first Vice President Spiro Agnew, and his Democratic Party challenger in 1972, George McGovern. Specifically, we’re going to look at how quickly some of these men’s reputations would be destroyed. 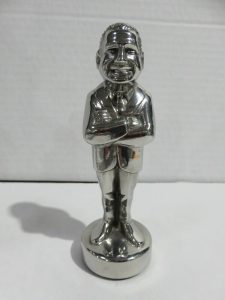 The George McGovern statuette in this set.

Generally speaking, it’s not that hard to win a second term as the United States President. Assuming you don’t get murdered or deathly ill, being an incumbent is much easier than being the challenger. That goes double if you’re pretty popular. Richard Nixon had been elected to the U.S. Presidency in 1968, following on the heels of the highly contentious elected term of Lyndon Johnson. According to Gallup, his approval ratings hovered between 50% and 60% throughout that first term with 1972 bringing him out of a slump. In fact, around the election his approval ratings were near what they had been after the moon landing. Suffice it to say, he was doing pretty well.

And that was reflected in his vote totals! Nixon won in a landslide, carrying 49 states for a total of 520 electoral votes. His challenger, George McGovern, carried one state plus Washington, D.C. for a total of 17 electoral votes. If there was a mercy rule in presidential elections, it would have been invoked here. After the election, it looked like everything was coming up Nixon. 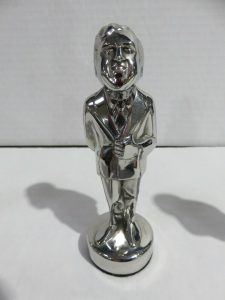 The Agnew statue from this set.

Spiro Agnew Was A Crook

In 1972, the U.S. Attorney for the District of Maryland began an investigation into corruption in Baltimore county. This worried Agnew, as he’d been county executive from 1962 to 1966 (when he was elected governor of Maryland). The U.S. attorney reassured the Vice President that his tenure was long enough ago that he was beyond prosecution and therefore not a target of the investigation. They began leaning engineering firm owner Lester Matz, purportedly involved in paying government officials kickbacks.

Matz was deeply involved in the corruption, and happily turned state’s evidence to save himself. Part of this involved revealing that he was still actively paying Vice President Spiro Agnew kickbacks. That information in turn lead to finding more people with records of Agnew’s longstanding corruption. Additionally, Agnew hadn’t paid any taxes on his illegal gains and that too is a crime.

Already mired in the Watergate Scandal, the Nixon Administration pressured Agnew to resign in the face of his unquestionably crooked conduct. He did so on October 10, 1973, less than a year after the Nixon/Agnew ticket had been re-elected.

Richard Nixon Was a Paranoid C.R.E.E.P. 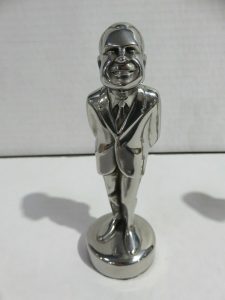 The Nixon statue from the set.

Remember what we said about Nixon’s re-election being a landslide, the kind you can see coming from a mile away? Yeah, well, that didn’t stop his campaign from pulling some criminally dirty tricks in the name of re-election. The seeds of Nixon’s downfall began on May 28, 1972, when employees of the Committee for the Re-Election of the President (known by its detractors as “CREEP”) first broke into the Democratic National Committee’s headquarters in the Watergate complex. This break-in was successful and undetected, but not all the listening devices planted worked. A second break-in was planned to repair them.

That’s the famous one. In the early hours of Saturday, June 17, 1972, Watergate security guard Frank Willis noticed some tape being used to hold doors unlocked. Believing it to have been left by staff or residents of the complex during the day, he removed it and continued his rounds. On his next patrol, he discovered that the doors had been re-taped and summoned the police. The burglars were caught red handed. CREEP would use half-a-million dollars in campaign contributions to defend the burglars, which is both a legally questionable usage of funds and a smoking gun that the two were one and the same.

Now, it is clear that Richard Nixon wasn’t aware of the plot before it happened, though he was perfectly fine with the use of spying and dirty tricks to undermine opposition. However, it was his use of governmental resources to impede investigations into the break-in that ultimately did him in. Most famously, he ordered the Department of Justice to fire the special prosecutor investigating the scandal and kept issuing that order until he got an Attorney General who would do so rather than resign in disgust (it was the #3 man at the Department, Robert Bork, who finally carried out the order).

The evidence of his unethical and criminal behavior ultimately became too much to ignore. Nixon resigned on August 9, 1974, twenty-one months after his landslide electoral victory and just ahead of an impeachment trial in congress.

Back To The Statues

What fascinates us about these statuettes is how specific a moment in American culture they represent – basically just 1972. Within a year, McGovern would be an amusing footnote in not one but two massive and wholly unrelated scandals. The names Agnew and Nixon would be mud after they both left office in disgrace. These statuettes are not the sort of thing that would have been produced even a few months after the election.

That’s part of what we love about collectibles! Often, they encapsulate a particular moment in history in physical form. They are the physical form of memory, be they fond childhood moments or massive historical changes. That’s the joy of our industry, and we are always ready to help you bring those memories to new folks. If you have a collection that you’re ready to sell, we’re here for you. And if you want to just keep enjoying these strolls down memory lane, Consigned, Cool, & Collected is here for you every Monday.