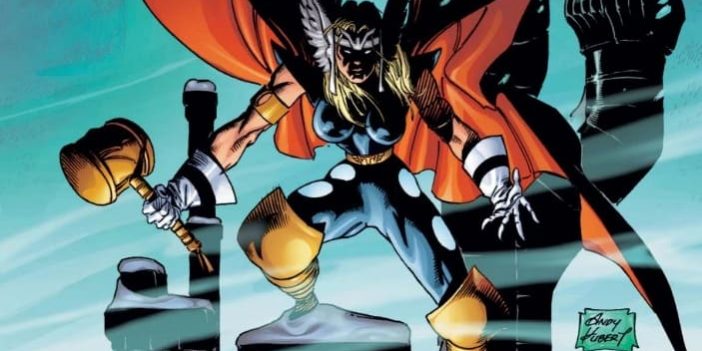 Thor: Love and Thunder has been blowing up at the box office! If you’ve seen it, you know that it ended with a major shift in the status quo for Thor. That’s the least spoilery way we can put it, and consider this your last warning to stop reading NOW unless you’ve either seen the movie or are A-OK with SPOILERS. We’re speculating on who a certain new character’s comic book counterpart is! On a related note, have you ever heard of Thor Girl?

Who Are “Love and Thunder”?

What no one expected about the newest Thor movie is that the title referred to a team. Specifically, it’s the dynamic duo formed by Thor and his adoptive daughter at the end of the film! The last shot of the movie is pair of them leaping into action to protect nice aliens from warlike invaders. Thor has his original hammer, Mjolnir, once more while his daughter wields the axe Stormbreaker – which is nearly as big as she is!

Thunder, obviously, is Thor himself. Love is the little girl, and that’s the only name she’s given in the film. She’s the daughter of Gorr The God-Butcher, resurrected by Eternity (the anthropomorphic personification of reality itself) and entrusted to Thor. She’s played by India Hemsworth, daughter of longtime Thor actor Chris Hemsworth.

But who is she? She’s never referred to by a given name, just “Love”. Which, to be fair, could be a given name but doesn’t fit well with Gorr. Her closest comic counterpart is Gorr’s son Agar. But speculation is rife, and we’re getting in on that! First up, the majority guess. 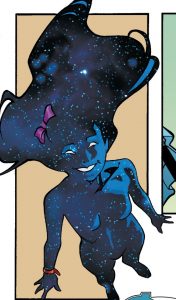 When she’s resurrected, Love is briefly seen as a reflection. In that reflection, she appears like Eternity – a humanoid starfield, albeit in the shape of a little girl. There’s a character in the comics that matches that description to a T – Singularity! First appearing in 2015’s A-Force #1, Singularity is a living pocket universe. New to sentience, she is more than a little naive and childlike.  She’s basically a baby version of Eternity itself, a universe small enough to walk and talk inside of other universes.

In two different realities, she’s been a key member of all-female Avengers squad A-Force. Since the Women of the MCU have been lobbying for a female Avengers squad since about Thor: Ragnarok, Love being Singularity could make for a good lead in to that. The character is a bit of a living MacGuffin in both A-Force titles to date, even causing the mainstream Marvel Universe version to form. But the rest of the Thor: Love and Thunder epilogue doesn’t exactly support that. No, we think Love is – or could become – Thor Girl.

Who Is Thor Girl? 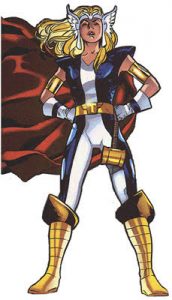 Owing to Stan Lee’s dislike of the character type, the Marvel Universe has largely shied away from having kid sidekicks. A notable exception to that came during Dan Jurgens’ run on Thor in the form of Thor Girl. First appearing in Thor #22, Thor Girl is…complicated. She starts off as The Designate, a cosmic being whose coming was foretold millennia ago. Her role was to guide sentient beings into their ascension past the physical. Thanos didn’t like that idea, and The Designate was forced to team up with Thor to prevent The Mad Titan and his allies from destroying her.

Starting in Thor #33, The Designate moved to Earth to stay close to her Asgardian protector. To do this, she takes the form of Asgardian teenager and names herself “Tarene”. As Tarene, she has powers roughly on par with Thor’s in terms of physical might. She even has her own unnamed hammer that functioned much like Mjolnir. All of that was her own creation, and she was able to access her greater cosmic abilities in a pinch. Even when she’d burn out those cosmic powers a bit, which happened now and again, she would revert to being Thor Girl.

Spiritually, at least, we think Love from Thor: Love and Thunder is already Thor Girl. Ties to higher cosmic powers? Check. Thor’s kid sidekick? Check. Under Thor’s protection? Check. Has her own intelligent, weather manipulating, self-propelling weapon? Check. Heck, the eye beams she unleashes at her guardian demonstrate she is potentially even more powerful than the God of Thunder. Since she’s a creation of Eternity, who knows that that might include!

Since her given name is never spoken in the film, it could easily end up being Tarene. If we were betting folk over here, that’s where we’d be putting our money. Thor Girl’s appearances in Thor, Avengers; The Initiative (where she played a role in Secret Invasion, soon to be a Disney+ series!), and Fear Itself: Youth In Revolt might be worth holding onto for a couple of years. If this speculation is ever confirmed, values will skyrocket and we’ll be standing by to help you sell them. Hey, we gave you the tip – it’s only fair! 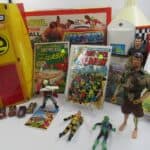