Welcome back to part two, in my two part, Fabulous Find column on the Witzend fanzines from Wally Wood and company! Though with issue # 6, Wally Wood is now only listed as the “illustrious founder” and the fanzine/prozine is now published by Ed Glasser and edited by Bill Pearson!

I’ve owned my copy of this fanzine for many years and it wasn’t until I pulled it out to review it here, that I noticed the cover, featuring two robots and lots and lots of gears, that the “boy” robot, labeled GMC, is giving metal “flowers” to the “girl” robot, labeled Ford!  Wow, I guess it pays to relook at these occasionally, as you just might find something that you’ve never noticed before! Take a look for yourself: 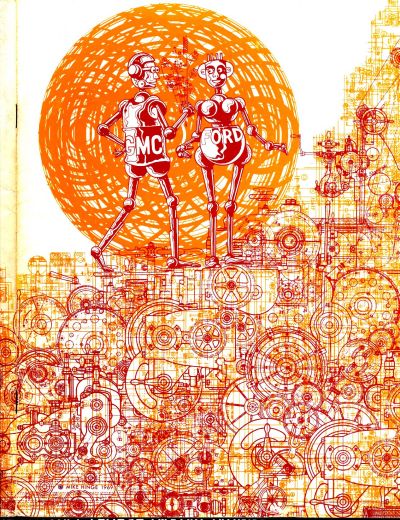 This cover is done by artist, Mike Hinge, not a big name in comic books, but I think that I have a portfolio done by him that was published through Jim Steranko somewhere! The subtitle to this issue is provided on the second page and it’s the … “Daring Compromise Issue”.  First up is a six (6) page story written by Bill Pearson and illustrated by Jeff Jones, entitled; “Alien”.  It’s got some lovely artwork by Mr. Jones!

Oh, the cover is a wrap around image and the Witzend title and number of the issue appears on the back cover.  The fanzine still sells for a dollar, as well!

Next is a five (5) page interview conducted with artist, Will Eisner, featuring Spirit artwork by Mr. Eisner!  There is a back to back yellow page next, that appears to enable people to subscribe to Witzend, or to change the address that their subscription copies should be sent to.  It’s got a couple of nice illustrations included, as well.

Next up is “Qwamb!”, a seven (7) page story written and drawn by a Sorrel Garika, who ever that might be.  It’s a story of a master plumber named; Maynard Qwamb and it takes place in Detroit!

Following this is a eight  (8) page science fiction story by Wally Wood.  It’s entitled; “The Spawn Of Venus” and it was a never published story, originally done for William Gaines and EC Comics!  It is published here for the very first time!  It’s by far the highlight of this issue, no question!

Then there is the another back to back yellow page of ads for other publications, as well as, the 1969 Comic Art Convention to take place at the Statler Hilton Hotel in New York City.

Finishing out this issue is a ten (10) page Avenging World story by Steve Ditko!  I believe this pre-dates the self published comic book by Mr. Ditko of the same name!  I’m not a big fan of Ditko’s Avenging World stories, so I’ll reserve my comments here.  It’s pure Ditko though, no question about it!

The inside back cover is a full page illustration by Gray Morrow!

Issue # 7 sports a nice Vaughn Bode cover, though it may be a little violent for some!  It features his character; Cobalt 6o.  This issue is sub-titled; “America’s Favorite Homemade Magazine”.  Bill Pearson is now listed as the Editor and published with Phil Seuling listed as Associate Publisher!  Here is the front cover: 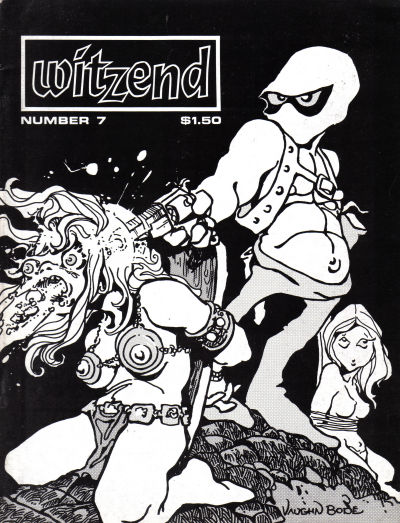 The lead story is the cover subject, as well.  It’s  simply entitled; “Cobalt 60” and is both written and drawn by Vaughn Bode.  It runs ten (10) pages.

Following this is two (2) back to back blue colored pages, i.e. four (4) pages.  They include two (2) pages of letters, a next issue blurb, an “important notice” regarding subscriptions, a list of Witzend back issues that are still available and a couple of ads.

Next, is the second Avenging World story by Steve Ditko in as many issues.  This one is seven (7) pages, and following this, is a full (1) page Mr. A episode by Ditko.  I tend to like his Mr. A adventures much better than his Avenging World stories.  what can I say?

Next up is “Ike And His Spoon”, a six (6) pages story written and drawn by Roger Brand, who we saw in earlier issues of Witzend.  His drawing skills are not on the professional level, at least in my opinion, though the story is interesting.

Following this story is a one page illustration by Ed Paschke, showing comic characters, like Little Orphan Annie, Little Lulu, Caspar the Friendly Ghost, Dennis the Menace, Little Dot and Mickey Mouse laying around in what looks to be an opium den!  I would think this type of illustration would more likely be found within the pages of an underground comic book!

Next, we get the first appearance of Bernie Wrightson within the pages of Witzend, with a one (1) page “Limpstrel” strip.  It features a man interacting with talking dinosaurs!

Then it’s those four (4) more pages of blue tinted paper, with a nice full page, reprinted Alphonse Mucha illustration!  Followed by a one (1) page Bill Pearson strip.  Then a four (4) page strip, shrunk to two (2) pages, done by writer Bill Pearson and artist Tim Brent, entitled; ” Mr. E”, which appears to be a satire of Steve Ditko’s Mr. A!

Then another one (1) page Limpstrel strip by Wrightson featuring a family brawl.  The last story in this issue is entitled; “The Journey” and it’s a lovely ten (10) page story written by Betty Morrow and painted by Gray Morrow!  And the issue wraps up with a back cover drawn by Kenneth Stout!

Witzend # 8’s cover is done by Ralph Reese.  It always makes me think of of a spinner rack of comics!  Why is that?  Well, the cover features a shadowy figure in an alley, saying “psst!” to a guy walking by.  And it reminds me of the old spinner racks with the top of the rack often saying … “Hey Kids … Comics!”  FOr some reason I think that the guy in the alley is about to say that to the guy passing by!  What do you think? 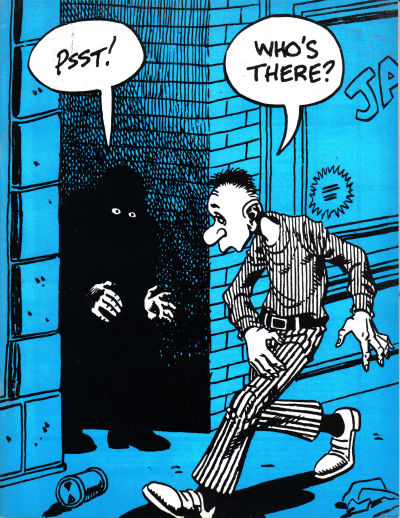 Now, don’t you see what I’m talking about?  Leading off this issue is part three of Wally Wood’s “The World of the Wizard King” illustrated novel.  As Wood himself, writes; this will serve as a “somewhat abbreviated account of the life and times of Odkin the Sly.”  The full tale will one day be published inn it’s full form, but that was many years later!

Next we get a one (1) page strip by Bobb Stewart and a seven (7) page story from which the cover illustration comes from.  It’s by Bill Pearson and Ralph Reese and it’s entitled; “Barf, The Insurance Salesmen”.  Within the story, Pearson even has one of the characters referring to the Qwamb! story form the issue before, giving the comic a little continuity!

Next up, is “Foxtale”, written by Nicola Cuti and drawn by William Stillwell.  It runs only two (2) pages.  Then we get two pages of single page illustrations entitled; “Holding the Bag” and “Passing the Buck”.  These may be reprints from an old 1932 magazine, but I’m not sure.

Following that is a ten (10) page Edgar Allan Poe poem, illustrated by Frank Frazetta, entitled; “The City In The Sea”.  Next is a one (1) page strip by Steve Ditko entitled; :The Break-Out!!” and features a Tiger escaping form the Zoo!

Then we get eight (8) pages entitled; “The Hunting of the Snark” by John Adkins Richardson, based on the poem by Lewis Carroll.  The last page tells of the next two issues and the change of formats from humor and fantasy strips to “one shots” on a variety of subjects.

Things are then nicely wrapped up tight with a really cool back cover, though I’m not sure who did this and as far as I can tell, it’s unsigned.  Take a look: 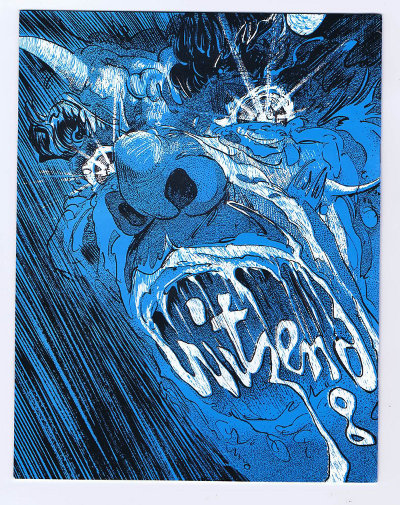 I don’t own this issue, but with access to the internet, I’m able to show you the nice cover as drawn by Jeff Jones. 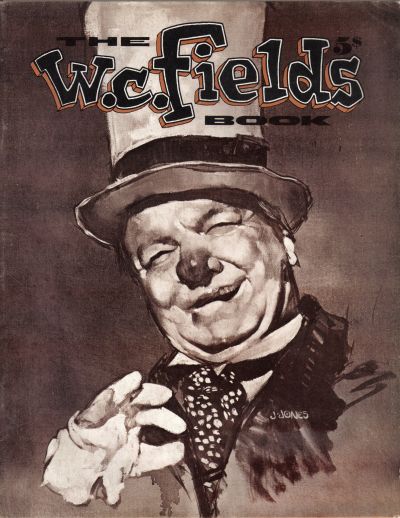 As you can see above, Witzend # 9 is billed as the W. C. Fields Book and sold for $5.00.  It contained over a hundred (100) rare stills, most of them never before published, or so they said.  It also contained a W. C. Fields game and a separate full color 8 1/2 by 11 reproduction of the Jeff Jones cover which could be framed.

This issue sports a very nice Wally Wood wrap-around cover.  Here is the front, followed by the full wrap-around! 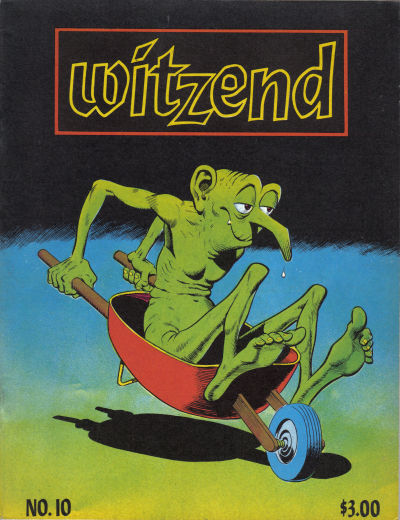 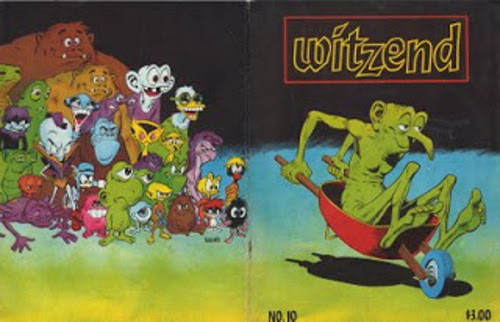 This issue is published by the CPL Gang Publications and has Robert (Bob) Layton listed as Publisher and co-editor, with Bill Pearson listed also as Editor and co-Publisher!

It leads off with “Kym, Lost In A Dream!”, an eight (8) page story written by Bill Pearson and drawn by Dick Giordano.  It tells a tale without any words!  Pretty nice!

Next up is a ten (10) page story entitled; “39 / 74”, written by someone going by Guyla.  Sorry, I don’t know if that’s a first name or a last name.  Though the artist is the great, Alex Toth!  The story is credited as being copyright Marvel Comics Group, so it may be a reprint, but if so, I do not know where it first was published!  This story takes place on a ship in 1939 and is gorgeous.

Next, is six (6) great Sally Forth pages by Wally Wood!  Followed by a one (1) page illustration by P. Craig Russell, who is also making his first appearance within the pages of Witzend!  This is followed by another new artist, this being Mike Zeck. who draws an eight (8) pages story, written by Bill Pearson, entitled; “The Avenging Dodo”.

Then we treated to another full page illustration, this time by Walter Simonson!  Who also makes his first appearance within Witzend!  Then it’s Nicola Cuti returning with a ten (10) page story drawn by his partner on Charlton Comic‘s E-Man, Joe Staton, entitled; “My Furry World … And Welcome To It!”  And that’s it!

A pretty strong issue with a lot of new artists, submitting very nice jobs!  This is likely the second strongest issue, all in all.  Again, at least in my opinion!  This also is the last issue I own in this fanzine series.  But to make things complete, or as best I can, I’ll at least provide you views of the covers of issues # 11 and # 12.  Here ya go: 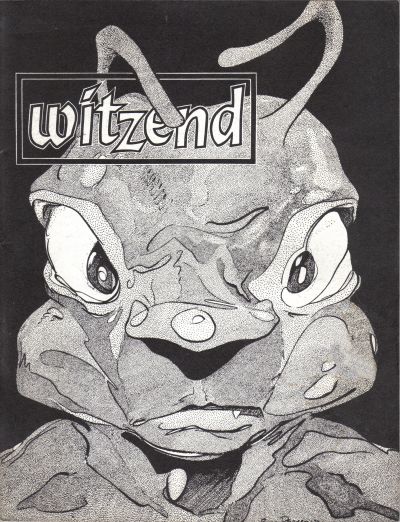 I thought I owned this issue, but I have searched high and low for it to no avail.  And the last issue: 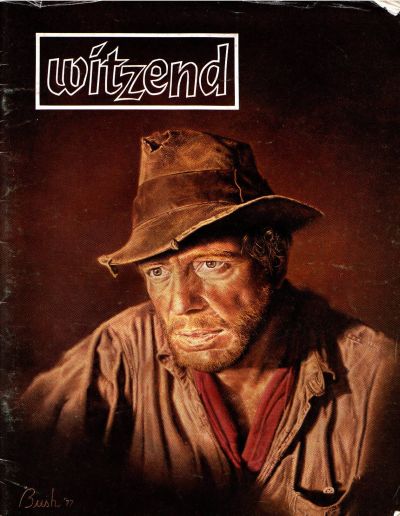 I hope you enjoyed this look at the fanzine/prozine; Witzend, and I’m sorry that my collection isn’t complete, but this will have to do until I can track down the missing three issues.

So stayed tuned and I’ll see you all next week with another RETRO REVIEW!  Be seeing you …