1 out of 5 – Would Recommend: Faust: Love of the Damned 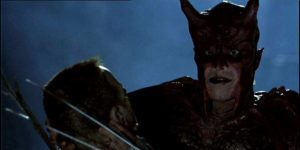 Welcome back to 1 out of 5 – Would Recommend, where the influx of 90s indies and anti-heroes into our recent auctions prompted me to bust out my DVD of Faust: Love of the Damned. It was purchased about a year ago when a run of the comic upon which it is based first came up for auction, but I only just got around to it.

Artist John Jaspers is attacked in his home by vicious gangsters and his girlfriend is murdered before his eyes. Whilst considering suicide, he meets a mysterious man called M. who offers John the power to get vengeance. At first, this turns him into the devil’s blade wielding hitman but he reveals and becomes the gargoyle-esque beast called Faust, blood-soaked defender of the innocent against M.’s machinations!

The flick is produced and directed by Brian Yuzna, who produced all of the Re-Animator films and wrote/directed installments 3 and 4. It was co-written by Faust co-creator David Quinn, something somewhat unusual even for an indie comic movie.

I bought this flick expecting it to be awful and, as such, I took my time getting around to watching it. Turns out, it’s actually rather quite good – although man does some of the weird, violent sexual imagery (toned from the original comic, I’m told) gets a bit tedious by the end. Nothing amazing, but a lot better than a flick like Barb Wire or Spawn. The fact that it was made in Spain and not within the traditional Hollywood studio system is probably a big reason for that.

Side note, Faust the love of the Damned got a theatrical film release before characters like Spider-Man, Wonder Woman, Iron Man, Shazam, Hellboy, et al did. Admittedly, it did not get nearly as wide as a theatrical releases those characters, but that’s amusing nevertheless. Are you looking for the best place to sell your vintage movie collectibles?

Categories: Comic Books, TV & MoviesBy Chris WalkerMay 14, 2019Leave a comment
Tags: 1 out of 51 Out of 5 Would RecommendFausthorror movieTim Vigil