1 out of 5 – Would Recommend: Karate Robo Zaborgar 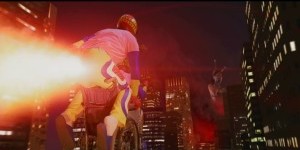 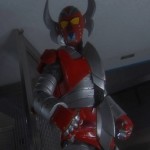 The title card was in Japanese, so here’s the eponymous robot!

Welcome back to 1 out of 5 – Would Recommend, where the definition of bad is flexible. Today, we’re looking at 2011’s Karate Robo Zaborgar!

Hot blooded secret policeman Yutaka Diamon, with the help of his robot partner/motorcycle/kind-of sibling Zaborgar, battles mad science terrorists Sigma to save the Earth! Then he falls in love with Sigma’s top lieutenant, Miss Borg, and things get weird.

Who Made This Thing and What is It?

Writer/Director Noboru Iguchi, who also made a movie called Robo-Geisha. The film is a loving send-up of 1970’s Japanese super hero shows made by remaking one and playing up the ridiculous aspects. It’s kind of like Batman ’66 for stuff like Ultraman and Johnny Sokko and his Flying Robot.

This movie isn’t so much “bad” as “completely and utterly bizarre”, but it succeeds at what it set out to do. It is a loving tribute to the oddness of Tokusatsu action shows of yesteryear, to the point of showing clips from the original series corresponding to nearly every of the movie’s ridiculous plot points during the credits. It parodies the genre by playing its absurdity just as straight as the originals while bringing in a bigger budget and more realistic consequences, and it does it pretty well. If you grew up watching the aforementioned Ultraman, Johnny Sokko, or even Power Rangers, this movie is waiting for you on Netflix.