1 out of 5 – Would Recommend: Mighty Ducks 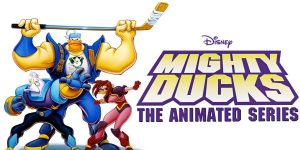 My weekend plans were interrupted by cruddy weather in Grand Rapids, meaning I spent entirely too much of my weekend shut in to my hotel room watching Disney Plus. Ergo, we’re looking at the Mighty Ducks animated series this week!

Six ragtag rebels from Puckworld, an advanced alien society of humanoid ducks, expel the brutal Saurian aliens occupying their planet. In doing so, they are accidentally exiled to another dimension – ours! Landing in the city of Anaheim California, the six resolve to protect humanity from the Saurians while showing off their skill at their homeworld’s primary pastime, philosophy, and military training exercise: HOCKEY!

Imagine for a moment that you’re one of the largest entertainment companies on the planet Earth and you have a successful live action film franchise about a team of underdog kid hockey players. You’ve even extended the name to an NHL franchise you own. How do you capitalize on that for children’s television? If you answered “a toyetic action cartoon about a team of alien superhero ducks whose day job is being the professional hockey team The Mighty Ducks of Anaheim, lead by an actionized version of the real team’s mascot“, you’ve clearly taken the same drugs the people at Disney did in 1996.

The show has a surprisingly good sense of humor, its writing staff seeming to be acutely aware of how ridiculous the premise was. Overall, it’s just a middle of the road 90s action cartoon…but for some people, that’ll push the right “comforting childhood familiarity” buttons.