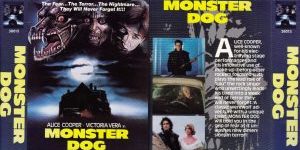 Welcome back to 1 out of 5 – Would Recommend, where I never read a calendar before planning my blogs. Seeing as today is the first day of October, 1st of the 31 nights of Halloween, I’ve pushed back the JSA’s other media history in favor of Shock-Rock legend Alice Cooper’s one and only starring film role, 1986’s Monster Dog!

Up-and-coming rock star Vincent Raven returns to his childhood home with his girlfriend and her film crew to shoot a music video for one of his new songs. There are only two problems with this plan: First, there’s a pack of wild dogs that’s terrorizing the countryside, tearing people apart. Second, Vincent’s father was murdered 20 years ago my neighbors who believed him to be a werewolf and the fact that Vince is back in town at the same time that dogs have started running wild does not go unnoticed by them…

This film was written and directed by Claudio Fragasso, under the alias Clyde Anderson. Fragasso had worked (often uncredited) under fellow Italian schlock legend Bruno Mattei in the 70s & earlier 80s, but this is one of his first films in which he flew completely solo. He’s most famous for another solo effort: 1990’s Troll 2.


As to the star, Alice Cooper head recently beaten his alcohol problems and wanted to see if he could undertake a larger scale project while sober. Performing in a schlocky, foreign-produced, direct-to-video horror movie also appealed to his sensibilities:

“They told me it would never get released in the movie houses, and I said, ‘Great. It should just be one of those movies you can rent at the video place.’ And they said that’s what it would be, so I did it … I got a lot of money for it [laughs]. I think I was the biggest part of the budget

To his credit, everyone I’ve seen a quote from said Alice was a pure joy to work with on this flick – and in most any other context, come to think of it.

Five Reasons To See It

I’m sure you’re shocked to hear that Claudio Fragasso made a movie that’s not particularly good. That said, fans of Alice will get a kick out of seeing play the lead in a horror flick (even if it ain’t his voice for most of it) and fans of schlocky 80s VHS horror will find it to be an enjoyable romp.