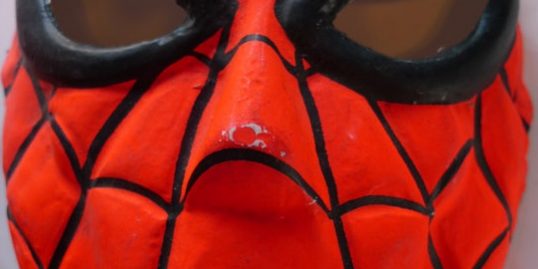 It’s time for another Fabulous Find, and this week I bring you something that even I don’t have in my own personal collection!  And what is this collectable, you ask?  It’s the 1963 Ben Cooper Spider-Man Costume!

Well, back in the Fall of 1963, things at Marvel Comics were still pretty much getting started.  The Fantastic Four comic had been around for just two years and Marvel published the the Fantastic Four’s 20th issue in September of ’63.  The Hulk comic had come and gone in just six (6) issues.  Spider-Man and Thor (in the comic entitled; Journey Into Mystery) had a year’s worth of issues published.  Also in the summer of 1963, Avengers # 1 and X-Men # 1 were published.  Hopefully that puts into perspective exactly how new things were at Marvel Comics.  They hadn’t even published a total of 100 comics by the end of September 1963.

At this time they were approached by an outside vendor that wanted to license one of their characters for a Halloween costume!

Enter Ben Cooper, Inc.  They had been selling a generic costume which they were calling Spiderman for a number of years during the 1950s, when they heard about this new character that Marvel Comics was publishing, called Spider-Man!  Possibly fearing a lawsuit, they approached Marvel Comics and quickly licensed the right to market and sell a new costume based on the Marvel Spider-Man!

And with that, history was made!

They made and sold a brand new Marvel Comic Book Spider-Man character costume, they likely began selling it in September and through October 1963, thus becoming the first ever Marvel collectible, other than the comics themselves!

Here’s the costume in the box, as sold in stores: 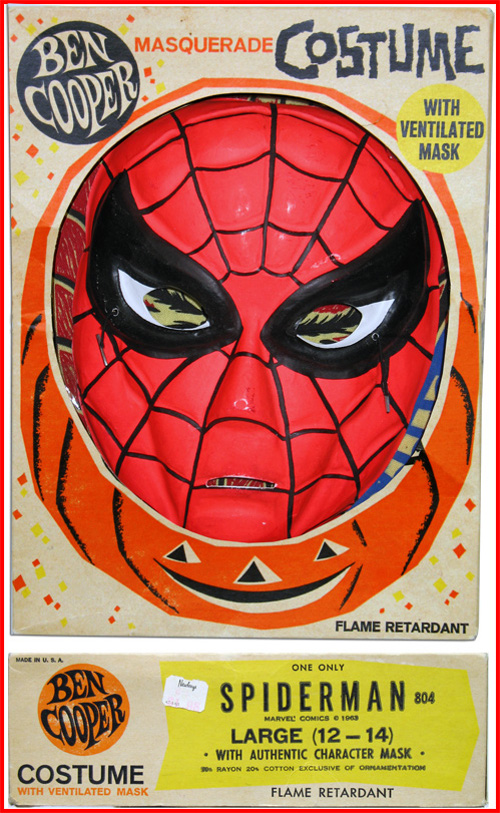 And here it is, in all it’s glory, out of the box:

The marketing and production of this costume marks the very earliest Marvelmania collectible.  It pre-dates the 1964 Merry Marching Society membership kit by a full year!  The box was clearly marked as copyright 1963, though it’s hard to see in the picture above.

Unfortunately, I don’t have the answer to that question, and as I stated right from the beginning, I don’t own any of the Ben Cooper Marvel costumes.  Though I wish I did.  Why is that, you might ask?  Because, the Marvel Silver Age Collectibles book, written by J. Ballman, which was published in 2007, estimates that the 1963 Spider-Man costume in it’s original box is worth up to $10,000!  And I found a collector on the internet who actually owns one of these collectibles and he states that he was offered $20,000 for his, a year ago!

He also says that there are only three documented costumes in the hands of collectors.  But that doesn’t mean there might still be others out there to be found, as that seems like an awfully small number to me.

So I’ll be keeping my eyes open and you should too and one day maybe we’ll come across this Fabulous Find in person!

Have a Merry Christmas and Happy Holidays to you and yours!  And I hope you find something wonderful in your stocking or under the tree from ol’ Saint Nick!