A Christmas Tale, or Santa Claus and Superman Hang Out and Do Shots at The North Pole

I Will Tell You #90:
A Christmas Tale; or, Santa Claus and Superman Hang Out and Do Shots at The North Pole 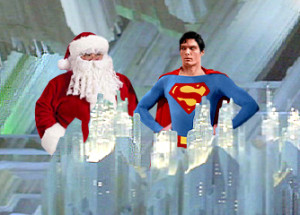 Santa Claus and Superman at the Fortress

The older, heavier man ever so slightly wrinkled his brow upon hearing this sentence, stroking his long white beard before moving his hand away from his face and towards the shot glass filled with a clear blue liquid on the table in front of him. Wrapping his pudgy fingers around the glass, he lifted it slowly and put it to his lips. With a quick tip of his head backwards, he poured the contents of the glass into his mouth and gulped it down quickly, his long white hair rustling against the back of his red shirt and suspenders. With nary a grimace or any outward reaction to the spirits he had just ingested, he turned the glass upside down in his hand and slammed it back down on the clear, crystalline table, next to seemingly dozens of other similarly emptied and overturned glasses that cluttered the area.

He then looked at the younger, handsome, square-jawed man sitting across from him, with his own collection of empty and inverted shot glasses sitting between the two men. The older man’s eyes narrowed and a smile crossed his lips, as he began to utter a statement of his own.

“Never have I ever . . . engaged in fisticuffs with a bald gentleman clad in green and purple armor.”

The younger man snickered slightly, and reached for the unusual looking, ornate, and nearly empty bottle at the center of the table, and poured the remaining amount of the blue concoction inside into another shot glass. He slid the empty bottle over to the side of the table where it joined a half-a-dozen other identical and similarly empty bottles. Picking up his glass, he hoisted it before the older man before downing its contents in a similar fashion. He placed the inverted shot glass down on the table and looked at his opponent. 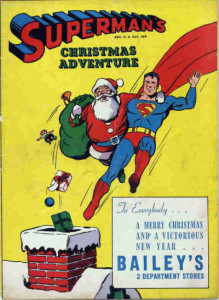 Through a Shot Glass, Empty

“That was the last one. I guess that’s it, then,” the younger man said in a deep, almost heroic sounding voice.

“It’s just as well,” the white-haired old man retorted. “After all, the children look up to us. What would they say if they knew the two of us were imbibing alcoholic beverages like two common drunkards?”

“Oh, come on now, Kris,” the square-jawed man replied. “You and I both know that alcohol doesn’t affect us that way. Even Thanagarian Nth-Metal aged whiskey. Wouldn’t mind another one, though; that went down pretty smooth.”

“Is that what this stuff was?” Kris asked, picking up one of the empty bottles and looking at its label and the unreadable alien text. “This can’t be easy to come by, Kal. And we just went through your entire stash.”

“No worries,” Kal assured him, looking above through the viewing portal on the ceiling that showed snow swirling about as blown by the frigid northern winds outside. “It was worth it. We’ve been neighbors up here for a long time; I don’t know why we don’t do this more often.”

“Well, you keep plenty busy saving the world every other day, it seems. Just as it seems I never even get out of the house,” Kris laughed. “But then, we both have a lot of people who depend on us.” 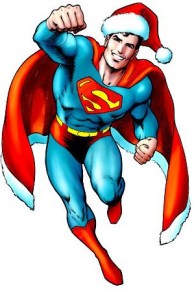 Superman’s Day Off, But Not Santa’s

“Christmas Eve seems to be the only day I can ever spend here,” reflected Kal. “Everything seems so peaceful. It’s one of the few days of the year where I can come up here and just relax.”

“I hope you don’t mind me stopping by on your only day off,” Kris interjected.

“Oh, not at all, Kris; I’m thrilled to have company for a change. I guess calling the place a ‘Fortress of Solitude’ doesn’t exactly sound welcoming to people.”

“If it’s company you want, Kal, you’re always welcome to stop by the workshop, especially around this time of year. It’s all hands on deck right now; I’ve got every elf on the staff on duty.”

“Yeah, aren’t you a little busy to be hanging out at the neighbor’s then, doing shots of alien liquor?” Kal asked sarcastically.

“Ho!” Kris guffawed. “Don’t be ridiculous! There’s nothing for me to do while the sleigh gets loaded up. Might as well rest up until it’s time to go; I’ve got a long night ahead of me.”

“Do you want some help, Kris? You’re pretty spry to be able to cover the whole world in one night, but I’m pretty quick myself. Between the two of us, we could –”

Kris reached across the table and put his hand on Kal’s shoulder. “Ho ho ho! I appreciate the offer, my friend, but this is my duty, and mine alone. You’ve got your own responsibilities, and you’ve done plenty to help already.” 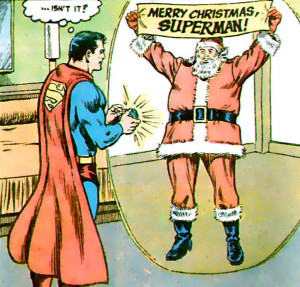 Superman gets a present.

The Kryptonian Origin of Santa’s M.O.

That last part was true enough, Kal thought. The mini-Phantom Zone portal inside a carrying sack he had provided to Kris allowed for an unlimited amount of toys. The Kryptonian DNA spliced with his reindeer allowed them to harness the power from the sun, giving them the ability to fly. And that Red Kryptonite sample that one reindeer got ahold of gave him that one weird extra power.

The sudden sound of an alarm chirped through the air, and Kris looked down at his side and silenced the smartphone on his belt. “That’s the missus,” Kris said, standing up and putting on his red coat. “Time to go. Thanks for letting me come by, Kal. Let’s do this again sometime.”

“I’ll look forward to it!” exclaimed Kal, as Kris buttoned up his coat and put on his red hat. Kal escorted him to the fortress’ front door, and Kris made his way outside through the snow. “And Merry Christmas!”

“Merry Christmas, Kal! And to you a good night!” yelled Kris, as he vanished in the darkness.

As Kal closed the door behind him, he was pleased that he got to spend the evening with such an incredible figure. A man who brings so much happiness to so many people. A man who symbolizes the good natured and giving spirit that so many people possess. A man who inspires so many people to do good for others, all the while being written off as fake, or part of a childhood fantasy, or just plain made up.

He makes a difference in a lot of people’s lives, Kal thought. A real difference. He’s not a hoax. Not a dream. And not imaginary.

“All that good he does. And they call me a superhero.” 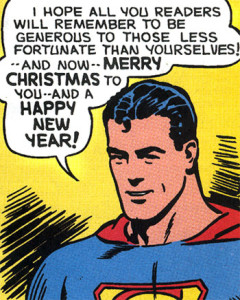 In the literal blink of an eye, Kal cleaned up the empty liquor bottles and glasses. As he did so, he noticed a giftwrapped box on the table that he would have sworn was not there earlier. Curious, Kal picked up the box and then noticed a card affixed to the box with a ribbon. Kal opened the card, which read:

“To Kal: you’re just as imaginary as I am, but you make a lot of people very happy, too. From your pal, Santa.”

Kal smiled and closed the card, and noticed additional words on the back that read:

Kal laughed aloud, feeling that he was still being watched by his friend, even though Kris had departed. So instead of peeking through the wrapped box with his x-ray vision, he peeled it open by hand.

And inside, was one last bottle of Thanagarian Nth-metal aged whiskey.

Kal looked up through the viewing portal again, and using his super vision to peer high up in the nighttime sky, could see Santa and his reindeer and sleigh as they headed out for their yearly rounds. And there was Santa waving to him. Kal held up his gift as an acknowledgment of thanks.

“Merry Christmas, Santa,” he whispered. “And thank you.”

As Superman started to nod off later that evening, he fondly recollected the early evening he had spent with Santa Claus.

Never had he ever slept with such an overwhelming sense of peace.

Merry Christmas to all, and to all a good night!