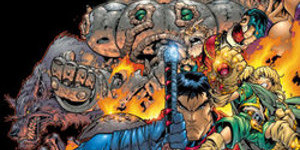 This first issue features a very nice wrap-a-round cover by creator Joe Madureira (or Joe Mad, as he often is known by) providing the pencils and Tom McWeeney supplying the inks!  This comic kicks off this fantasy series with a bang!  Madureira also provides the story with some assistance from Munier Sharrieff.  And the interior artwork is provided by the cover artists.

Here’s the cover to the first issue: 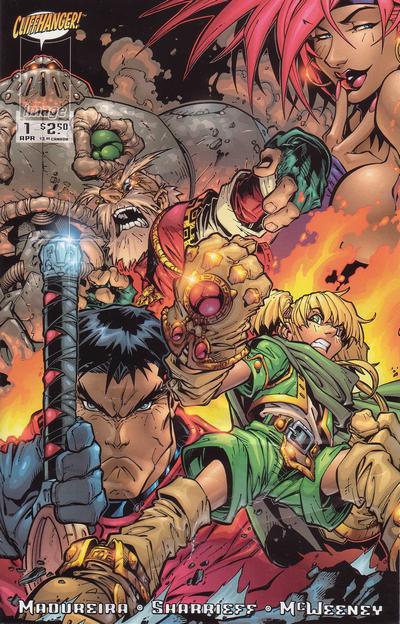 Battle Chasers # 1 One of Multiple Covers

And here is a look at the full wrap-a-round cover, sorry about the quality of this scan: 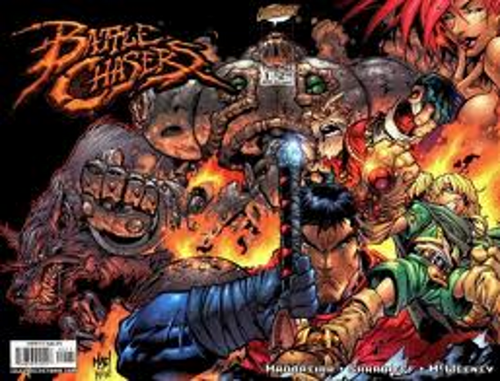 Within, in a story entitled; “The Most Dangerous Game”, Joe Mad introduces the reader to his main characters quickly.  First there is the wizard Knowlan, then a ten year old girl, Gully, a war-golem named Calibretto, a man named Garrison, who once was the greatest swordsmen alive and finally Red Monika, who was dressed, or maybe I should say undressed, which got all the fan-boys drooling all over their comics, thus ensuring the need to buy additional copies!  Needless to say, Red Monika soon became the break-out character of the series!  And boy was she busting out all over!  Nudge, nudge, wink, wink!

With all the introductions to be made, there is not much room for much more story, but Madureira packs in as much as he possibly can and the first issue is the better for it!  Knowlan awakens from a bad dream in the middle of the night and calls out for Calibretto.  Gully is fleeing through a forest, attempting to get away from werewolves, who can speak, trying to keep a wooden box away from their evil clutches!  The box it seems once belonged to her father, Aramus.

Calibretto comes to her aid and forces the werewolves to run away, though he is struck by lightening while saving her.  He brings her and her box, back to Knowlan.  Meanwhile, Joe Mad cuts away for a four page interlude, where he introduces us to Garrison in a tavern, who is seemingly trying to drink himself to death.  Red Monika approaches him there and tries to enlist his help in a prison break.  There appears to be a past between the two characters, but we don’t get that background here in the first issue.  Garrison turns Monika down.

As Joe Mad returns the reader to Gully, Knowlan and Calibretto and we find out a little of Gully’s back story.  Her father has disappeared and she and her governess are attacked by the werewolves.  Her nanny is killed and Gully grabs the box and runs for her life!  We also see the lead werewolf reporting to a shadowy figure, telling him of their failure to gain the box.  He promises the werewolves powerful aid for their next attack.

And the first issue ends with Knowlan opening the magic sealed box and revealing the contents as Arimus’ power gauntlets!

A pretty good first issue to a series that had a lot of potential to be something special.  But it was a series which was plagued by long delays in getting the individual issues out, sometimes a full year went by before the next issue hit the stands and the comic lost all momentum.  Eventually nine issues were competed, but the story was never finished, as Joe Madureira went into video game designs and left his creation and his fans in the lurch!

I understand that Image Comics has reprinted all of the issues, with some unfinished artwork from the tenth issue that never was published, into a trade paperback, which, if you’re interested, you could pick up and not have to hunt for individual issues.  Check out your favorite comic retailer to see if it’s still available.

Madureira is now back drawing comics again, so there is some hope, though slim, that he might go back to these characters and finish their story. I guess time well tell, and truthfully, I’m not so sure I’d be willing to once again invest my comic dollars in a book, even it’s creator didn’t support!