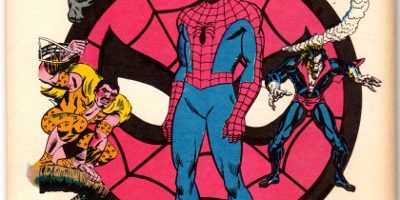 Welcome back to another Fabulous Find!  This week I’ve brought to light the convention program book from the 1976 Marvel Comic Book Convention, held in New York City, entitled; Marvel-Con ’76!

This was one of the last small cons before cons became a really big deal.  Quickly comic book conventions went from small intimate cons for a small group of fans to large money making monstrosities!  This was before Creation Cons, Chicago cons or even that giant con that took over in San Diego; Comic-Con!  This show was held at the Hotel Commodore on April 23 through 25, 1976.

I will state right up front that I did not attend this convention.  Back in 1976, I was still in college and did not have the kind of money that would allow me to travel to New York City for a comic book convention.  I had previously attended a couple of conventions in the Detroit area, in 1973 and 1974.  These were the Detroit Triple Fan Fairs held in downtown Detroit hotels for a few years.  In fact, it was attending the 1973 Triple Fan Fair, which got me back into comics after a couple years away.  But that’s a story for another day!

So why do I have the program booklet from the Marvel-Con ’76, if I didn’t attend that con?  Good question, and you certainly have the right to ask me!  My answer; because it’s cool!  Yep, back in the day, I made it a practice to pick up, any and all neat items, like this from comic book shops or from dealers at conventions.  Back in the seventies and eighties, not many people wanted this kind of stuff, let alone collected it, so I could, and did, pick it up cheap!

So what’s in this particular booklet?  Well, here’s the cover: 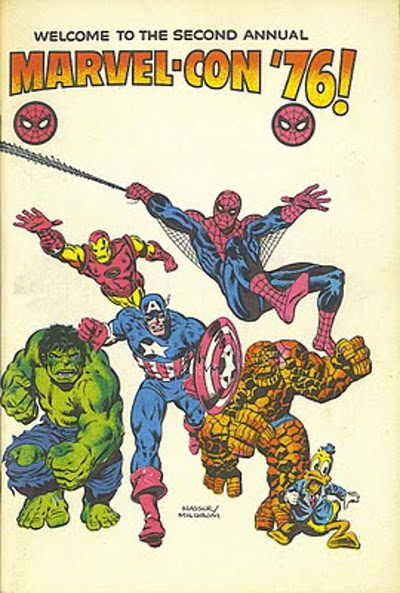 The book features a nice image of Captain America, Spider-Man, the Hulk, Iron Man, the Thing and Howard the Duck drawn by Mike Nasser and inked by Al Milgrom.  As you can see, the Marvel heroes are charging right towards you, ready to leap off the cover!

The art on the back cover is equally nice, featuring Spider-Man  and five of his deadly foes; the Green Goblin, Kraven the Hunter, the Rhino, the Lizard and Morbius, the Living Vampire!  It’s not signed or credited, but I’d guess that it’s the work of none other than, John Romita Sr.  Please let me know if you know otherwise!  Take a peek: 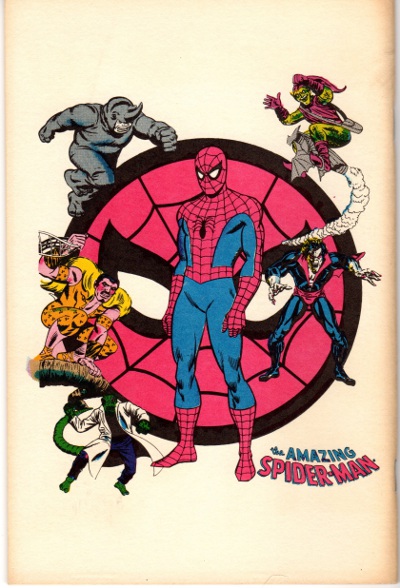 The book is forty-eight black and white pages, plus the two covers in full color.  The booklet has some nice features mixed in with Marvel house ads for various comics and also some ads from outside businesses.  Vince Colletta acted as the chairman for the con, or at least the booklet celebrating the convention.  The book was edited by Thomas Sciacca, with assistance from Howard Bender.  Staff members were; Jim Burns, Dominic Corrado, Jim Glenn and Warren Storob.

Art for the book was provided by Marvel Comics and the artists represented are; Neal Adams, John Buscema, Tony DeZuniga, Frank Giacoia, Al Milgrom and Mike Nasser.  Stan Lee is credited as publisher of the book.

Here’s a look at the Table of Contents to give you an idea of what this book contains: 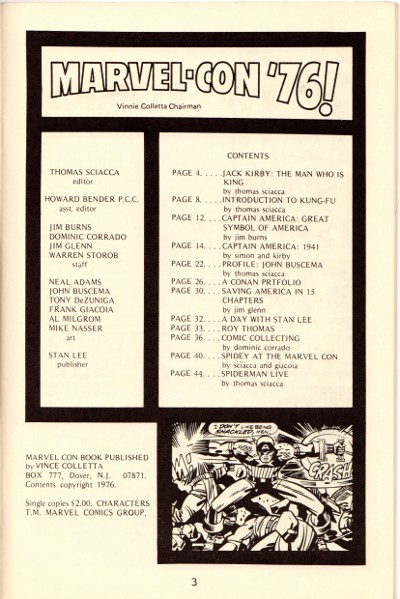 As you can see there are short articles and profiles on; Jack Kirby, Kung-Fu, Captain America, John Buscema, and Comic Collecting. There is a three page Conan the Barbarian portfolio (not as grand as it sounds).  There is also an article on the 1943 Republic Pictures’ Captain America fifteen chapter serial, plus a reprint of the first comic story by Joe Simon and Jack Kirby!

One of the coolest ads is for the Workshop for Comicbook Arts put on by John Buscema!  Others are for the Sons of Origins book by Stan Lee and for the 1976 Mighty Marvel Bicentennial calendar!  And of course, there is an ad for subscriptions to current Marvel comic books.

All in all, a pretty cool Fabulous Find!  And here are a couple of things I found out on the web, regarding the Marvel-Con of 1976, the add for the con that ran in Marvel comic books that spring: 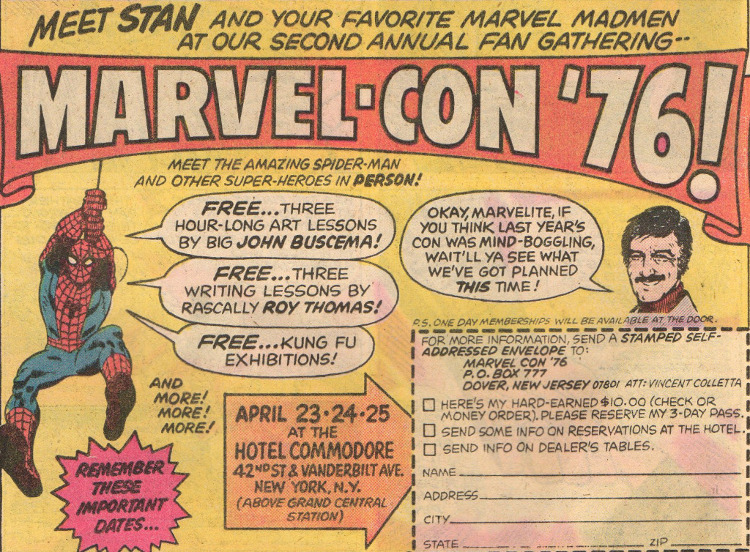 And a pic of the t-shirt that was available to purchase at the convention!  I wonder how many of these are still around? 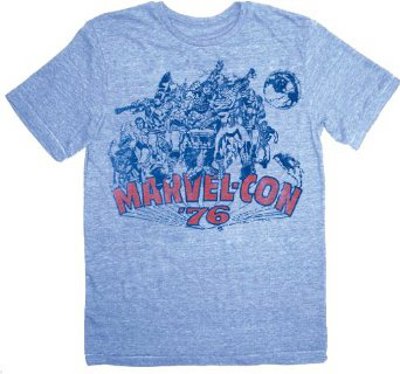 That’s all I’ve got for you this week, fans, but come back next week for another Retro Review and again in two weeks for the next Fabulous Find!  Be seeing you …