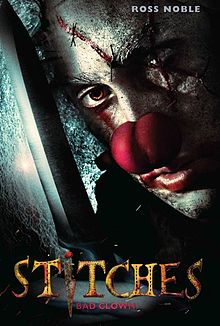 Stitches is a 2012 British/Irish horror film that falls into the slasher subgenre. It was written and directed by Conor McMahon. It stars comedian Ross Noble and Tommy Knight.

Entertainment On a Budget

I few weeks back I popped in a DVD and decided not to skip past the previews. Nothing really caught my eye, but the trailer for Stitches made me chuckle. A week or so after that I went to my local Best Buy to pick something up. On my way through the movie section, I saw a copy of Stitches on sale for $4.99. I figured it was worth at least five bucks. If it ended up being a bomb at least I didn’t pay full price, right?

Stitches is about a rough around the edges party clown named Stitches that doesn’t really seem to have his heart in it. After an unfortunate incident at a child’s party leaves him dead, he comes back from the grave years later to get revenge. Now, you can look at this one of two ways. The first is that this sounds completely dumb and there are much better ways to pass your time. The second, and the one I chose, is that this sounds completely dumb and I’m going to be thoroughly entertained because of it. Luckily, I was right.

Innovation By Being Obvious

This movie is completely predictable and absurd and I love it. It doesn’t try to be anything that it’s not and it embraces its absurdity. The best part about this movie is the creative kills. You can only see someone get impaled by a chainsaw or catch a machete with their face so many times before it feels like you’ve seen it all before. When the guy doing the killing is a party clown and all of his kills are clown themed, it’s just plain awesome. While Stitches is made great by its titular character and his antics, the rest of the cast serves their purpose and are also quite entertaining, especially Bulger. That kid had me cracking up.

Stitches is a success due to McMahon keeping it simple and staying true to the genre and the camp of 80’s slasher flicks. He knew exactly what he wanted to do and executed it perfectly. Ross Noble did an excellent job portraying Stitches and I found myself cheering for him a few times during the movie. I never thought I’d find a sleazy, murderous clown so delightful. Stitches isn’t the best movie you’re ever going to see, but it’s all kinds of entertaining. This is a movie that is definitely worth multiple viewings, but I think would work best if watched with a few like-minded friends.