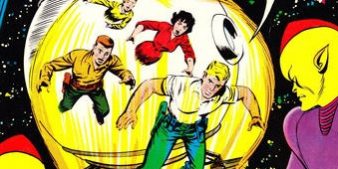 Happy day after Thanksgiving, or as they say in the retail trade, Black Friday!  This week’s RETRO REVIEW is from DC Comics.  The book in question is … Rip Hunter — Time Master # 18, cover dated February 1964.  The original Rip Hunter series ran twenty-nine (29) issues, so this one is about two-thirds through the run.

The cover is penciled and inked by artist, Bill Ely.  He may not be that well known but he does a nice job on Rip Hunter.  This cover features Rip and company facing off against a dinosaur!  D C Comics just loved putting dinosaurs on their covers back in the early Silver Age and this one fits the bill.  Take a look: 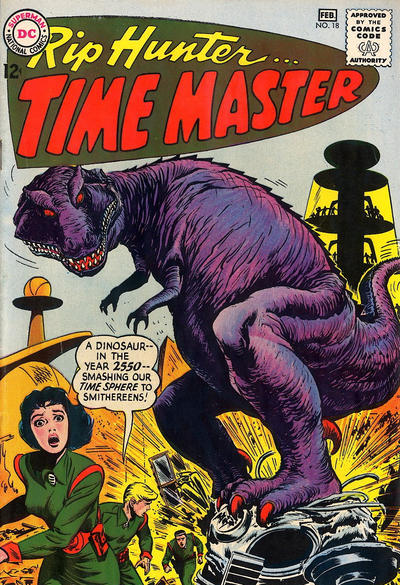 The comic is a full length story, totalling twenty-five pages!  The story is entitled; “Public Enemy of the 26th Century”.  It is written by Jack Miller and the art is once again provided by Bill Ely, who did both the pencil and inks!

The story begins with our hero, Rip Hunter, being accused of stealing all the “velium” from the year 2550 via a transmission into the present from the future!  Rip admits to committing the theft and uses his time sphere (not be be confused with the Legion’s time bubbles) to return to the year 2550 to “face the music”!  They put Rip on trial and not only find him guilty, but sentence him to twenty years in prison!

At this point, Rip claims he hasn’t committed any crime, but that he doesn’t even know where (or when) he is!  His pal Jeff steps in and helps Rip escape.  Together they try to get to the bottom of the crime that Rip has been accused of.  Rip and Jeff track down the real criminals, but need to find the proof that he’s innocent.

Dinosaurs in the 26th Century

Chapter two of the story  has Rip and Jeff facing off against a dinosaur that has been created using an evolution ray, though it appears the ray is more a devolving ray, as it takes something in the present and devolves it!  Together Rip and Jeff manage to avoid being squished by the dinosaur, but before overcoming the dinosaur, Jeff is hit by the evolution ray and devolves into a caveman!

Chapter three starts with Rip having the defeat caveman Jeff, without injuring him to badly! He thinks he has him trapped, but caveman Jeff easily rips a metal door right off it’s hinges and is quickly after Rip.  Luckily, Corky & Bonnie, choose that moment to appear in the future and they manage to rescue Rip from caveman Jeff!

Rip comes up with a plan to use the time sphere to launch himself in a torpedo into the criminals headquarters.  He secures the evolution ray and using it evolves Jeff back to normal and the dinosaur back to a common species of lizard, thus saving the day.  The captured criminals are turned over to the law of 2550 and Jeff has no memory of becoming a caveman, as the team returns to the present, with Rip Hunter, Time Master exonerated!