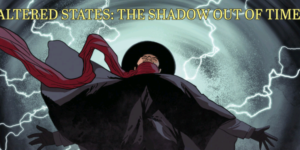 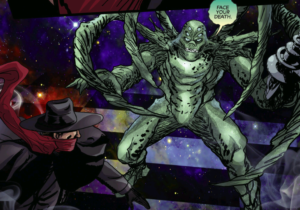 Welcome back to Strange Times & Places, where even the oldest Heroes can get a new spin. On that note, this week we are reading Altered States: The Shadow #1!

This one probably counts as an imaginary story, albeit one that has nothing in particular that prevents it from taking place and regular continuity.

While meditating in his sanctum, The Shadow finds himself drawn into a strange arena and beset upon by bizarre alien creatures. He will have to use all his wits and prodigious mental abilities to defeat these monsters and figure out just what the being in control of this strange dimension, EDEN, wants! 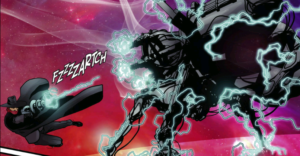 Really, there isn’t much of anything different from a mainstream Shadow story in this one shot. It is, in a way, the first part of a story that would be a shadow elseworlds – The Shadow chooses to go into the future to fight off an alien invasion on the very last page. This is kind of a disappointment as it really doesn’t portray The Shadow as doing much of anything that would be out of place and a regular Shadow story. Sure he’s fighting aliens, but it’s all in his head so it doesn’t really place him in a situation too far outside of his norm – if the explanation was that it was a hallucination courtesy of Shiwan Khan or the Voodoo Master, the story would work just as well. It’s the first two pages of a decent what if story stretched out over an entire issue and it left me feeling rather unsatisfied. 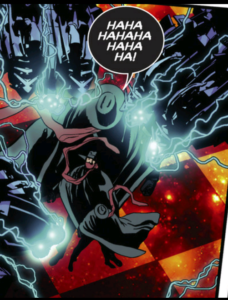 Kent Allard is such a happy guy.

NEXT WEEK: Tokusatsu Gesundheit gets into the spirit of Christmas and nostalgia by watching “I’m Dreaming of a White Ranger”, the original Power Rangers Christmas episode!