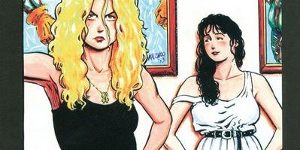 And we’re back ….. with another new RETRO REVIEW. This week it’s time for an independent comic book, so I’ve extracted from the vault the first three issues of Strangers In Paradise. These first issues were published by Antarctic Press. The first is cover dated; November 1993, the second; December 1993 and the third; February 1994. The book was/is the brainchild/lovechild of writer and artist Terry Moore. He did the pencils and inks for all three covers and he wrote, pencilled, inked, and even lettered the first three issues.

Here is that first cover: 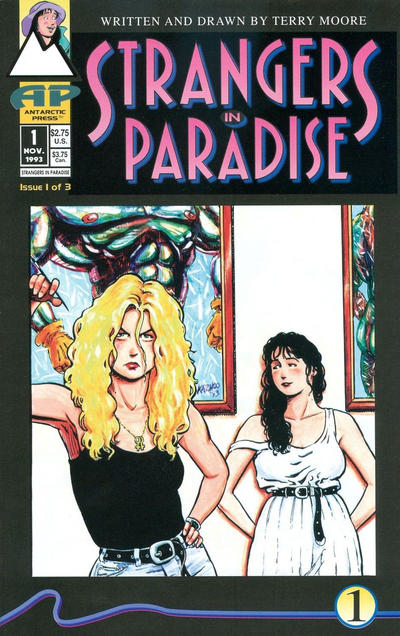 This is the issue that introduced to Terry’s readers, his main characters; Katina Marie (Katchoo) Choovanski, Francine Helen Peters, David Qin and Freddie Femer.  The book opens with a caption in the very first panel that begins with …10 years ago and the second panel provides the title of the comic through lines in a play … “you can’t always go home … You can’y always be warm inside …that without love, we’re never more than strangers in Paradise!

Oh yeah, this first issue’s story is entitled; ‘Breaking Up Is Hard To Do!”

Francine has a role in the play and before going on, she complains to her drama teacher that her costume, a toga, won’t stay up.  Of course she is told to go on anyway, and hijinks arise.  A vase with water is spilled.  A character slips in the water and grabs hold of Francine’s togo to try and stay on his feet, but down he goes and down goes Francine’s toga, leaving her topless in front of the whole auditorium.

The story then leaps ten years to the present.  Francine and Freddie are a couple and Francine and Katchoo share a house.  Freddie sometimes stays over with Francine.  As the story develops, the reader finds that Katchoo is also in love with Francinie.  Freddie has been pressuring Francine for sex but she wants to wait.  They have a big fight Freddie storms off to work.  Francine decides to surprise her and goes to his office dressed in just lingerie under a trenchcoat.  She busts into his office, throwing off her coat to find Freddie with a secretary bent over his desk.

Meanwhile Katchoo has met David Qin and they go out for coffee and we find out that Katchoo is an artist.  When she returns home, she finds Francine at home upset over Freddie.  Freddie calls and Francine agrees to meet him, hoping to make things right again.  He doesn’t want any part of this, and in fact has another woman waiting for him in his Porsche.  Francine becomes distraught and rips off all her clothes in the park where they meet.

Freddie leaves, Francine manages to make it back home before crashing her car into the garage and Katchoo and David come to her rescue.  But not before Katchoo declares that Freddie is a dead man!  Thus ends the first issue!

The second issue is entitled; :Katchoo’s Revenge”,  Here is the cover to issue # 2: 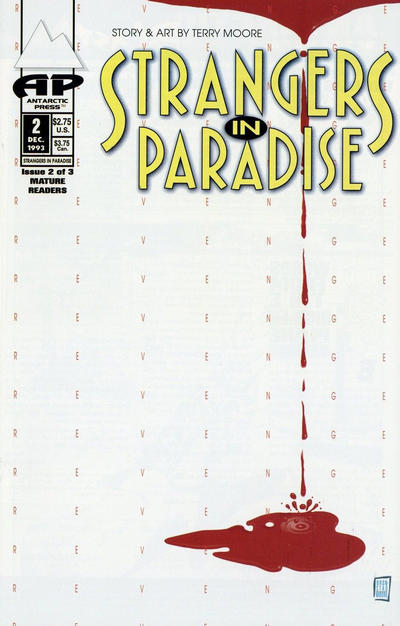 It’s s striking cover, but I think it is the weakest of the first three.  Again everything is done, cover, writing, pencils, inks and lettering, by Terry Moore.

The second issue opens with a funny three page dream sequence that really doesn’t have anything to do with the story, but does reveal a little something about Katchoo.  Then things pretty much pick up from where they left off in the first issue.  Katchoo and David try to console Francine.  After Katchoo puts Francine back to bed, she leaves to find Freddie.

The scene jumps to Freddie bringing a new girl, let’s be honest …bimbo, back to his apartment for some fun and games.  At this point Katchoo breaks in on them and we find out Freddie’s pickup is a hooker.  Katchoo manhandles Freddie over the next couple of pages and eventually pulls a gun on him and sends the hooker packing.

The scene once again switches back to Francine’s and Katchoo’s house, where David is still waiting on Katchoo to return.  They have a moment and Katchoo reveals what her revenge on Freddie is and on the last page of issue 2, we the reader also get to see.  Without revealing to much let’s just say it involves clown make-up and a magnifying glass!

Which brings us to the third an final issue of the Antarctic run.  Her’s that cover: 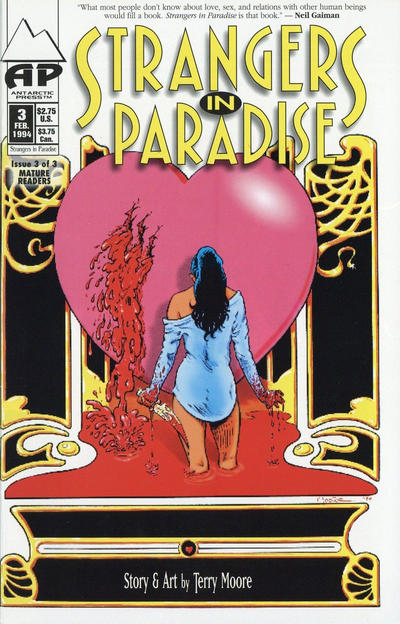 Issue three, entitled; “Busted”, opens with Francine up and recovering, but not quite there yet.  Then the doorbell rings and Katchoo is surrounded by Policemen and a SWAT team.  She is arrested and taken into custody.  We also find out that Katchoo has at least a prior felony charge against her.  So she is locked up tight.

Meanwhile Francine enlists the help of Freddie’s secretary (Whom he fired) to get some dirt on his work accounts.  Francine and Margie break into Freddie office and finds some damaging evidence and use it to blackmail Freddie into dropping all charges against Katchoo!

The last issue ends with Francine, Katchoo, David and Margie has a celebratory dinner and the mini-series ends on a high note, well at least, on a happy note.

The comic and the storyline would continue, but from Abstract Studios, which was a self-published imprint of Terry Moore.  Later he would also try Image Comics, but not to much later he switched back to self-publishing under the Abstract Studios banner.

This is an excellent series, well written and well drawn and I highly recommend it.  You don’t even have to search out all the individual issues, as it has been reprinted in various formats from collected trade paperbacks to even an omnibus edition.  So you have no excuses, if you haven’t read this excellent series, seek it out an give it a try, I guarantee you won;t be sorry.

Thanks for stopping by and be sure to return next week for a new Fabulous Find and again in two weeks for the next RETRO REVIEW.  Be seeing  you …