I WILL TELL YOU #41: Not An Imaginary Story

I’ve spent the past month talking about comic book continuity in this space, so for everyone’s sake out there, including mine, I’m going to take a break from it for awhile. At least until DC or Marvel do something so whack in their comics regarding the issue that I’ll have no choice to address it. Especially DC; if they spill paint on that brand new canvas so soon, I’ll be all over that like, um, comic fans on a message board.

In the meantime, though, I’m going to leave comic book continuity behind and focus on a far more serious topic. This is a huge change of subject, huge enough to warrant a paragraph break. I mean it; I’m going to get serious here. You’ve been warned.

OK. Imagine a horrible tragedy, one that no one saw coming, where thousands of lives are lost, countless others are forever altered for the worse, and one that forever changes the way we live.

But, what if . . . such a tragedy could be undone? Imagine the incredible intellect of Reed Richards combined with the miraculous technology of Victor Von Doom’s time machine, with Reed travelling back to select moments in time, strategically and surgically altering events to prevent this tragedy while taking great care not to unleash even greater destruction. 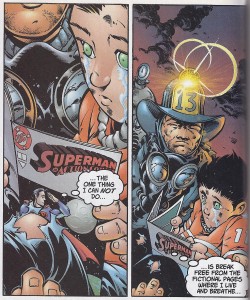 Or, what if . . . such a tragedy could be effectively dealt with? Imagine Superman using his x-ray vision to look for trapped survivors, his breath to put out massive fires, his ability to fly to move victims to safety, and his speed to do all of the above before the tragedy further escalates.

Or what if . . . such a tragedy could be narrowly avoided? Imagine Iron Man or Thor using their technological or enchanted might to commandeer hijacked airplanes before they reach their destination. 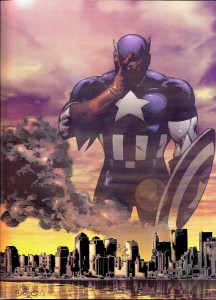 Or what if . . . such a tragedy could be entirely prevented in the first place? Imagine the World’s Greatest Detective intercepting radio, internet, and telephone chatter days in advance, identifying the culprits, and notifying authorities who arrest the terrorists seeking to carry out attacks in New York and Washington DC.

Sadly, in our world, while the catalyst for all of these scenarios was all too true, the wishful scenarios that followed unfortunately were not.

They’re not hoaxes. They’re not even imaginary stories, as they’ve never been told as such. No, the only places these scenarios have played out are in the heads of comic fans.

They’re just dreams. If only these had played out in the continuity of our real lives; I guess I haven’t really changed the subject, after all. 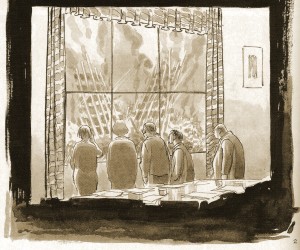 Before those planes crashed into the World Trade Center and The Pentagon, such an occurrence was still largely seen as fictional; in the pre-CGI days of summer blockbusters, such scenes were still relatively uncommon unless filmmakers had a very large budget to build intricate models of U.S. landmarks before blowing them up. No, prior to ten years ago, scenes like these were almost exclusively seen in the domain of comic books, where depicting a national tragedy doesn’t cost any more than depicting a family eating dinner.

Back then, we might see the Baxter Building or the Daily Planet or Avengers Mansion get destroyed, but we likely never though such a thing would happen in real life. And when it did, it was by an entity that was far more evil than Doctor Doom or Lex Luthor or The Masters of Evil; this foe was real.

Before these horrible attacks, their scope was something so massive that they would have sounded exactly like something that would have happened in a comic book. And when we all first got wind that these attacks were happening, what did we momentarily hope and wish for?

That the whole thing was a hoax. A dream. An imaginary story. 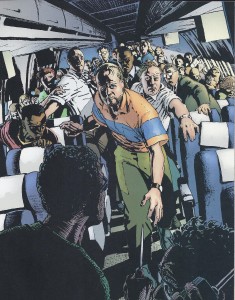 The heroes of United Flight 93 by Igor Kordey

But of course, it was not an imaginary story. And not only that, there was not going to be any Fantastic Four or Superman to come to the rescue. There were no superheroes to save the day. But you know who we did have?

We had super heroes. We had firemen and policemen and other first responders who saved others, many who gave their lives doing so. We had soldiers go half a world away to seek out those responsible, many who have also lost their lives. The passengers who fought back and saved lives. And there was the shopkeeper who let strangers into his store moments before dust and debris from the collapsing buildings would have engulfed them. The nearby office worker who provided water and first aid to the injured. The countless everyday people who donated blood and supplies and gave aid in countless other ways. 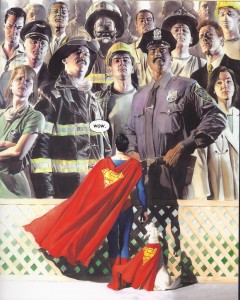 There are no comic books about them.

So the real world has perhaps proven to be no less scary then the ones we’ve often seen in comics. But they also have something else in common: a preponderance of heroes.

And ours are real. Not a hoax. Not a dream.

And definitely not imaginary.