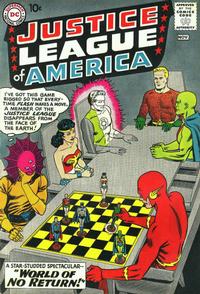 Way back in the late summer, probably during August, of the year 1960, D C Comics published Justice league of America # 1.  Interestingly, the book is not numbered, nor is there a cover date anywhere to be found on the cover.  The second issue was cover dated, January 1961, so I guess issue number one was likely November 1961, hence the guess that the comic was on the racks during August of 1960.

The Justice League was first introduced to the world in three issues of The Brave and the Bold, issues 28, 29 and 30 earlier in 1960, by editor Julius (Julie) Schwartz.  He chose to revive the old Justice Society of America, using the newly created heroes of the Silver Age.  He has said;” To me, society meant something you found on Park Avenue.  I felt League was a stronger word, one that the readers could identify with because of the baseball leagues.”

And Julie placed on his team, Flash and Wonder Woman, who already had solo books.  He also placed Green Lantern on the team, as he had just finished his introductory stories in Showcase.  But who else?  He decided to go with J’onn J’onzz, the Martian Manhunter, who was carrying a backup strip in Detective Comics and also Aquaman, who had a backup strip in Adventure Comics.

Of course, Superman and Batman were also placed on team.  Not quite a baseball team number of players, but a darn good start.  Even though in the beginning Schwartz kept Superman and Batman off the covers and mostly absence from the League’s adventures, as they were already featured in so many other D C comics!  Schwartz certainly didn’t want to be the cause of sales decreasing on the Superman and Batman books!

So that brings us back to Justice League of America # 1, not to be confused by the new Justice League # 1, part of the new D C 52, on the stands right now.  Back in 1960, behind a lovely cover pencilled and inked by Murphy Anderson, featuring The Flash playing chess, with his fellow Justice League members as chess pieces, against a strange, three-eyed alien.  And the alien is thinking to himself, that he’s got the game rigged, so that each time the Flash makes a move, a team member disappears!

The story is written by Gardner Fox and is entitled; “The World Of No Return!“.  It is pencilled by Mike Sekowsky and inked by Bernard Sachs.  Oh, by the way the alien is named; Despero.  A great name for a villain!  The story begins with the individual JLA members staving off some disaster or another and the Flash discovering a couple of green-haired aliens, who have fled to the Earth, to perfect a weapon to use against a tyrant named Despero, who rules their world, Kalanor, by mind control.

Flash sets up the aliens in a cave and rushes to the Justice League’s secret sanctuary, only to find Despero already there!  He already has the other Justice League members under his mind control, but “being a sportsman”, Despero has decided to give Flash a chance and challenges him to a game, not exactly chess, but played on what looks like a chessboard.  Flash’s game pieces are small figures of his teammates.

As Flash plays, the individual members of the JLA are teleported to another dimension, where they face life and death adventures!  but apparently, Despero couldn’t send them each to a different dimension, as he sends two members to the same dimension.  Wonder Woman and Superman end up in the same dimension.  Aquaman and Green Lantern end up together, as does Batman and the Martian Manhunter!  And working together with each other, they all survive Despero’s plans.

But which hero saves the day?

That a great question!  In fact it’s none of the heroes, nope Flash doesn’t win the day, nor any of the other top-notch heroes, its regular ol’ human, Snapper Carr, the JLA’s “honorary member”!  You see, he has sneaked on board Despero’s ship and he manages to turn Despero’s energy-absorbing machine on the villain.  And of course the Justice League then arrives back on earth, with absolutely no explanation of how they managed to return.  Oh well, that’s the Silver Age D C comic book mentality!  A far-fetched solution from out of the blue!

That wraps up issue number one of the Justice League of America.  I give it only three (3) out of five (5) Legion Flight Rings.  The story is marred by the ending and the Sekowsky artwork is nothing special, simply serviceable.  Just how did he manage to draw the JLA, with his odd “wide-shaped” body style, for so many issues?  I’m sure you’ll agree that Jim Lee‘s new Justice League looks a lot better!